My experience with the Presonus S6 so far has been great, with mixes translating much more seamlessly.

Having just run tests and posted a review of the PreSonus PRM1 measurement mic, where I used my relatively new (6 month old) Sceptre S6 monitors, I noticed they had been reviewed on Gearslutz only once, 3-1/2 years ago when they were a fairly new product. Using the Sceptres for my mic tests eliminated phase issues from the LF and HF drivers due to their concentric design. But beyond that the Sceptres are truly fine speakers in their own right.

I noticed the previous reviewer had bought his Sceptres to replace a pair of Equator D5’s - which is exactly the same speakers I replaced (though I used the D5’s with a subwoofer which provided me a good full-range system). I also saw he used some kind of RTA measurement program, but did not indicate anything about the room used for testing, whether it was treated at all, whether the mic he used was calibrated, etc.. I also noticed the RTA plot shows significant roll-off below 250 Hz, which does not ‘jive’ with the S6 specifications or my measurements. So I thought I’d add this update, and show what the Sceptre S6 can do as measured by a calibrated measurement mic in a well treated room.

Calibrated?
If you have read the PRM1 review you know that it is not provided with calibration data, but was very flat "out of the box". However, since I fine-tuned the calibration of my PRM1 against a mic with a precise calibration file, I created my own PRM1 correction file. So until they drift out of calibration (hopefully not for a few years!) I’ve got two calibrated measurement mics in my mic closet.

Back to the Sceptre
As the previous reviewer indicated, the Sceptre S6 have excellent imaging. And they provide extreme detail. In a well treated room their frequency response is impressive down to 50 Hz or so, below which they roll off as any good 6.5 inch (16.5 cm) LF driver should do! But they are not down 30 dB at 50 Hz as the RTA plot in the previous article implies. 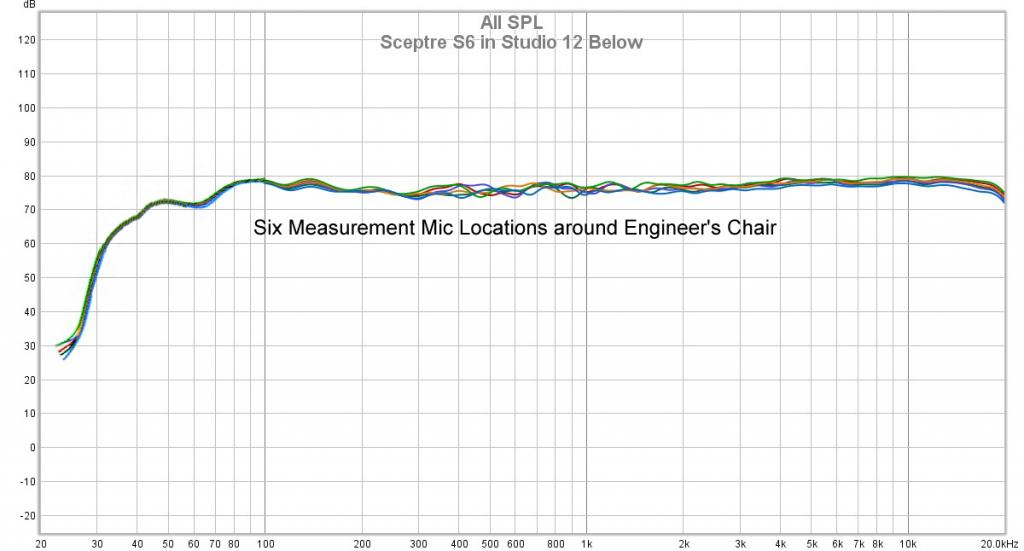 I see fairly flat response down to about 50 Hz, with 40 Hz down about 10 dB and 30 Hz down over 20 dB. The bumps in these curves, typically about +/-2 dB, are room related rather than speaker contributions - above 300 Hz you can see variations caused by measuring in slightly different locations caused by interference of reflected sounds. All measurements were taken within a few feet of the optimal listening position, so the bumps in the lower octaves don’t “shift” around like the higher frequencies since the wavelength below 100 Hz is over 11 feet (3.4 metres) and the change in mic locations has little effect on the standing waves that are still present in my treated room. I’d still bet the peaks and dips below 100 Hz are also caused by room resonances. And unless you mix in an anechoic chamber with a perfect set of speakers, you will always have some dips and peaks - a couple dB will not compromise mixing ability!

If you are looking for monitors in this mid-price range, and want to hear the most minute details in your mixes, you should audit a pair of these at your local audio dealer.

I was looking for an upgrade from the Equator D5's for my small home studio setup. My mixes on the Equators never translated very well, particularly the low end. My space requires front-firing bass ports due to adjacent walls, so my shopping list was short. I was also sold on the coaxial design having been an Equator owner. I bought these on a whim hoping they'd work out.

So far, I have no complaints. My mixes are translating much more seamlessly. My mix notes from car listening have gone from 7-8 items to 2-3, and these days they're more like "adjust delay on guitars" versus "where did all that bass come from?"

The speakers are large and very deep. They have plenty of power and they are dead silent at idle. The available adjustments are logical and easy to use, though everything is on the back panel.

Imaging is excellent. As mentioned, lows seem very accurate for the kind of music I'm doing (alternative rock, roots). For club music you'd likely want a sub. There is a bit of a peak in the high mids, sort of the heart of the vocal range. It's notable when mixing, but doesn't seem to create issues in translation.

This is an RTA I took using pink noise: 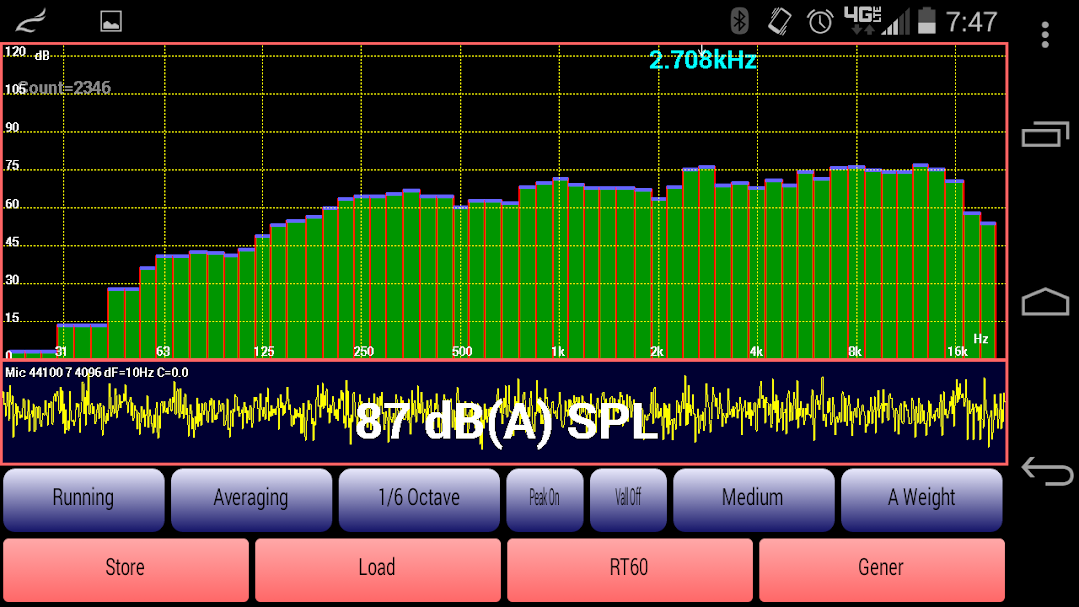 Recommended if you're shopping in this price range.