Probably the best digital live console that fits in a 19" rack.

The Digico SD11 is a small digital console thought (mainly) for live applications (there's also a version, which is simply a software "upgrade", for the broadcast world).
Let me first start with saying that in the last 10 years I was touring Europe with several bands and I encountered tons of analog and digital boards on my road..(as I guess many of you doing this job).

Also let me state that I'm an analogue guy, I like how an analogue mixer blends, and I love the functionality of an analogue board..fast and easy..especially in some genres (reggae), analogue is great for fx's and dub stuff.. that said, the nice analogue boards are quite heavy to carry around, big and/or still rather expensive (soundcraft 8000 or Midas XL series), for touring live with "small" budgets, digital offers some great features nowadays.

The version I had the pleasure to test was already fitted with the "i" version software, so it was an SD11i, which offers some more features like: all the 32 channels could be either stereo or mono (it doesn't matter to the console, this tells you about the processing power of this little desk), more channels with the dynamic eq's, and more multiband compressors channels, it also has 6 channels of tubes emulation (that you could turn on or off, you could change the bias and decide how hard to drive it).

I was using a Digico D-Rack with the SD11i, so I had 32 inputs and 16 outputs (since the D-rack was fitted with another 8 channel optional output module) which made the setup a breeze.. 1 CAT5 cable connected the console to the D-Rack..and that's it.. literally 5 minutes and all the inputs and outputs were connected..I think that this, together with the recallability, is one of the biggest advantages of digital desks in the live world (no more heavy 48 channels multicores to lug around).
I had a gig with a reggae band that I'm touring with (ZonaSun Official Web Site) and that was the perfect occasion to put the sd11i through its paces.

Digico is very well regarded in the industry for a good reason.. this console (as the other ones in their SD series) sounded fantastic indeed.. I won't bore you with the specs that you could find on Digico's website.. The preamps sounded pretty good.. you plug in the mic..1, 2, check and the sound is already good.. heh

The thing that caught my attention the most is how great the 4 band eq is.. no matter how much you have to carve out from the signal, it always sounded good, it always has a sort of body/liveness to it.. it's hard to describe.. I was very impressed with the eq, and dedicated knobs for hpf/lpf on every channel is a godsend heh

The dynamic eq is another very cool tool that helps in some situations, like controlling some nasty gtr freq's or some peaky vocals better than you could do with a regular compressor. The compressors were nice and easy to dial in, rather clean unless I needed to crush them. (I only used them on a few sources).

The digitubes are another added bonus, I didn't use them on vocals.. I liked the "clean" preamps better, but on the clavia keys (organ, rhodes etc..) they might help to "warm" them up a bit. You could tweak them as you like with bias and drive, they might be useful to dig a specific "dirt/distorted" sound on vocals or instruments too but this wasn't my case.

The FX were also pretty good.. this is where other digital desks usually fall short.. I honestly didn't have too much time to "play" with them..so I didn't try them all, I used a plate, a hall and a tap delay (assigned to one of the 8 macros buttons).

The 15" touch screen is fantastic.. everything is layed out in a very intuitive way, it's like an analogue channelstrip.. and the touch'n'turn knob is fantastic, very fast and easy to dial in.

Overall this desk is a little gem, the feeling and the sound are first class as are the other Digico consoles, it sports the same sound of the bigger brothers at a very reasonable price and fantastic portability. It's also well built, it feels good, very solid.

I was a little bit worried about the number of faders:12 ..but with some smart grouping and the fact that you can layout the desk in any way you wish, it was not a problem at all.. At the beginning I found the master level on the knob a little weird (but it's also always in the master bank).. but at the end of the day I really loved it.. I don't usually touch the master (unless for some small changes at the very beginning of the show).

This desk made my job easier with a very tight band that I know quite well.. I couldn't be happier..

The power supply is hot swappable, that means that if your power supply goes bad, you can simply take it out and put in a new one, it's also very small, so can be shipped easily. Very clever design. I think it's the same power supply for all the SD series (they also have an optional external power supply that can be used for redundancy).

Digico also does the UB MADI which offers to record all your tracks (I think up to 56 channels) through the MADI connector on the SD11 (it can also work with the other SD consoles line up) to any USB pc/mac.. Small, light, built like a tank, usb powered, fantastic and very well done piece of gear that adds a lot of functionalities to your SD11 or any console in the SD range without lugging around tons of cards/pc/cables,racks,etc..

There are few digital desks that are somewhat at this level: Soundcraft Vi series is pretty good sounding too, very clean preamps and nice fx's, but the workflow is mind boggling to me (nothing that you could not learn, but IMO it is not so intuitive) and it comes at a higher price, it's not so small either. The other one is the Midas PRO series, which has a nice feel, but again it's not 19" rackmountable and has no touch screen (even if they intended it that way), the different types of compressors are pretty cool though.
Not much competition at that price/quality level. (studer and stagetec hit at a completely different price market).

I think that at this price range (with or without D-rack) there's nothing that comes close to the features and sound that this board offers.

I think that there are a couple of small details that could be addressed.. the fan for exemple.. I'd say that for any pop/soul or rock act this is not an issue at all.. but you could hear it only in VERY quiet small rooms, so if you do some acoustic or jazzy stuff in small places, the fan might be annoying, but I was reassured from Digico that the fan could be changed with a more silent one.. So again there's no reason to worry.

The FX while being nice could be another place where improvements could be done.. some special verbs and delays could be added in the future via software upgrades, as well as some special comps maybe?.. But in all honesty nothing is missing or misplaced.. you know what I mean..

For sure there's space for some small improvements, but Digico has done a tremendous job with the SD11.

I'd like to thank Digger at Digico and Gilberto Giacon at MGM audio (Swiss distributor for Digico) for giving me the chance of testing out the SD11i.

disclaimer: I don't work for DiGiCo (I wish.. heh ) nor MGM audio, this is just my experience with the Sd11i.


here are some pics: 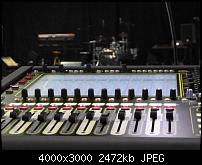 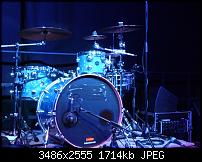 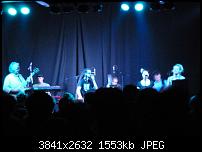