The endgame for metal drums.

Metal is arguably one of the genres that better suits the use of virtual drums, and that’s both in terms of the sounds and of the playing style itself. The machine-like nature of modern metal sees to translate reasonably well to MIDI programming, and the supernatural sounds present on many hit records are usually a product of heavy processing enhanced with layers of samples, so it comes as no surprise that plug-ins are doing very good job on delivering truly convincing e-drums for all sorts of metal projects.

Over the years we have seen many libraries devoted to the genre, and since the early days Toontrack set themselves apart as one of the finest sampled instruments developers in this segment, with their flagship Superior Drummer and EZ line of virtual instruments taking a market-commanding lead that rightfully reflects the quality of their work. Despite this privileged position, the company is not resting on their laurels and the latest proof of their fine work is the Area 33 SDX, a new metal-oriented expansion for Superior Drummer 3 that packs a ton of (pun intended) heavy content. 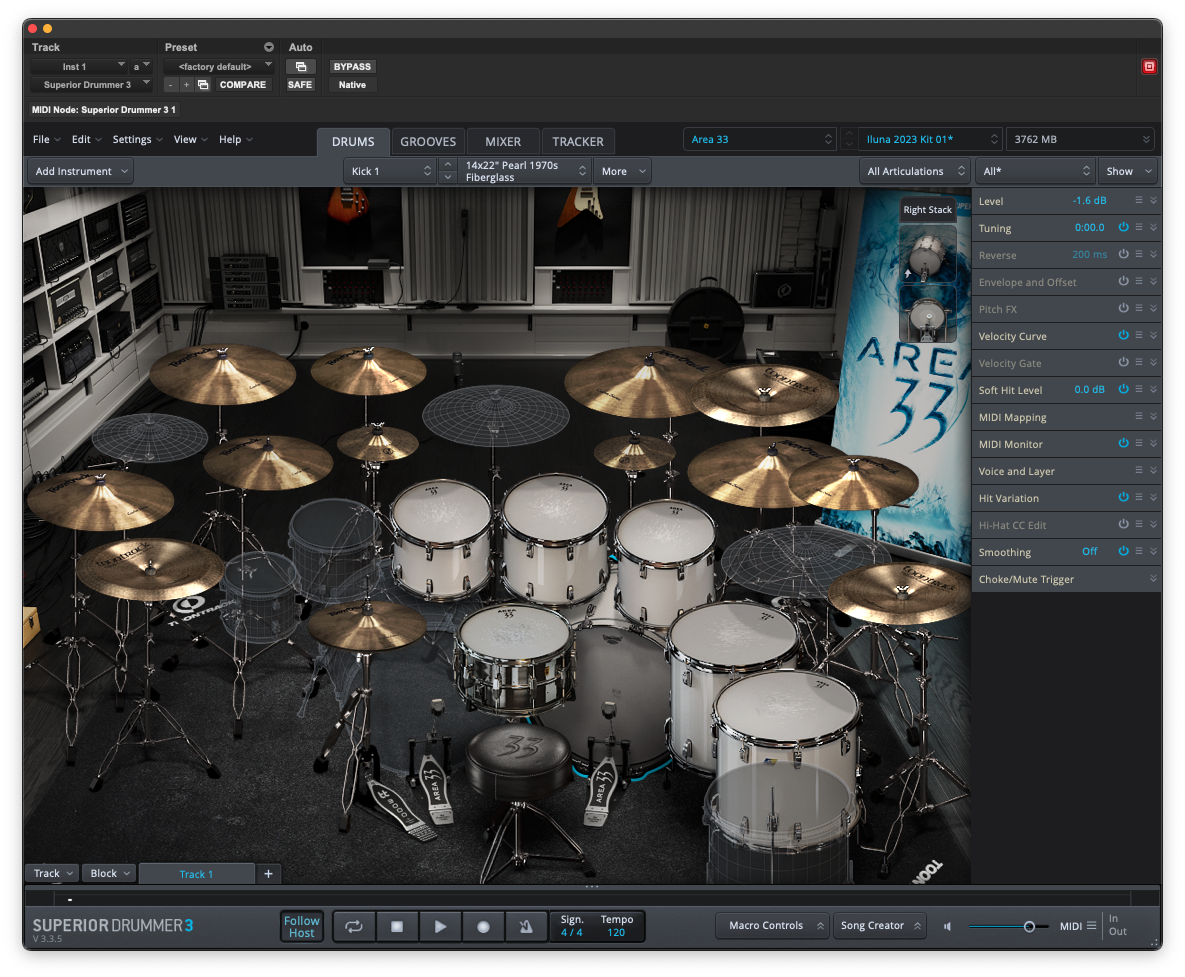 For the monumental task of capturing these kits in their full glory, Toontrack enlisted the services of none other than Meshuggah’s guitarist Fredrik Thordendal and producer Daniel Bergstrand, who engineered and produced successful metal acts such as Behemoth, Soilwork, Dimmu Borgir, Abbath and many others. Bergstrand’s contributions were not limited to the sampling process of this SDX as he also contributed with many presets. Thordendal’s private “33” studio in Stockholm was the location chosen for the recording process and lends the name to this expansion pack.

It’s worth reminding ourselves that Thordendal and Bergstrand were part of the original Drumkit From Hell team, so in this regard Area 33 is a sort of spiritual successor for the now “vintage” drum library that started it all for Toontrack, and one that was considered by many to be one of the first truly convincing sampled drums for metal, the entry point for a whole generation of producers back in the dawn of virtual instruments era.

As with previous Superior Drummer expansions, Area 33 also features a new MIDI library with many grooves and rhythms, and these were done by Leo Margarit, who since 2008 holds the sticks for the progressive metal band Pain of Salvation.

Area 33 is centered around seven brand-new drum kits with many different configurations ranging from six to ten pieces (without a snare or cymbals). Each kit is quite unique and there’s a good variety of shells to choose from here, made from different materials such as maple, aluminum, fiberglass, stainless steel and others. We can have up to five rack toms, three floor toms, fifteen cymbals, one hi-hat, and this time around we actually have two kick drums, something which wasn’t available on Superior Drummer 3’s base library. There’s a grand total of 14 different kicks, 13 snares, 24 rack toms, 18 floor toms, and over 40 cymbals to choose from, which includes 3 hats, 4 rides, 20 crashes, 8 chinas, 5 splashes, 4 stacks and 2 bells. This is arguably the most comprehensive set of metal-focused drums to date and everything was specially sampled for this SDX, so even those pieces who are making a comeback (like the Ludwig Black Beauty Brass Snare) were recorded once again in this new configuration in order to have all pieces properly matched and coherent.

It’s not all about the drums themselves, and the microphones have also received a special treatment from Toontrack. We now have stereo mics for all kit pieces and 11 room mics to choose from, including an external mic placed in the studio’s garage as shown below: 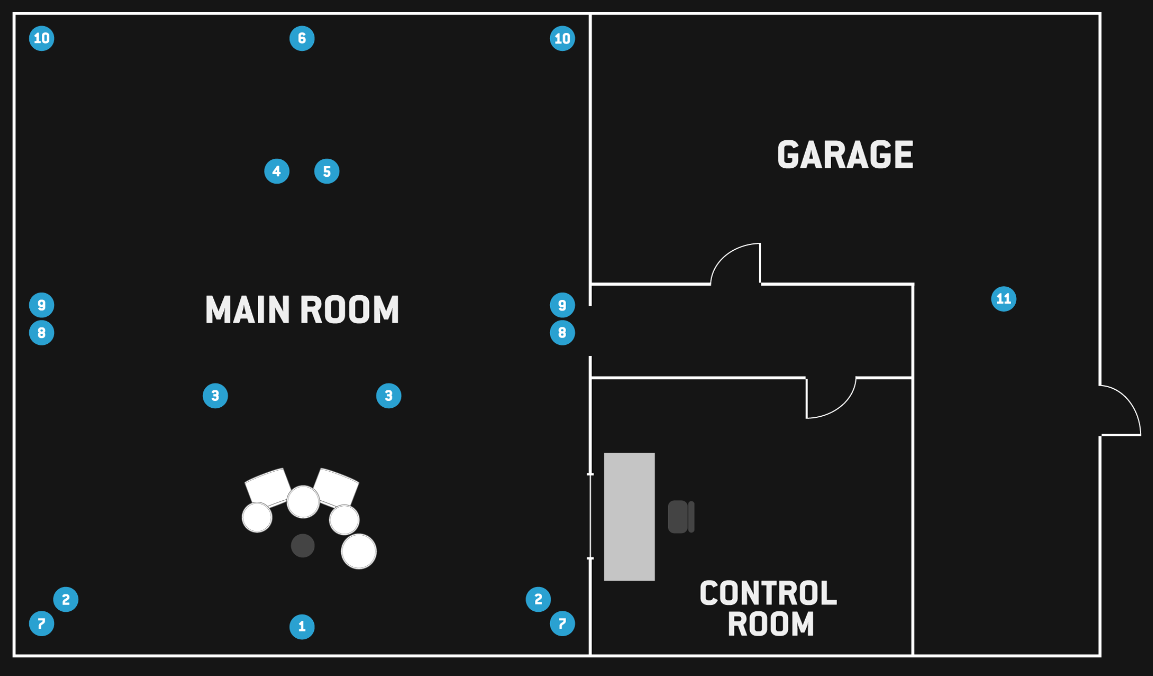 As with other Superior Drummer 3 expansions, Area 33’s kits are fully independent and can not be loaded alongside the base kits - we have to select one and go from there. However, drums, cymbals and samples from other libraries such as the base kit or other SDXs can be added through the X-Drums or stack features.

Sound quality: This SDX is stunning, with excellent drum sounds that will serve nearly all metal subgenres, which is nothing less than we expect from Toontrack. They are at the top of the drum-sampling game for good reasons, and Area 33 further extends their lead on the metal genre.

Ease of use: If you’re already familiar with how Superior Drummer 3 works, it’s a breeze and there’s not much else to learn other than the new microphone options. If this is your first time around, then there will be a learning curve of course but it shouldn’t be a steep one, this is certainly one of the most friendly virtual instruments out there and it’s quite intuitive to use. I’d only make one objection here due to the high RAM and storage space consumption, but that’s inherent to sampled instruments with this level of detail so it comes as no surprise. Nevertheless, 16GB of RAM should do just fine for most, and depending on the session and drum kit configurations one might even be able to get away with less when using smaller kits. As a measure of reference, the kit pictured above takes 3.7 GB of RAM, and although it doesn’t use all available slots for cymbals or toms, it is quite a big one!

Features: A feature-rich expansion that could easily be sold as a standalone product given how much it packs. My only gripe here is that there’s no second hi-hat on the right side of the kit and there’s no second ride on the left side, and both are pretty common on many metal setups these days. We can add those through X-Drums of course, but then we would miss the realism of the properly matched overheads. Not a big issue in my opinion, both it’s worth mentioning nonetheless. As for the variety of sounds, it's one amazing expansion in all aspects but I do feel that it could have more diversity in the hi-hat department, as there's some overlap between two of the three models available. Other than that it's a vast palette of cymbals and shells that should keep most satisfied for a long time.

Bang for buck: Area 33 is easily the most comprehensive metal-oriented expansion for Superior Drummer right now, so it’s basically in the no-brainer territory for anyone working with metal. Metal does have an insane number of subgenres and numerous niches, but Area 33 packs what it takes to cover nearly all of them with ease.

Recommended for anyone producing or mixing metal. This crowd will certainly enjoy these kits and they will benefit the most from this SDX, but don’t rule it out for some styles of modern rock as well.

Pros:Cons:
Review this product Get the facts