An Extremely Flexible but easy to use Granular Processor

Arturia have done it again – a new FX processor that makes granular “re-synthesis” a doddle. As it says on the tin, “Efx FRAGMENTS breaks the process of granular synthesis down into easy-to-use modules that intuitively interact with each other”. Have those clever Arturia engineers really made granular processing fun and easy?
>>
>>
>>

What is It?
First, in case you haven’t played with granular synthesis or granular processing, what is it? Granular synthesis is a special application of sampling – sampling that operates using very small time slices. Typically samples are split into segments in the range of 1 to 100 msec in duration – these are the grains. Multiple grains can be layered on top of each other and these layers may play at different speeds, forward or backward, with varying phases, volume, and frequency shifting, among other processing. Depending of these factors the results may be slow evolving sounds, unique modulated tones or rhythmic effects.

While most people think of this sound creation technique as a modern digital effect, it was, in fact, first performed in 1959 by Greek composer Iannis Xenakis using analogue tone generators and tape splicing! So having a plug-in like Efx FRAGMENTS (Efx from now on) that can create granular effects in real-time, and allow you to vary any of the many possible parameters while sound is playing, is certainly a doddle! And as I found, Efx is designed to make granular processing straightforward and logical, much more so than a few other granular tools I’ve tried.

One synthesizer that includes granular processing is Arturia’s own Pigments that was described in great detail (by me) in the April 2021 and January 2022 Gearspace reviews. Efx has obviously borrowed some of Pigments concepts, but takes granular processing far beyond. Of course Pigments has many more sound processing and generation features with its analogue sound engine, its digital wavetable generator, its sample engine, and the uniquely designed harmonic engine. But it cannot process sounds from external sources, which is where Efx comes in.

What Does It look like?
Efx is arranged in six functional sections in the basic view as seen above: Macro controls (Intensity & FX dials in upper left), the Buffer with a functional graphic display, Grain Capture control, the Grain Release control, Pan and FX controls, and Global controls. An Advanced view can be opened which provides access to defining macro control, an envelope follower, three custom function generators and and a step-sequencer. These advanced controls are reminiscent of Pigments. 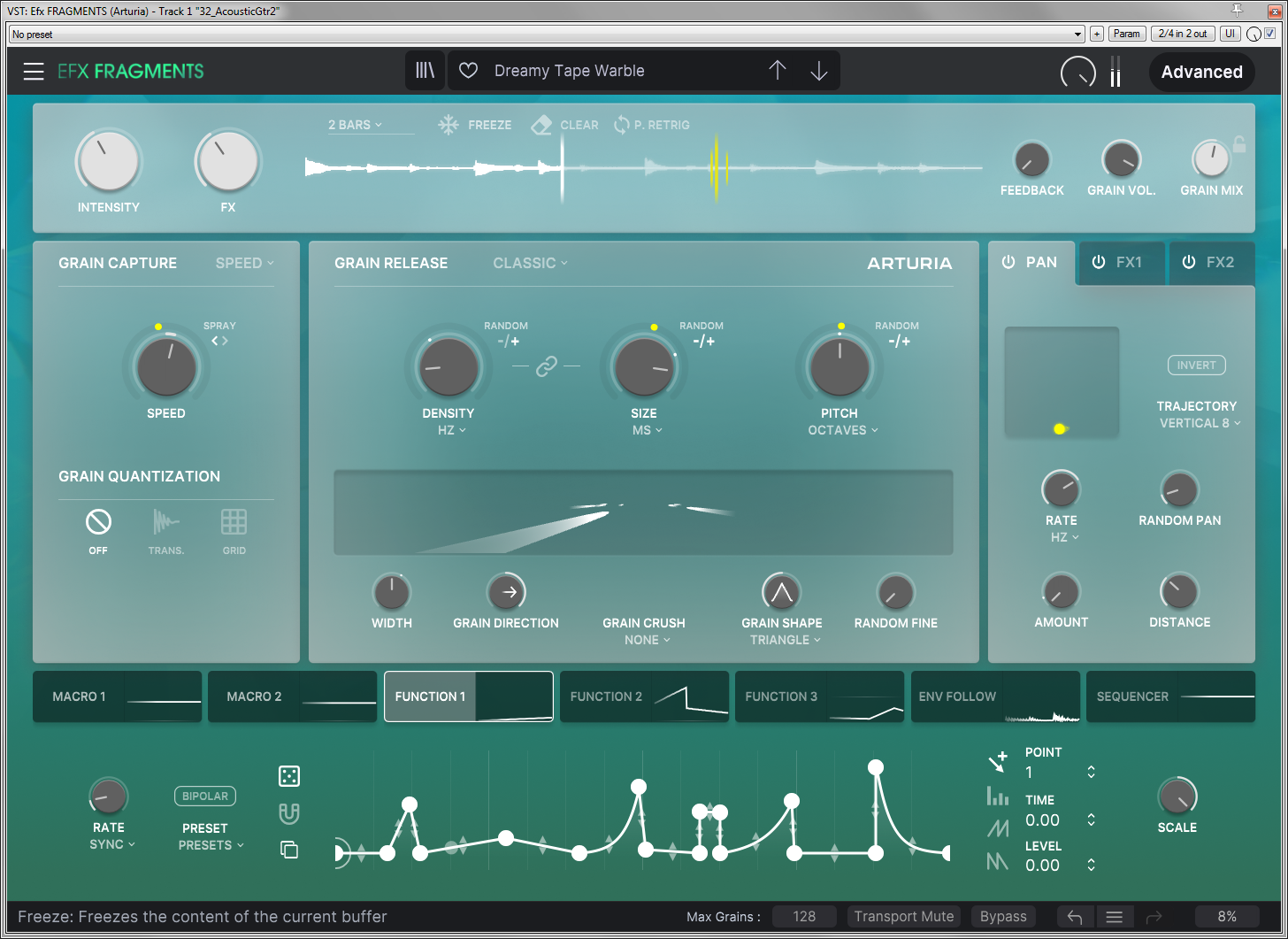 The Buffer section graphic above the Grain Release panel is very informative: there is a waveform display of the audio captured from your DAW and sets of vertical lines scanning across the waveform that display different real-time functions of Efx including the position of the “record head”, the position of the “playback head”, and momentary instances of grain extractions from the waveform. Fascinating and useful stuff!

A really helpful feature of Efx are three selectable modes in the Grain Release panel for different musical purposes: Classic, Texture, and Rhythmic. The Classic mode includes the most flexible set of granular synthesis parameters and enables an extreme range of FX from delicate enhancement to total sonic destruction. The Texture mode provides controls optimized for creating continuous textures, washes and drones. And, not too surprisingly, the Rhythmic mode is designed to facilitate making rhythmic patterns. I found these modes to really facilitate creating styles I wanted.

There is also a "Visualizer" in the Advanced view of the Classic and Texture modes, shown in the lower section of the Grain Release panel. This is a perspective-style view that shows the output of the processing with grains beginning closer to you and then receding toward a vanishing point. This view illustrates the processing results, showing density, size and pitch information by location and shape of the graphic images. 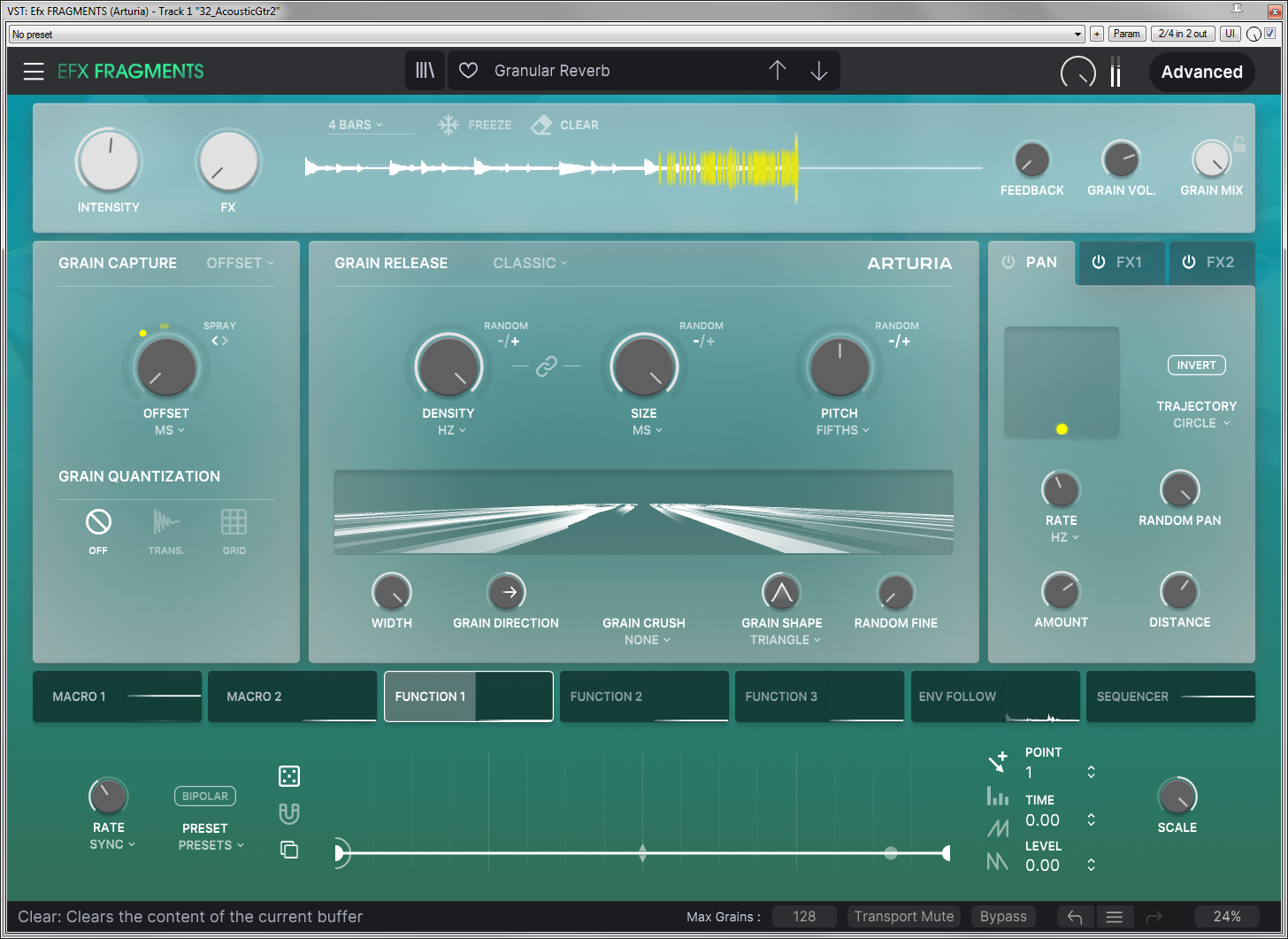 And there is a lot more when you access the various control panels: an advanced auto-panner and spatializer, a bit-crusher, a multi-filter, a distortion module, compressor, delay, a pitch-shifting delay, a tape echo unit, reverb, chorus, and flanger FX. There is also an envelope follower and a 16-step sequencer that can be used as a modulation source for many destinations. And you can control the maximum number of grains used from 3 to 256 (less grains creates thinner FX and reduces CPU needs). Far too much to describe here (and I’m still ploughing through the user manual!).

Making it Easier
I found I was able to quickly create some wonderful effects even before trying to read the user manual, and another Arturia feature really helped when I wanted to try some of the more advanced features. Efx includes very handy interactive tutorials that walk you through different functions of the plug-in. This is a feature Arturia are incorporating in many of their plug-ins, and considering that the user manual is 75 pages long (English version) and there are over 75 specific functions described, the interactive tutorials are a great help.

Other nice features: in addition to an Undo/Redo mode there is a History window available that provides a step-by-step account of every move you have made in Efx! There is an excellent Preset browser with many ways to browse, sort, and organize Presets. The GUI can be resized from 50% to 200%, and there is a handy “Maximize” feature that will resize and re-center Efx to optimize your available screen space.

Conclusion
Arturia continue to inspire me with their creations and Efx FRAGMENTS is one of their most impressive. In fact, I’ve never been as impressed with granular synthesis as I have been with Efx, after using it for just a few hours (and barely scratching the surface of its capabilities). Arturia engineers really have made granular processing fun and easy. Take a look and listen to the examples at Arturia using the link below.

Pros:
Easy to use right out of the box and with an extremely comprehensive range of controls that can keep one happily occupied mastering all the possibilities for days, weeks, or more.

You can use DAW automation to control over 200 possible parameters.

Excellent Preset browser with filtering by type and style, factory and user banks, and preset descriptions.

Great range of presets to help get started with useful effects.

Real-time graphic plots of both input waveforms and processing functions, and output elements that help visualize how sounds are being manipulated.

Both Undo/Redo and History window to track any adjustments you make in a session.

The Tutorials mode is very informative and can help you quickly learn the more advanced functions.

The comprehensive user manual has 75 pages of descriptions and examples.

Cons:
Not really! But it might be nice to have another color scheme or two available for more contrast of the control legends.