DDMF make a number of fine audio processors and utility plug-ins, but only two have appeared in Gearspace reviews. As I mentioned in the Plugindoctor review, I often use DDMF compressor and limiter plug-ins, particularly their NoLimits lookahead limiter and the NYCompressor. In December of ‘21 DDMF released an update, NoLimits2, and I found it to be far more capable than the very useful NoLimits – it even has EBU R128 loudness measurements built in. 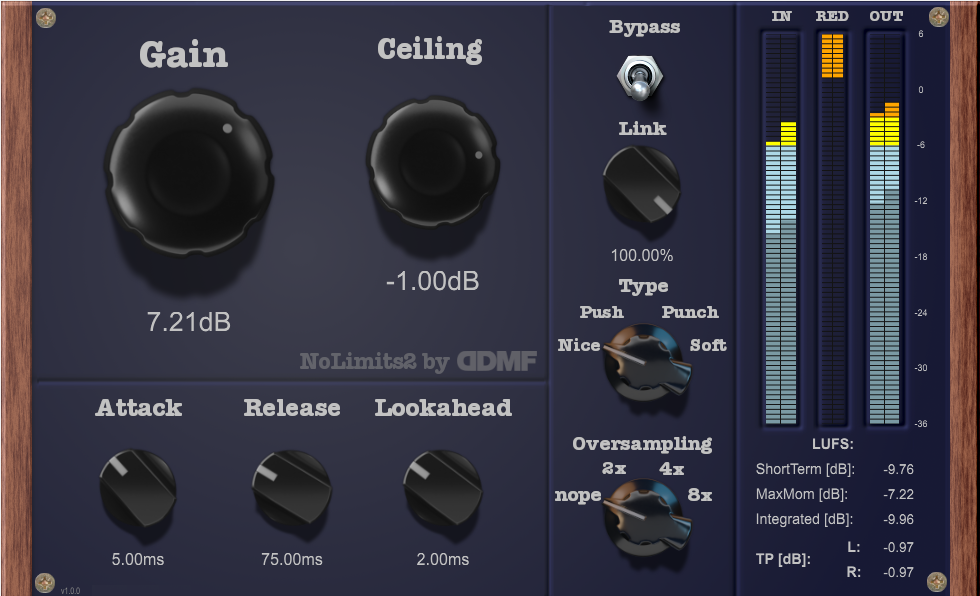 What is It?
NoLimits2 is a limiter (surprise!) with several unique features. First, it can act as a brick-wall limiter with essentially an infinite compression ratio, but it can also provide a gentle compression mode (Soft Type). As the original NoLimits, there are both attack (0.01 msec to 2 seconds) and release controls (0.01 msec to 5 seconds) and a lookahead adjustment (0.1 to 100 msec). But the first thing I noticed is metering on the right side of the clean GUI window, and the Type and Oversampling controls. Metering includes input level, gain reduction and output level – with measurements according to EBU R128 standards using LUFS (Loudness Units Full Scale) although the meter legends state ShortTerm (dB), MaxMom (dB) and Integrated (dB) which is not strictly correct in modern loudness nomenclature. However, since a 1 dB change is equal to a change of 1 LUFS, this is not a big issue! I checked the metering and I found it is accurate to the EBU standards, the readings being in LUFS.

The Type control is also new, and very effective. The four settings yield distinct colouration (or lack thereof) to the sound and create specific deactivation of the attack, release and lookahead controls. Nice and Soft have all three controls active while Push turns off Lookahead and Punch deactivates (or rather automates) Attack and Release. 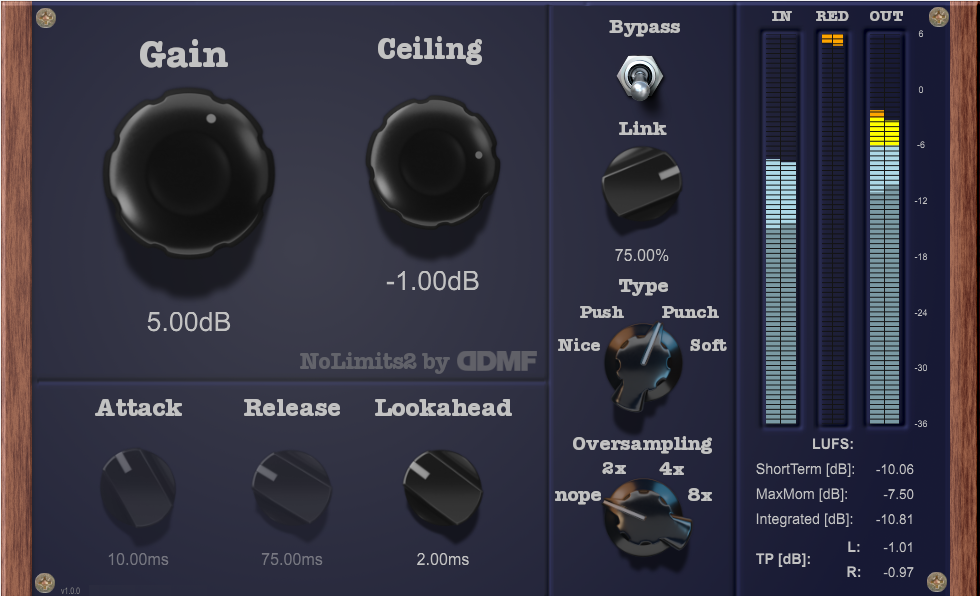 Punch greys out Attack and Release times leaving the previous values showing, but actual times are automated in this mode.

The Type also affects the compression ratio – the Soft mode provides a gentle 2:1 ratio (approximately – it varies with level) until the output hits the ceiling value, while the other three modes provide brick-wall limiting with extremely high ratios. And the Push and Punch modes create harmonics, though the Punch mode also creates non-harmonics (non-integer harmonics and aliasing) if the Lookahead level is set very low – I measured harmonic distortion over 10% along with some fabulous crunching effects. At the highest Lookahead setting Punch creates essentially no distortion. So with Punch, the signal level, Gain and Lookahead can be combined for some exciting effects, great on bass, electric guitars and drums. The Push mode creates only clean odd harmonics with mild THD levels in the 0.1% range when the signal level is pushed. I found that Nice and Soft create no measurable harmonics or aliasing. 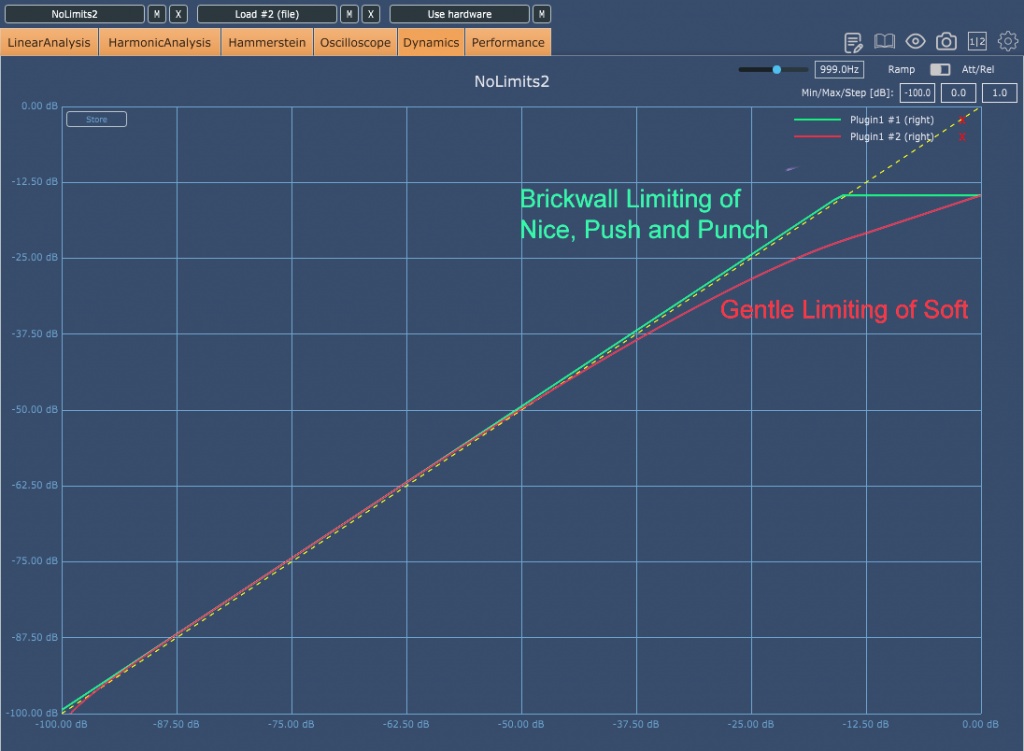 As a result, each of the four Types can yield distinctly different tonal results on a given source signal. And while you may think of a limiter primarily for use on a full mix, as the last processor in the signal chain, I found a few instances on buses or tracks could create some fun and useful results. As you can see later in the Technical summary, NoLimits2 does not use any significant RAM space and little CPU resources unless you go full-bore on oversampling.

Oversampling is there if you think you need it – I found results were fine with the “nope” mode, but depending on the source sounds and settings you may want to run 2x, 4x or 8x and take the CPU hit they create (roughly 2.3 times, 4.3 times or 8.8 times the “nope” mode). As many engineers have stated, if it sounds good, it is good, and using oversampling just because you read somewhere that it eliminates aliasing (which is said to be “bad”) may be pointless. I found that other than the very "colorful" Punch mode, aliasing and non-harmonics were down over 90 dB in the worst case (without oversampling) which is inaudible – and actually oversampling improved the situation only a little. The case for reducing aliasing is that if many processors in a mix project are adding aliased signals, they can combine to an audible “noise” level. But many audio plug-ins I’ve tested in the past few years create extremely low to absolutely no aliasing without using oversampling, so I’ve found little need to increase the CPU load with most plug-ins I use.

OK, there are also two large knobs, the biggest is Gain, and the smaller is Ceiling. These are as they were in the first NoLimits, a gain boost that pushes up the source signal level and a limit to the output level. In most cases if you mix/master music to be played on streaming services, you’ll want the Ceiling at -1 dB (some streaming services and other delivery systems want -2 dB or lower levels). However, when used on a track or bus you may want to set this much lower, like -12 dB or whatever level you like to use on tracks or buses in a mixing project (keeping in mind that the sum of all these will be louder than each element – for example 16 uncorrelated tracks each at -12 dBFS will sum to just over 0 dBFS). Then you can crank up the Gain until you like the results. The higher the Gain, the louder the output and the lower the dynamic range (true peak to LUFS level). On tracks like bass guitar I sometime crank Gain up so that the output level is forced to be very even and using a Type like Punch can really make bass cut through a mix nicely. The Attack, Release and Lookahead values can also make a big difference to the resulting sound, so along with Type you can find a wide range of sound sculpting in addition to level control. BTW, if Lookahead is set to its minimum value of 100 usec, I found that fast transients could slip by the Ceiling level – I just set it to 10 msec and nothing slipped by. And since the latency of NoLimits2 is from about 100 msec to 200 msec (except for Push which has zero latency and no Lookahead adjustment) setting the lookahead to any value does not increase latency.

The last two controls are Bypass (obvious use) and Link, which is a continuously variable stereo link – at 100% both channels react the same even if one is driving harder than the other. At 0% the left and right channels are independent (dual-mono) which can create more motion to a track, which may be good or bad depending on what you are processing.

Technical
Available in 32 and 64 bit formats (VST, VST3, AU and AAX ). Windows 7 and above. Mac,OSX 10.7 or higher (Intel and Apple Silicon are both supported). Will soon be available for iOS in the AUv3 format.

CPU load varies with Type setting and Oversampling: with no oversampling Punch used 0.12% in a REAPER test, while the other three types each used about 0.35%. Oversampling as I already indicated can increase this up to 8.8 times, or 1.06% for Punch and 3.1% for the other Types. Latency also depends on Type: zero for Push, 4,800 samples for Punch, and 9,600 samples for Nice and Soft (at 48 kHz sample rate). RAM usage is nil – one instance uses less than 20 MBytes of RAM and multiple instances use even less per instance.

Pros
A very flexible limiter with EBU R128 compliant loudness metering that can run the gamut from clean, gentle signal levelling to nicely saturated brickwall limiting and on to brash, crunchy distortion.
GUI is clean, simple and comprehensive.
Very small RAM footprint and low CPU load unless you push oversampling to the max.
Reasonably priced.

Cons
Nothing that bothers me at all!

Last edited by Sound-Guy; 3 weeks ago at 06:44 PM..
Review this product Get the facts