Muscle Shoals’ FAME (Florence Alabama Music Enterprises) was founded in 1959 and is still in operation today. It is considered by many recording artists to be the "hit recording capital of the world" and in the realm of Blues, Soul, Rock, R&B and Country music, it certainly is. Although you may never get to Alabama to record at FAME, you can get the vibe of this iconic studio in your own studio now. 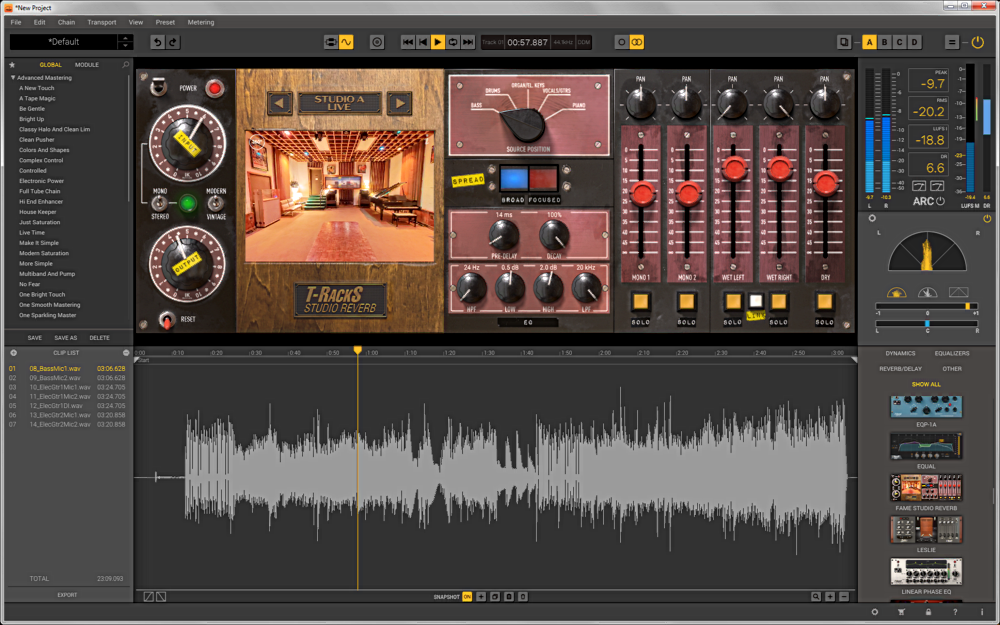 What’s in the Studio?
FAME is a module for the IKM T-RackS 5 mix and mastering workstation, and also a separate plug-in you can use in your DAW (VST2, VST3, Audio Units, and AAX). It requires a 64 bit CPU and operating system. There is no separate module to install – you must update the entire T-RackS 5 program to add FAME. With the improved IKM Product Manager I found installation simple and fast – although it depends on your Internet download speed, it took me only 30 seconds to download the 2 GB of code, and in another couple minutes it had automatically installed and authorized the new T-RackS 5 version with FAME.

While IKM’s excellent Sunset Sound Studio Reverb has only a few variations in each of it’s rooms, booths, and chambers, FAME Studio Reverb has captured both mic type, mic placement and performer positions as well. You can select which instrument type you are processing and FAME will adjust both mic and source position in the room. And you can select a “spread” mode (broad or focused) for the resulting reverberation of its two live rooms and five iso booths. This is not just a width control, but provides different reverb tonal qualities across the stereo field. There is also an EMT plate reverb and a newly restored echo chamber that IKM engineers actually helped revitalize to its original acoustic condition.

. . . . . .FAME Studio A live room with Source Position control near the top-middle set to piano, Spread control below,
. . . . . .room Pre-Delay and relative Decay control down next, and EQ controls at the middle bottom. The five faders on the right
. . . . . .include two for the extra room mics, two for the wet reverb level and one for the dry signal level.

In addition, each room has two console choices. Nominally Studio A uses a Neve 8232 console, while Studio B has an SSL 6056 E, but you can switch to use FAME's original Universal Audio 610 console, a rare hand-built unit from FAME's earliest decades. One big difference between the modern consoles and vintage 610 is harmonic distortion with the modern units measuring extremely low (THD under 0.0001%) and the vintage unit providing much richer harmonics up to about 0.25% THD depending both on signal levels and on the Source Position setting. The choices of mics, positions, and consoles add up to 62 possible variations, and that’s before adjusting EQ, reverb pre-delay or relative decay times.

There is both a dry level control and two reverb (wet) mix controls that also have pan position knobs so you can adjust the reverb level and stereo image width. In addition, when mixing the sound of the live rooms with your source material, FAME provides two faders with pan-pots for mono room ambiance, which can be added to the stereo signal or used alone, just like engineers have done for decades at FAME itself. I found these two mics contribute different relative levels of odd and even harmonics when used with the vintage 610 console which expands the tonal range even more.

Like the Sunset Sound Studio Reverb, there are colorful images on the left side that let you view each room, booth or chamber all round, up and down. This however does not affect the sound in any way – just a cute addition to let you see the rooms as they are.

There are the usual preset window (with 31 factory presets in three categories) , Undo-Do controls, and A/B/C/D quick comparison switches at the top of the GUI. And the GUI size is continuously adjustable from about 850 x 380 pixels up to the full width of your screen (2560 x 1200 pixels in my studio).

How Does It Sound?
I first tried FAME on a full mix and the results were excellent as a simple overall reverb enhancement, but the real power of FAME is to use multiple instances on tracks and/or buses with appropriate Source Position settings in different rooms and booths, as well as using the plate reverb and chamber when desired. I tried individual tracks of bass, guitar, piano, drums and vocals with the suggested Source Positions and the results were excellent in each room and booth. I also tried “inappropriate” combinations of source material and FAME Source Positions with different, but equally impressive results. I found the plate reverb to be excellent and the echo chamber can add a nice dimension to some solo instruments or vocals.

In use you could employ an instance of FAME with booth or chamber for vocals, several live room instances with different Source Positions for piano, guitar, drums, etc. and maybe the EMT 140 for a solo instrument. You can use any combination you choose, and using several instances expands the possibilities to the extreme. The only downside is having so many options across multiple tracks or buses requires considerable mixing skill, but even a newbie can obtain excellent results if they stick to a few instances. And if you are worried about CPU load or RAM requirements, check out Tech Details next.. . . . . . 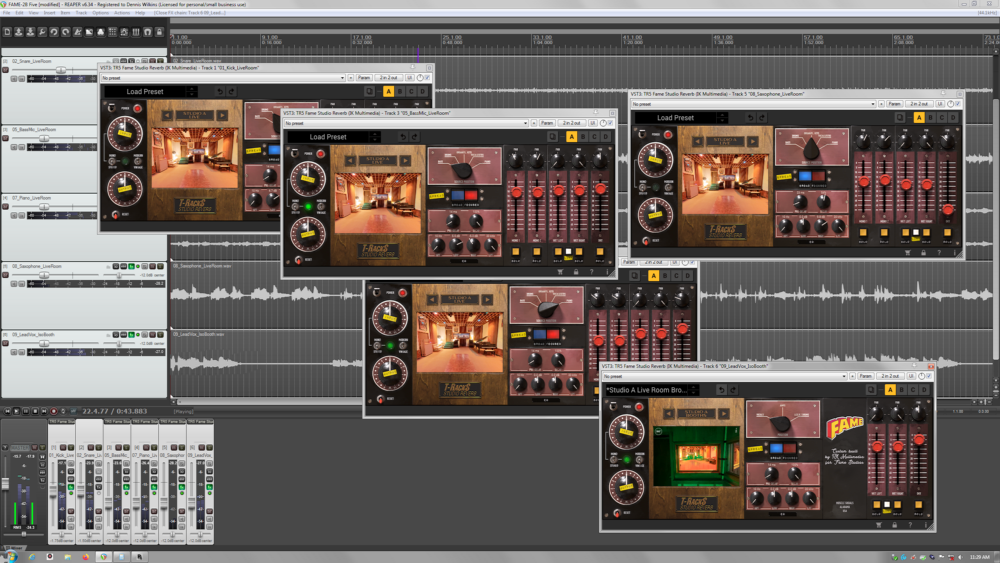 Tech Details
I was impressed with the efficiency of FAME – in my test system (PC Audio Labs Rok Box PC with Windows 7, 64 Bit, 4-Core Intel i7-4770K, 3.5 GHz, and 16 GB RAM) the CPU load varied from about 0.25% to 0.65% depending on settings used – booths use the least CPU, live rooms the most. Latency is near zero (3 samples it seems – a 63 microsecond delay at 48 kHz!). One instance of FAME uses about 580 MB of RAM , but as with other software I’ve used over the years, multiple instances only slightly increase RAM needs – I found five instances of FAME used about 640 MB of RAM and less than 3% CPU. And 16 instances, filling all the instrument and vocal buses in my normal mix template, pushed FAME’s RAM usage to 950 MB and CPU to about 4.6%. However, this was a stress test and I doubt I’d want to juggle FAME controls on more than maybe half a dozen buses in a real project!

Pros
The iconic FAME studio sound in your studio with excellent audio quality as you’d expect from IK Multimedia.
Very flexible recording environments that replicate the miking, room conditions, and location of the performing instrument/vocalist for a range of instruments and vocals.
Works both in the T-RackS 5 standalone “mix and mastering” shell and as a plug-in in your DAW.
Low CPU requirements and moderate RAM usage – no problem using multiple instances.

Cons
Does not include Aretha Franklin, Little Richard, Wilson Pickett, Etta James, Otis Redding, or Alabama – you must supply the musical talent yourself!