It is rather amusing to think about the fact that the Waves SSL 4000 E Collection was introduced 15 years ago. It was one of the first plug-in emulations of what is perhaps the most revered channelstrip of all time from one of the most iconic analog mixing consoles ever made, and it was the very first that could run in our computers without the need for external DSP. At this point, many records have been done with these plug-ins, and given their popularity, it’s not far-fetched to say that, in cold numbers, more records have been done with them than with the desks they mimic.

Fast-forward to 2001, and the need for an overhaul was long overdue. The graphics were very dated, the GUI was rather small for current displays and computing power has come a long way since then, same goes analog circuit emulation, allowing for more accurate recreation of the original sound character. Enter the Waves SSL EV2 Channel, a second take on modelling of the famous “4k” console featuring a redesigned (and resizable) interface, two EQ options on the same plug-in, merging what was previously done on two separate plug-ins for the E and G series consoles, switchable analogue harmonic distortion and width control of the stereo field (on stereo instances).

Most of these upgrades are self-explanatory and I don’t think we need a rundown on what the SSL strips are, but for those who are a bit lost on the EQ options, a few quotes from the EV2 user manual helps to clarify the differences between these two EQs: introduced in the original SSL 4000 E Series Console, the “Brown (Knob EQ) sound can be pronounced, even gritty” (...) “Black Knob EQ was introduced in the mid- 1980s, along with the 4000 G Series consoles. It is cleaner and a tad more open than the Brown Knob." In a nutshell: Brown is a wider EQ and is considered better suited for reshaping. Black is narrower, which is usually what you want for scooping. Each has a distinct sound. So there we have it, and I’d add that Black is a bit more “modern”, whilst Brown sounds a bit more “vintage”, but nevertheless, this is SSL - we’re not talking about “Neve” levels of color here. 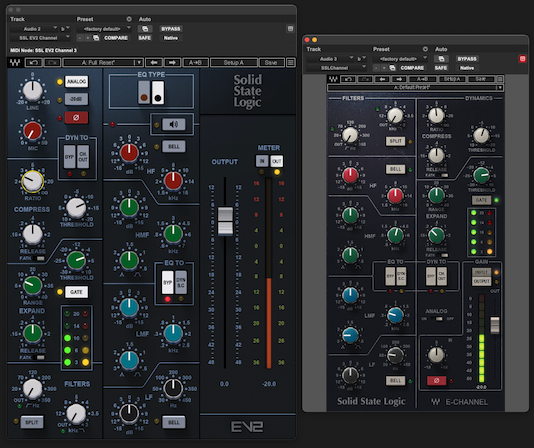 Waves SSL channelstrips side by side (EV2 on the left).
The scores:

Sound quality: Don’t expect a night-versus-day kind of difference here when comparing EV2 to the first-gen, it is more of an incremental improvement than a complete overhaul. The new analog modelling did change the sound but not drastically and to me EV2 sounds slightly more polished, but as Waves themselves stated, it is a difference of “color” more than anything. Nevertheless, "pushing" this new plug-in feels rewarding in a sense that the old ones fails to achieve, and the new code certainly has a "mojo" that wasn't there before - a quick trip to Plugin Doctor can confirm this. In that sense, EV2 is closer to CLA MixHub in terms of sonics, and some may have a hard time telling them apart - I feel like EV2 has an edge, but I'm not sure I'd survive a meticulous ABX test. Nevertheless, if you enjoyed the first version of these plug-ins, you’ll probably enjoy EV2 as well, although that itch for buying it may vary depending on your GAS levels. If you didn’t like the first version, then EV2 (or any SSL-style strip for that matter) is probably not for you.

Ease of use: The learning curve of SSL channel strips in general is not a steep one, but it does take a bit of time to get used to the EQ curves and behaviour of the dynamics section, which is quite deep considering it can do compression, expansion and gating. This hasn’t changed of course, but with the new graphics and resizable interface it is more pleasurable to use this new version, and it looks really good regardless of the screen size and resolution. What is not very pleasant is the fact that we have to click on a switch to swap between input and output feels, it feels a bit clunky when we could have both on the screen simultaneously. In terms of system resources load, EV2 is heavier than the old channelstrips, but setting up that virtual console with many instances on a session remains viable, although at a higher CPU cost. As a reference, 24 mono instances of the EV2 on ProTools 2021 took roughly 15% out of my Mac Mini M1 on playback with a 48k sample rate, whilst the old plug-ins took less than 5%, which is not a negligible difference. Lastly, unlike the first Waves SSL channelstrips, there’s a bit of latency this time around (60 samples at 48k) so keep that in mind if you’re doing any tracking with it.

Features: I always felt that the E-G series EQ situation should’ve been addressed as EV2 does, with a simple, elegant switch. Having separate plug-ins was, to my eyes, hard to justify, and even back in 2006 it was perfectly viable from a computing capacity to have both Brown and Black EQs in the same plug-in, so hats off to Waves for finally doing this. On the other hand, the rather cryptic way of routing the EQ, Filter and Dynamics sections remains untouched, and since SSL themselves gave up on it for a much more intuitive system, I don’t see why Waves hasn’t done the same, and in that sense it’s a missed opportunity. Same reasoning applies to the meters as mentioned above, and it’s also something that SSL went for on the latest update of their channelstrip plug-in, so Waves could take that page out of their book too. Other than that, it is a good plug-in that extended the feature set of the previous version with meaningful additions.

Bang for buck: Although the retail price of $249 is a bit on the steep side, it is widely known that no company out there does sales like Waves does, both in terms of “frequency” and “amplitude” of the discounts, so one can always wait for the perfect opportunity (which happens often) and grab it at a (substantially) lower price. It’s important to note that the EV2 is a brand new release which does not replace the old Waves SSL channel strips, it’s really an additional plug-in, but owners of the SSL 4000, Studio Classics, Pro Show or SD7 Pro Show bundles will get EV2 for free, as long as they are covered by an active Waves Update Plan.

Recommended for: fans of channelstrips in general and anyone into the “SSL sound”.