A quick fix for our stereo-mono struggles.

NUGEN Audio has built quite a solid reputation over the past years. The brand is mostly active on the post-production and mastering fronts but it also develops some excellent music production tools. The resumé for their comprehensive plug-in portfolio can be summarized as “high-fidelity, trustworthy, focused yet flexible”, and there’s a clear common denominator that serves as a signature for the company—it's not into mojo, colour or analog modelling, but instead opts to make the most of what digital technology has to offer. NUGEN is all about delivering plug-ins that are transparent in sound and precise in control, with a clear sense of the company’s strengths and a strong awareness of where they are meant to be used—NUGEN’s plug-ins are “application-oriented” like few others.

The Focus Elements Bundle is perfectly aligned with the premise described above, but here we have NUGEN approaching from a new angle: extreme simplicity. This bundle takes three of their most successful plug-ins—Monofilter, Stereoizer and Stereoplacer—and trims them down to their core, offering only the essential features in a cost-saving package. Here’s what we get: 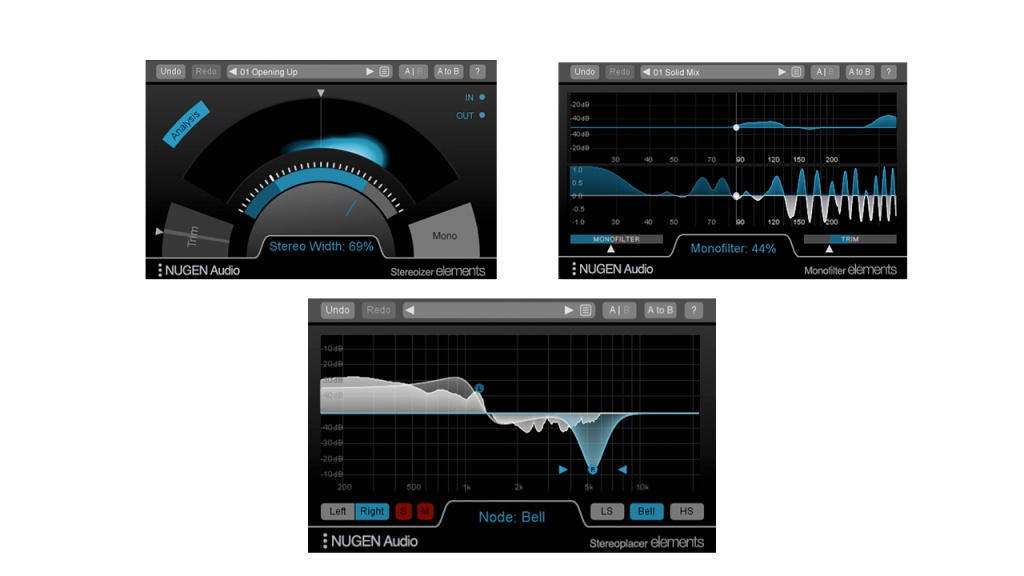 Sound quality: These are very good sounding plug-ins, in their respective areas they are at the top shelf when it comes to sheer sonic quality. Stereoizer and Stereoplacer are both surprisingly natural, and given the fact that many processors in this category are a bit fake or over the top, they are valuable additions to a mixing or mastering engineers’ plug-in folder.

Ease of use: There’s no way to go wrong here and all three plug-ins are as straightforward to use as it gets, with an economic CPU load that allows for multiple instances without hogging a project. The only minor gripe to be found is the GUI size, which is rather small and without a resizing or alternate size option. This is a particularly glaring issue with the Stereoplacer Elements and its large operating range of +/- 40 dBs, so a little goes a long way when dragging the control nodes on the graph.

Features: The Elements Bundle is meant to be a streamlined version of their namesake full featured counterparts, so in that sense it’s hard to fault NUGEN for not including features X or Y, but I have a feeling they went a bit overboard and got heavy-handed on the feature-slashing. For instance, as a big fan of Monofilter (which I reviewed here) I was quite shocked to see that what was a flexible and sophisticated bass-management tool became a limited mono-maker with a bass trim option. Same with the Stereoplacer, which was cut down to merely two bands with no linear/minimum phase options.

Bang for buck: At $99 this is quite a tough sell mostly due to how they overlap with other alternatives out there that are often cheaper or even free. For as good as they are, Stereoizer and Monofilter are plug-ins that deliver something which is very common these days, as most users already have the mono-making/stereo-enhancing tasks covered with other plug-ins, including stock plug-ins on some DAWs, so some may have a hard time justifying the investment on them. On the other hand, Stereoplacer is indeed quite unique and finding an alternative for it is a bit trickier and maybe impossible without shelling out a few bucks, so it definitely raises the value of the package, but maybe not quite enough to entice most people. Stereoplacer costs $49 outside the Focus Elements bundle, and I can see some folks going for it instead of the full pack if they already have what the other two plug-ins have to offer. The bottomline is that when we think about the current plug-in landscape, a slightly lower price for the bundle could make it more attractive and perhaps reach a wider audience.

Recommended for: producers, mixing and mastering engineers looking for a fast-paced stereo management solution that may sacrifice a bit on features without compromising the sonics.

Pros:
Cons:
Wishlist:
Review this product Get the facts