"That" effect - with some welcome improvements.

Foreword: “Auto-Tune” is so much more than a mere digital audio effect, it has become a cultural phenomenon, and much like overdrives on electric guitars during the 1960s, it’s an era-defining aspect of music production for the general public. Despite this immense popularity, we haven’t seen many companies try their hand on developing effect plug-ins that are similar to the original one made by Antares since 1996 - Waves and Melda comes to mind, but it doesn’t go much further from that. And before anyone screams “Melodyne”, I’m only counting real-time effects, so “offline” solutions such as the ones from Celemony and others are not within the scope here. Now it’s time for Slate Digital to make their play with MetaTune, a plug-in that pretty much mimics the core functionality of the auto-tune effect but adds interesting twists to the traditional formula.

Hands-on: MetaTune works similarly to other automatic tuners: first a key and a scale need to be set, then speed and sustain will determine how fast the tuning process will be and for how long it will transition to the notes of the desired pitch. In order to help users find out the pitch of the incoming audio, MetaTune has an option to display a “heat map” of detected notes right above the chromatic keyboard, which can be clicked to provide a sine wave test tone with the respective notes, which also helps in finding the right pitch. An optional “note stabilizer” parameter with three timings (short, mid, long) is also available and works in tandem with speed/sustain controls to control pitch transitions. On top of these main features, Slate Digital has added a couple of extra touches that sets MetaTune apart from other plug-ins: groups and doubler. Groups is a function that sets a number of MetaTune instances running on a project to act together and apply the same tuning corrections to all plug-ins within that group, which is perfect for backing vocals or when you have different channels that need the same treatment. MetaTune offers up to four Groups, which should suffice for most projects. Lastly, Doubler is a chorus/ensemble-esque effect that can also make the incoming signal wider in the stereo field. It comes with its own dry/wet control so it’s up to the user whether to use it or not. 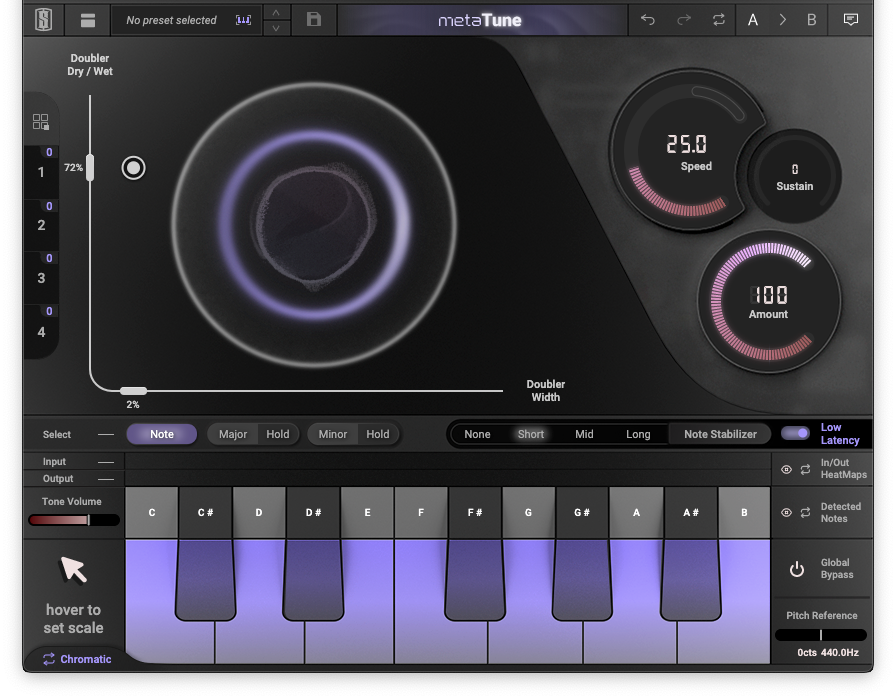 Sound quality: I’ll have to admit that I’m not really the biggest fan of the exaggerated use of this effect, but I do reckon it’s an aesthetic choice, so I’ll evaluate this on the grounds of automatic pitch correction and overall sound quality. On those terms, it’s a really good sounding plug-in that will keep it as natural as possible for most of the not-so-dramatic pitch corrections, and as a doubler/chorus it’s one of the best ones that I’ve tried - to the point that I’d really like to see this element available on a standalone plug-in. This doubler has a lovely sound and I’ll definitely use it on its own i.e. without making any pitch adjustment.

Ease of use: If you’re familiar with the Antares plug-in, MetaTune is relatively easy to use and shouldn’t take more than ten minutes to get good results. In case it’s your first time around this type of plug-in, the learning curve is far from steep and the interface is intuitive enough. The user manual and the handy tooltip system can also help a lot, and both are useful at explaining all the functions.

Features: MetaTune not only covers the major functions one expects from an automatic tuner but takes it a step further with the “Group” function, which greatly enhances the workflow. It also adds a doubler, which is more than icing on the cake.

Bang for buck: If you’re a Slate Digital subscriber then you’re covered, it’s more bang for your buck, even if you’re only using it for the doubler effect. For those who are not subscribers and/or aren’t willing to take such a route, MetaTune is priced at $199 for the perpetual license, which is half the price of Antares Auto-Tune Pro, making it a very enticing alternative.

Recommended for: anyone looking for an alternate take on the (now classic) auto-tune effect or anyone unhappy with the Antares plug-in but still not giving up on having this effect in their plug-in folder.