Back in the early days of home audio studios, before DAWs were a thing, when recording to magnetic tape was the only option, I was very happy to get the first very affordable digital reverb from Alesis, the MicroVerb. It was very simple, crude by today’s standards, but was a real digital reverb! Then, as my part-time audio business grew, I upgraded to an Alesis MIDIVerb with far more capabilities. I sold off both of those early boxes over twenty years ago, but still think fondly of them.

If you haven’t caught the Micro Digital Reverberator (MDR) thread on the Gearspace forum, you should check it out (Micro Digital Reverberator from Korneff Audio) and check out the Korneff Audio site linked below. Dan Korneff and his team have brought the MicroVerb and MIDIVerb back to life with a single plug-in emulation. It includes “Machine 1” which is basically the MicroVerb and “Machine 2” which is about half of a MIDIVerb (more on that later).

Both machines have a common set of three controls, a Dry level, a Wet level and a Pre-delay (up to 150 msec) at the top, with a set of Input and Output trims (Ouptut in the first GUI release, which some people think should be left as is!), access to the user manual and tool tips, A/B comparisons and undo-redo controls along the bottom. There is also a hidden “back panel” access to it’s PC board, a nice green glass-epoxy board with a few extra controls. The two machines differ by their preset selection systems, the MicroVerb having only 16 possible choices (six small rooms/plates, seven large rooms/plate, two gates and a reverse effect) while the MIDIVerb has a digital selector with 55 possibilities (29 natural spaces, ten gated reverbs, eight reverse reverbs, and eight more odd effects). The original MIDIVerb hardware has 99 presets, with the extra 44 being chorus and flanger FX (Korneff wanted to stick to reverbs for now).

That’s it, simple and easy. Just switch presets as you listen to results, and pick what you want. You can separately adjust dry and wet levels, and play with the pre-delay as you wish, but there are not many of the usual reverb controls like decay time adjustment. You change decay characteristics simply by changing the preset. However, there are a few useful extra controls in the hidden “back panel”.

Opening the back panel shows six controls, three small blue “pots” and three drop-down windows. The pot at the left is Stereo Width which can be set from 0% to 200% and affects only the wet signal. This is a fun one – you can add stereo width to a mono track, make the stereo reverberation wider than the input stereo signal, or a trick to help produce some unique sound stages, create a mono reverb on a stereo track.

There is also a pot for Damping (decreases the decay time of the higher frequencies in the reverb relative to the lower frequencies which creates a darkening of the reverberation over time) and a Low Pass Filter (rolls off the reverb high frequency creating an overall darker sound). These are useful adjustments that the original hardware didn’t have. You can double-click on any of these pots to reset to default value. 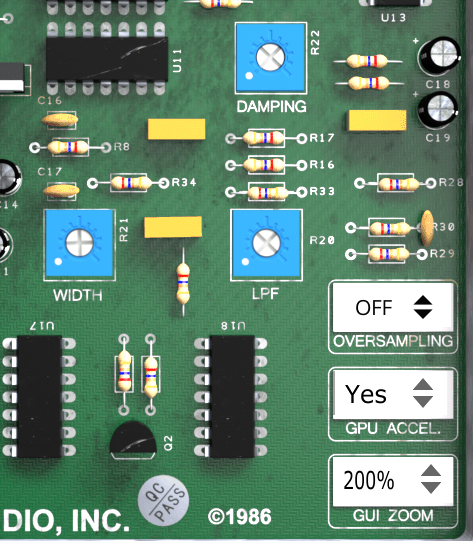 The three drop-down windows control oversampling (I’d say unnecessary since we’re emulating primitive low cost “toy” reverbs!), GPU acceleration (leave ON unless you have problems) and GUI size (from 50% to 200%). Note the copyright date of 1986 – the year Alesis introduced the MIDIVerb and MicroVerb.

There is one more thing you can do with MDR that was unheard of back in the 80’s – you can use DAW automation to control the Dry level, Wet level, Pre-delay, Input and Output trims and a bypass function that doesn’t seem to exist on the MDR GUI itself. And because there are separate Dry and Wet controls (unlike the original hardware and most reverbs) you can vary the reverb level while maintaining the same dry level when using MD in an inline configuration.

How Does It Sound?
In short, there are a lot of really usable reverb effects that sound a little better to me than I recall from my hardware units – but after over twenty years, I can’t really make a good comparison. Some early users of MDR feel the reverberation is on the dark side, so Dan and some users who still have MicroVerbs and/or MIDIVerbs are planning to run comparison tests and see if the results require any tuning – and Dan will provide updates as needed.

As it now sounds, MDR is excellent and can really add some nice, vintage sounding space to drums, vocals, synths, keys, even full mixes in moderation. Some of the presets seem almost magical on snares and drum kits, and the small room presets work well on individual instruments and vocals.

I was also interested in the decay profiles, and found that the shape of the decay varies with Machine and preset used. I tried a comparison of Machine 2 preset 29 which is labeled as a 15 second reverb against a modern high resolution reverb set to a decay time of 15 seconds, and found that Machine 1 preset Large #7 had a similar long decay time. The plots below shows the results. 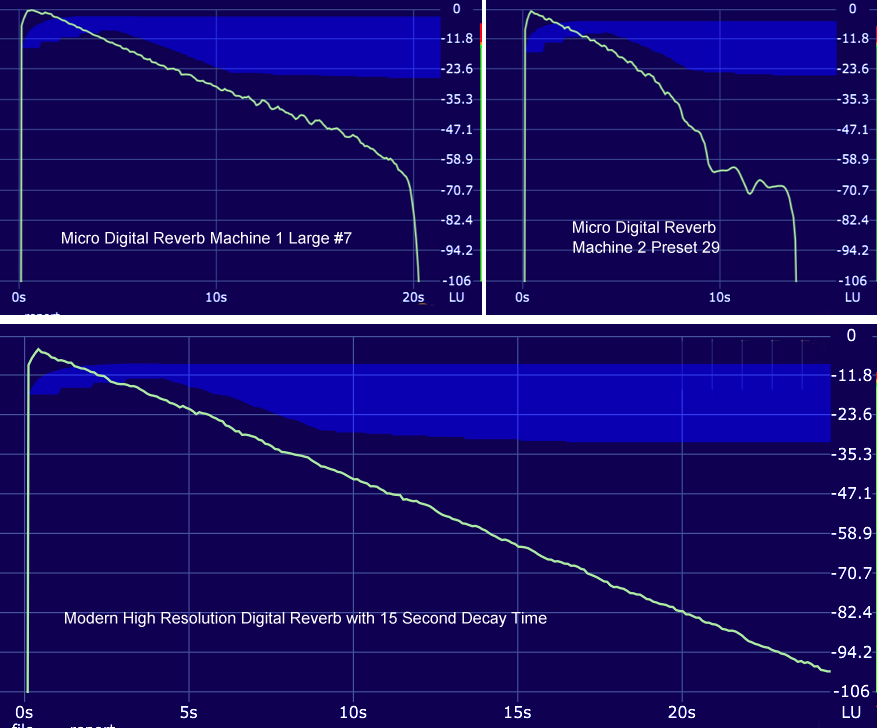 You can see the modern hi-res reverb decays smoothly down to about -60 dB at 15 seconds (the decay characteristics of this unit can be changed, but I left it linear) and continues down to about -100 dB at 25 seconds (and actually continues right down to -120 dB). The “15 second reverb” of Machine 2 (MIDIVerb) is rather strange – it’s linear with time only down to about -30 dB at about 7 seconds, then rolls off faster down to about -60 dB at 10 seconds. Then it bounces around between -60 and -70 dB until at 15 seconds it drops like a rock. The MicroVerb (Machine 1) actually provided a more linear decay down to about -60 dB at 18 seconds, then rolls off rapidly. As I said, I don’t have a real MIDIVerb or MicroVerb to test anymore, so I assume these results are similar to the hardware and might indicate some sort of noise gate was used to prevent digital noise as the level fell below -70 dB which is about the level at which a 16 bit processor will start to sound “frizzy”.

Some Considerations
The Micro Digital Reverberator uses the iLok/Pace authorization system, a system that I’ve dealt with for several years with some good experiences, some not-so-good and some downright terrible. Turns out as I write this, the Pace system is being updated and you might run into issues especially if you don’t have the latest version of PACE. Best to go to iLok.com and download the newest version before trying to run MDR. We certainly can’t blame software developers like Korneff for using methods to protect their work from thieves. It’s a damn shame that there are some people more interested in “stealing” software than making music – if you are using hacked software you should be ashamed of yourself (and your music probably sucks too).

In my test system (PC Audio Labs Rok Box PC with Windows 7, 64 Bit, 4-Core Intel i7-4770K, 3.5 GHz, and 16 GB RAM) Micro Digital Reverberator used from 0.1% to about 0.25% CPU resources depending on the preset used if oversampling was off, and two to three times as much with oversampling on. However, I found the improvement oversampling provides at 44.1 kHz is very small, reducing aliasing a little, but nothing I could detect audibly in a mix. At 48 kHz or higher Korneff suggests leaving oversampling off anyway. Latency is zero at any setting.

Conclusion
A very fun, characterful reverberation processor that brings back the wonderful, colorful 80’s and 90’s vibe at a very low cost. Easy to use, but check out the user manual (click the little book icon at the GUI bottom) for some good tips.

Pros
Brings back the early days of affordable digital reverbs.

Fast and easy to dial in an effect that really enhances drums, vocals and instruments.

Very low CPU requirements so you can use dozens in a project – and zero latency.

Can use DAW automation to control wet mix or pre-delay on the fly without creating artifacts.

Very low cost, even after the September '21 intro deal.

User manual is informative and a lot of fun itself!

Cons
None really unless you want a reverb with detailed control of a dozen parameters.

Last edited by Sound-Guy; 4 weeks ago at 06:45 PM..
Review this product Get the facts