It’s been over six years since a Rob Papen product has been reviewed on Gearspace and he recently introduced the DelSane delay, which might rightly be named the InSane delay. It’s a unit that can go from very subtle delay/reverb effects to totally insane swirling pitchy glitchy mayhem! In spite of already having dozens of delay units I jumped on DelSane because of its comprehensive-looking modulation possibilities and its very low price ($/€ 35). I’m glad I did. It's a winner. So let's have a look. 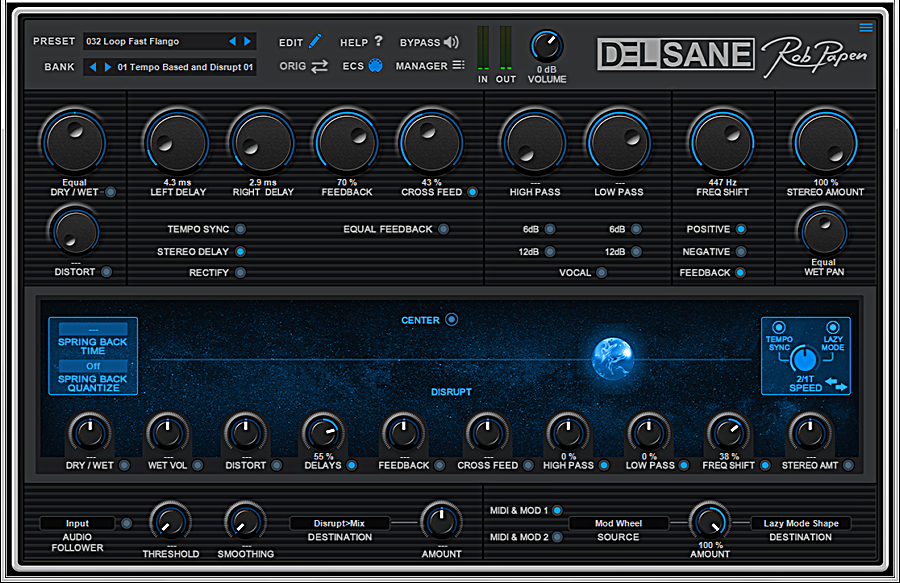 What Have We Here?
As Rob Papen states on the website, “it’s true that the amount of Delay FX available is like the number of stars in the Milky Way!” Which is close to the truth! DelSane has a very clean, single window GUI with about two dozen knobs and about an equal number of “switches” or drop-down windows. If you have used a delay before you can see the GUI has some familiar controls such as Dry/Wet, Left Delay, Right Delay, Feedback and Cross Feed. You also have a Distortion control which applies saturation to the output stage (from very subtle to extreme), Tempo Sync and Stereo Delay buttons, and a mysterious Rectify button. Another “button” off by itself is Equal Feedback. I’ll explain these in time, but over to the right there are high-pass and low-pass controls, and a less common Frequency Shift knob. Below these three controls are 6 dB and 12 dB slope buttons for the LP and HP filters, but also a button marked Vocal. And below the Freq Shift control are three buttons, Positive, Negative and Feedback. Rounding out the top area are a Stereo Amount knob and a Wet Pan control that pans only the wet component, as you would expect.

Most of these controls should be familiar if you are the least experienced with delays, but what are Rectify, Equal Feedback, Vocal and the Frequency Shift group of controls? Rectify maps each negative lobe of a signal to a positive lobe in the delay feedback network which creates extreme harmonic distortion (measurements indicate 100% THD!). Equal Feedback ensures that the left and right channels fade out over the same time period, even with significantly different delay times and/or different feedback levels. I found this very effective to keep effects balanced side-to-side, and is something I hadn’t seen (heard) before in a delay unit.

The Vocal button under the LP and HP filter switches these controls to a formant filter which has one Frequency adjustment to set the filter pass-band (the normal LP control), and a Vowel control (normally the HP knob) that shifts the sonic character of the sound using the formants A, E, I, O or U. This is pretty wild and nothing I had seen in any other delay. 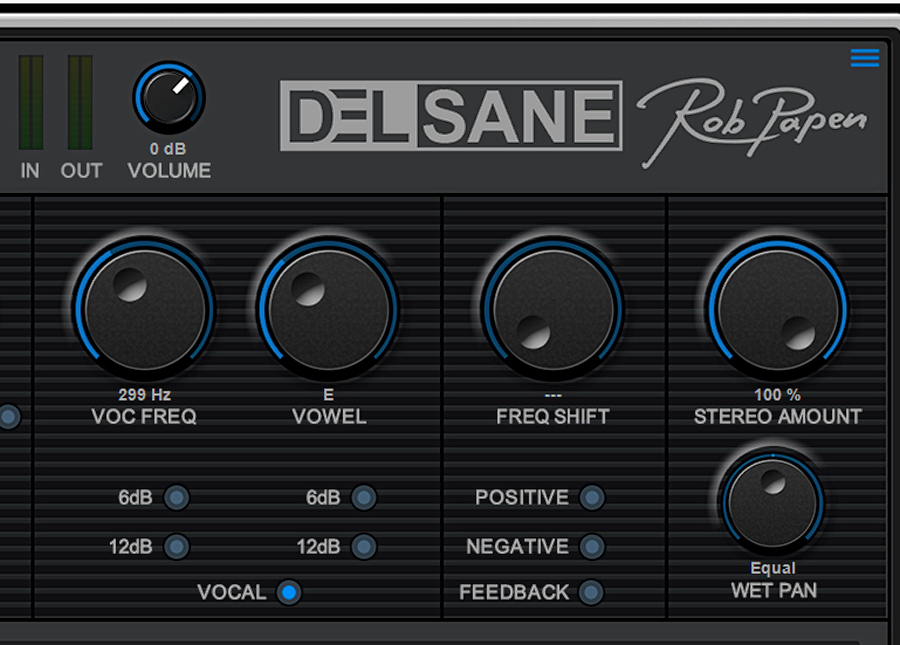 Frequency Shift can change the signal’s frequency as much as +/– 5kHz. It moves the sound’s core frequency by a fixed amount – if you set the Frequency Shifter to +10Hz, then an input signal of 200 Hz is changed to 210 Hz, and an input signal of 500Hz would be changed to 510Hz. Although up to 5 kHz shifts are possible, I found small shifts, under 20 Hz, were most effective unless you want really wild results.

While this may seem about all you’d ever need in a delay, we’ve barely started on what DelSane can do!

More?
The central section, the Disrupt Sphere Slider (DSS), has a rotating planet that can be manually moved using a mouse, or controlled several other ways (see below). There are almost a dozen knobs in this section, and there is another section at the very bottom of the GUI with several more knobs and drop-down windows. 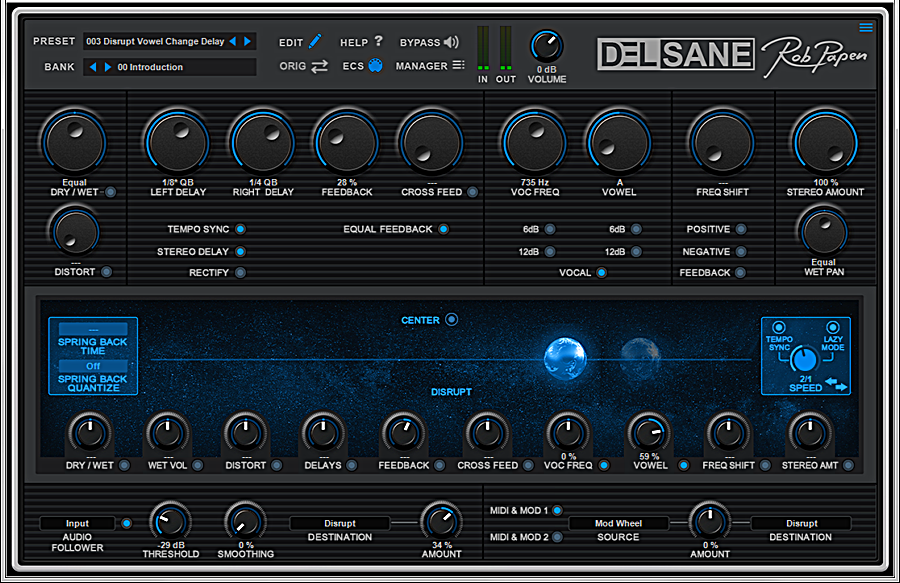 The DSS is a single modulation source that can be assigned to control multiple destinations simultaneously. The planet control can move across the virtual control ribbon from left to right and back, with the center position of the ribbon being its at-rest position where there is zero modulation applied to all destinations – when the DSS is to the left, it reduces the modulation target settings, and to the right increases them.

The modulation target controls, ten of them, are below the ribbon. Each can be enabled or disabled and each has a dedicated modulation amount control that can be set for negative or positive modulation strength. This means that when the DSS moves left (decreasing a modulation targets setting) a particular modulation level can actually increase or decrease depending on the modulation polarity setting. This enables a wide range of varying effects from the single DSS modulation control.

How does the DSS move? There are several ways to position and move the Disrupt-Sphere-Slider. The simplest is to use the mouse to drag it to a position manually. And of course DAW automation can be used to record such movement of the DSS. At the right is a control to select a Lazy Mode function that uses an LFO to move the DSS slider back and forth, either independent of DAW tempo or locked to the tempo. There is a Spring Back control at the left side that causes the slider jump to its initial or center position, either instantaneously or in tempo-based increments.

More Ways to Move
The very bottom panel includes an Audio Volume Follower control and MIDI & MOD modulation control section. The Audio Volume Follower can use the volume level of signals in DelSane to generate a modulation value and has a Threshold and Smoothing control. The resulting control signal can be used to change any of DelSane's parameters including the Disrupt Sphere-Slider position. I found I could even create a distortion “pedal” effect using the Audio Volume Follower to control Distortion level to vary distortion strength with input level. I haven’t seen another delay that can do that! The audio used for this control can be from several sources inside DelSane – the input signal, the delay-only output signal, or the final full output signal. And you can use an external side-chain signal to drive the audio follower, independent of the normal input or delayed output signal, so possibilities are multiplied again.

If you want to use an external digital control, there is the MIDI & MOD section where you can select one of the two modulation slots, then pick a Modulation Source, Modulation Destination, and set an Amount level. There are 56 modulation destinations and over two dozen sources, including internal routing and external MIDI controls. And this method is in addition to using a right-click (Windows) or control-click (Mac) on a DelSane control to open the MIDI control menu. So, while mathematically we can’t say the possibilities of sound manipulation with DelSane are truly infinite, they are likely greater than the number of stars in the Milky Way!

The Usual (and some Unusual) Stuff
Of course there is a flexible preset browser with Banks, a Do/Undo function (though called Orig with control arrows), and a utility window with screen size adjustment (only four sizes, 100%, 125%. 150%, or 200%, but I find that plenty), Computer Keyboard control for preset selection, Dial Animation control, and an Unlimited Feedback control which is ”off” by default. With Unlimited Feedback “on”, the feedback levels are not constrained to +/-100% and DelSane can self oscillate. It can also create very high volume peaks that may be unpleasant for your ears and your equipment. So if you want to switch Unlimited Feedback “on”, do so at your own risk. You have been warned!

There is also a handy Drag and Drop feature – if you drag a control knob from the main Delay or Disrupt section over the Audio Follower window or over one of the MIDI & MOD modulation destination windows, it will set the Modulation Destination to the control you have just dropped – note when you ‘grab’ a knob and start to move it, its setting will change as if you are using the mouse to change it, but as soon as you drop it in a destination window, the knob will return to its previous setting. And, of course you can click on a destination window and pick a destination from the drop-down menu. Not only are there a myriad of modulation possibilities in DelSane, but many ways to set them up.

There are other features like External MIDI Control Capture Mode, External Controller Setup, and hidden functions such as adjustable sample rate and adjustable bit depth for great lo-fi effects. The user manual explains everything reasonably well (although one could write a large book describing how to use all the possible features!). The included factory presets demonstrate a huge range of possible sound processing, from very subtle to outrageous (try Dr. Jekyll and Mr. Hyde, preset 007 in the in the 000 Introduction bank).

Conclusion
A truly fun, extremely flexible delay processor that goes far beyond the traditional concept of a delay. Buy it, you’ll like it!

Cons
Nothing really comes to mind, but if you want to get into the finest details of its MIDI control and modulation possibilities, you will likely need to spend significant time experimenting, but this could also be considered a plus!