More Excellent Audio Goodies from the Past 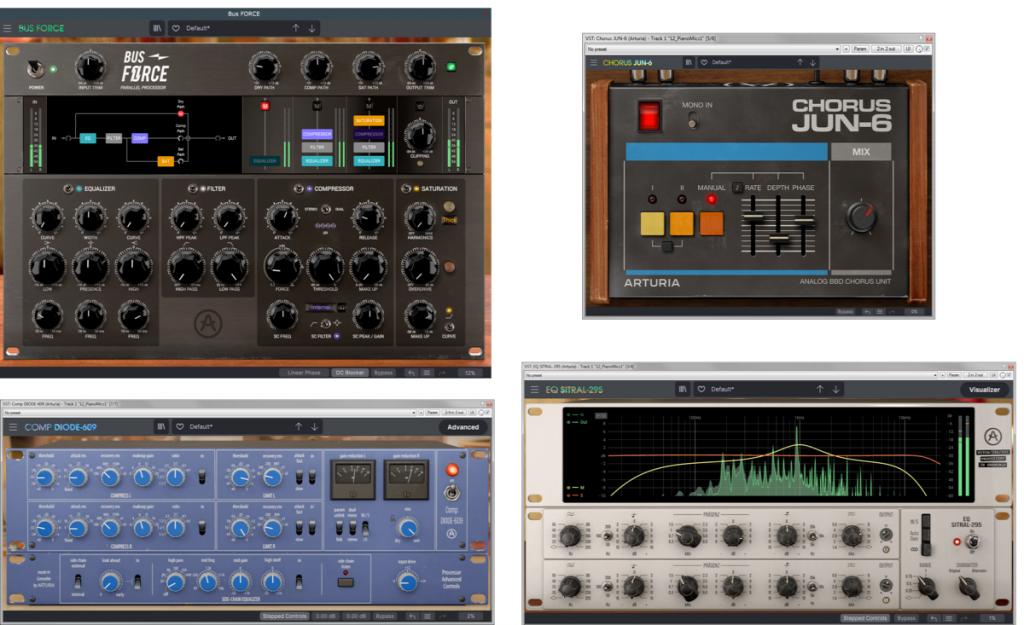 What is It?
The FX Collection 2 (FX2) is a bundle of 22 plug-ins, all of which are truly excellent sounding and very flexible devices. It includes five compressors, three delays, three filters, four modulation units, three preamps with EQ, three reverbs, and a classic stereo EQ.

Fifteen of these are from the original FX Collection, three are added from the 3 Modulation FX You'll Actually Use bundle (reviewed at Arturia 3 Modulation FX You'll Actually Use) and four are brand new “classic” processors. The new units include an Arturia original multi-processor mix bus unit, a diode-compressor based on the famous British Neve® 33609 compressor design, a stereo EQ based on the classic ‘70s Siemens™ broadcast console and a classic Roland Juno-style chorus unit. In addition, the Delay TAPE-201 from the FX Collection has been enhanced with a choice of preamp circuits, and the preset browsers for all modules have been updated to the same style as used in the V Collection with expanded filtering options to select both factory presets and to save your own.

Take a look at the reviews listed above if you haven’t previously done so. That will bring you up to date on all the modules carried forward from FX Collection and from the 3 Modulation FX collection. Then read on.

New Mix Bus
The mix bus unit is the Bus FORCE Parallel Processor, and it’s quite a processor. It is extremely flexible and useful on individual tracks and buses, as well as on a stereo master. The filter section includes low pass and high pass resonant filters based on the Oberheim SEM filters. The equalizer section is inspired by the legendary Pultec® EQ, a design still admired for its sonic characteristics and used on literally thousands of recordings made over the past 60 years. The compressor module is a VCA design, a design often employed for its transparency, predictability and repeatability (think Urei 1176). The Arturia model here includes side-chain source detection and a unique FORCE control that actually sets the ratio from 1:1 up to “infinity and beyond”. By that I mean the ratio can be forced to actually go beyond a flat limiter mode and actually progressively decrease the gain as the signal level increases above the threshold – this can really “pump” your music! The saturation section has four types of saturation: Even harmonics, Odd harmonics, “Thick”, and Overdrive. As you’d expect, Even tends to produce higher levels of even harmonics, but not only even harmonics. Odd does the same with odd harmonics being favored, but there are always both even and odd harmonics. Thick creates stronger odd and even harmonics that vary in complex ways with level, while Overdrive really pushes up the harmonic levels with higher odd than even levels. Note that I found no aliasing with any of these saturation modes.

But the most unusual aspect of this processor is its flexible parallel processing. Not just a wet-dry knob as many compressors provide, but a set of three paths, each with separate level control and the ability to route the modules in various series/parallel configurations. In fact, there are 36 possible routing combinations! This can provide an almost infinite range of dynamics and coloration to a signal. Another feature I found very handy: there is both an input trim and output trim, each with a generous +/-24 dB range. And there is a link button in the upper right of the front panel that makes the output level operate “counter” to any changes of the input level control to provide correction for loudness bias. I wish all audio processors with saturation characteristics had such controls – sometimes to get enough saturation effects on a track I need to add an extra processor, or use a clip gain boost, which messes up the mix balance. 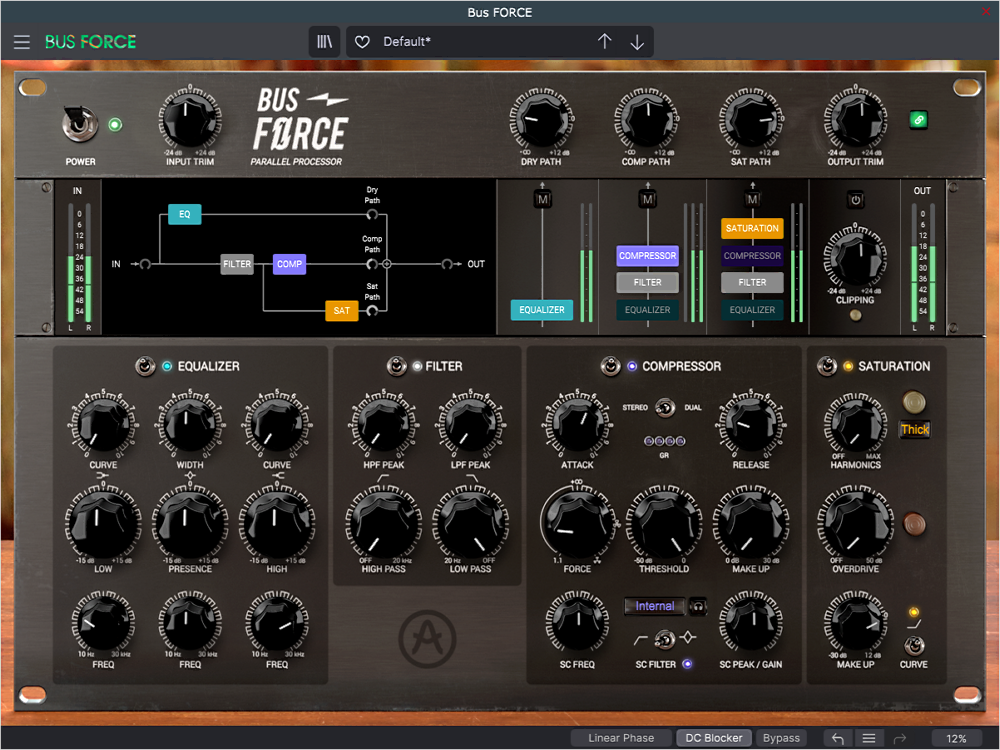 While this flexibility is excellent, it’s the final audio effects that matter and I got superb results on all kinds of audio sources. Definitely a great new Arturia creation.

Compressing with Diodes
Although the earliest use of diodes in compressors goes back to the Telefunken U13 used by German broadcasters in the ‘40’s, the most famous application is from Neve in Great Britain. The Neve design was the first diode compressor using solid state diodes (the Telefunken used tube rectifiers!) and Comp DIODE-609 is based on the legendary Neve® 33609 Diode Compressor and Limiter. If you want a real one, AMS Neve still make the hardware version, just south of $4,000 (US price). This is a colorful unit harmonically speaking, not a squeaky clean compressor like a Urei 1176.

An Advanced Control Panel (lower section) is available, adding excellent enhancements, as with many of the Arturia emulations.

The Arturia Advanced Control panel is here with some controls the real Neve doesn’t have, such as mid-side processing, built-in side-chain EQ controls, look-ahead control, and an input drive control that changes harmonic saturation level and characteristics over a wide range -- I measured THD increasing two orders of magnitude over the full input drive range, from extremely low (~0.01%) to a couple percent.

Back to the ‘70’s
What’s a broadcast EQ doing in your studio? Very well if you want some classic, very musical equalizer effects based on an elusive transistor broadcast console. COMP DIODE-609 is based on the Siemens™ Sitral console modules, combining three of them in one processor. These EQs are not “clean”, but were known for their warm, characterful sound. The originals used stepped controls (actually multi-position switches to change settings in rather big steps) – this recreation provides both stepped parameters and continuous control if you prefer. And of course Arturia have added features such as a spectrum analyzer (would have been unheard of in the ‘70’s), and Mid-Sides processing. 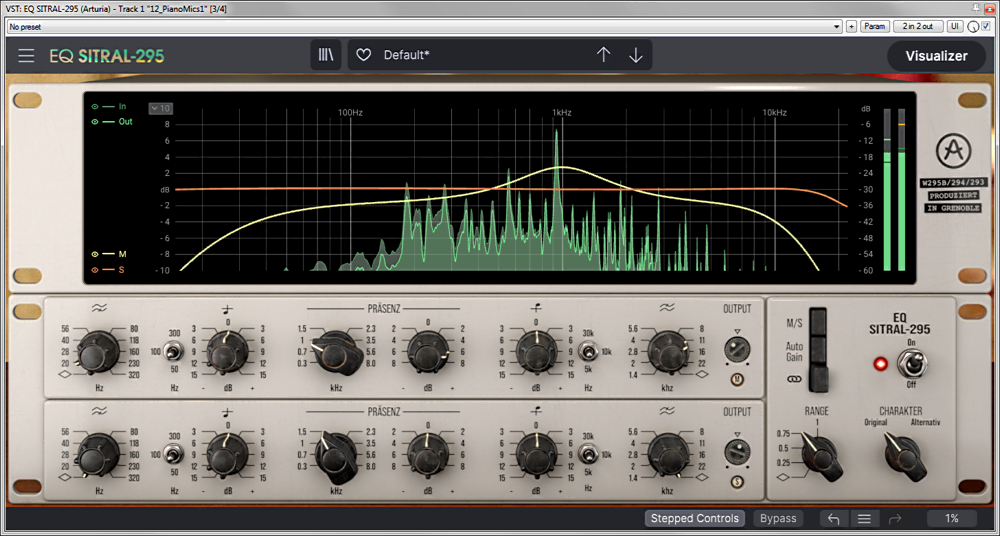 The classic Siemens™ Sitral panel at the bottom with the optional filter curves and spectral display above.

Juno for Chorus
In addition to adding the 3 Modulation FX You'll Actually Use to FX2, Arturia have introduced a new modulation processor based on the Roland Juno 6 chorus effect. The original design was very simple, but could provide lush, wide chorus effects. It had only three modes, mode I, mode II, and mode I+II. Arturia have added a fourth “manual mode” along with variable rate, depth and phase controls. And rate can be free-running or synced to your DAW tempo. This extra mode makes the Juno chorus much more flexible, yet still based on the wonderful “antiquated” BBD (bucket-brigade device) design. 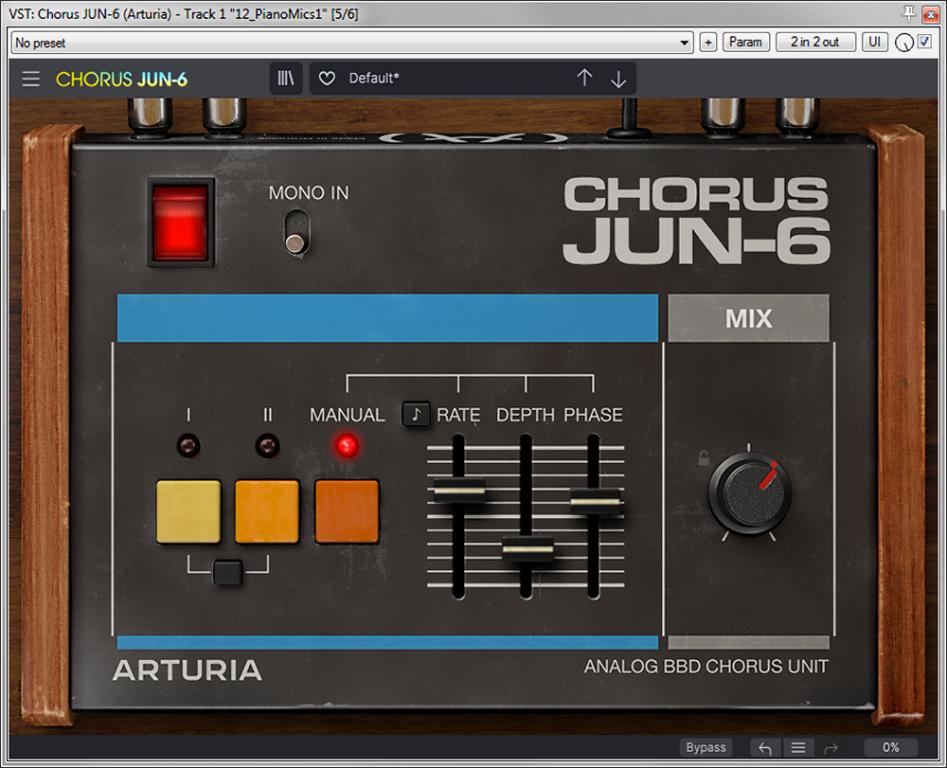 The Arturia model adds a flexible fourth chorus mode to the original.

Simple but very effective – back in the day we wished we had better chorus effects than a BBD could provide. Now we know we were wrong!

New Old Delay
The Roland RE-201 Space Echo Tape Delay/Reverb is famous, and thirty year-old used hardware units are still available in the $2,000 (US) range. The Arturia Delay TAPE-201 was on hand in the original FX Collection, but has been updated for FX2 with a choice of input processing: no preamp, the original RE-201 preamp, and a newly-modeled Germanium transistor preamp. This selection is just to the right of the Input Drive knob and my tests find that "no preamp" is clean as expected, the original 201 preamp promotes more odd harmonics than even, while the new model has a relatively high second harmonic and much lower third-harmonic and above. 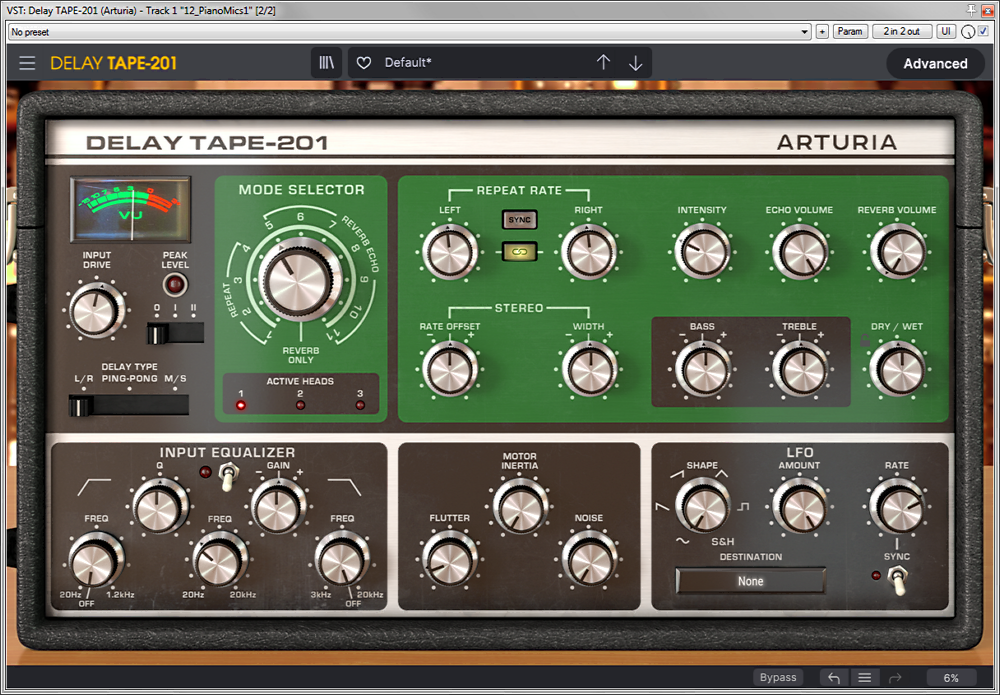 The new Delay TAPE-201adds a preamp selection switch below the peak level indicator.

The original 201 was very popular with guitarists and B3 players, and was a mono unit, but the Delay TAPE-201 can provide mono, stereo or mid-side processing with different delays on left-right or mid-side. In addition Delay TAPE-201 adds EQ, tape and mechanical FX (flutter, noise, and motor inertia) and an LFO to control any parameter within the plug-in, enabling some fabulous modulation FX. See the FX Collection review linked in the first paragraph for more details.

Technical
I tested these emulations using a PC Audio Labs Rok Box with Intel Core i7-4770K CPU @ 3.5 GHz, 16 MB RAM running 64 bit Windows. CPU usage varied from model to model, but is low for most units. Bus Force is, not surprisingly, the highest user of processor power at 1% to 2% total CPU depending on which sections are used, and 104 sample latency (at 48 kHz sample rate). The Comp DIODE-609 ran about 0.25% CPU use on my system with latency at either 32 samples or 272 samples when the “look-ahead” feature was turned on. EQ SITRAL-295 ran at about 0.1% CPU load and 48 samples of latency, while CHORUS JUN-6 ran at about the same CPU level and 32 samples of latency.

All in all, pretty low demands other than Bus Force (and the Rev SPRING-636 reverb reviewed in the original FX Collection review), but I wouldn’t expect to need more than one Bus Force in a project, and even with my rather old system I could use several. Available from the excellent Arturia Software Center in all the usual formats, 64-bit OS only with both VST 2.4 and VST 3, AAX and Audio Unit.

The Arturia Software Center is the best user-focused software delivery system I’ve ever used – always a pleasure to plug in my LAN line (only do so when I must put the studio online and at risk for all the usual crap on the Internet), click the ASC icon and in a few seconds, without even needing my password when using the studio system, it knows who I am, tells me what’s new relative to what is currently on my system, and will both download and install anything new or needing an update, all by itself. My compliments to Arturia!

Conclusion
Once again Arturia have put together an excellent set of very useful audio processors covering pretty much every type of signal modification you need. And at a “ridiculously” low cost per unit, especially during the intro price (until June 25, 2021). Highly recommended.

Pro:
An amazing set of studio gear, based on the sounds of classic gear that few of us could ever afford.

Excellent sound quality and comprehensive enhancements to the features of the original classic hardware.

Arturia have added 200 new presets and enhanced the “in-app” tutorials available with each processor.

Great value for money in this collection, even if you already own some of the included gear – Arturia have developed a 46-entry pricing matrix to cover all situations! I can’t claim to have tried all possibilities of this, but if you already have some of the processors included in FX2, it will save you money. Especially before June 25 this year.

Cons:
None that I could imagine!