SampleTron 2 is a fine emulation of several tape and early digital keyboards.

Even if you’re barely out of your short pants you no doubt have heard Strawberry Fields Forever and it’s iconic Mellotron flute part. The Mellotron is beloved for it’s unique sound, which compared to today’s 24-bit, 48 kHz sampler technology, was crap. But just as many people love distortion in the right context, the Mellotron sound is the right sound for some genres. It certainly found good use with bands in the 60’s and 70’s – King Crimson, Led Zeppelin, Tangerine Dream, even the Rolling Stones and the Bee Gees, in addition to the Beatles. 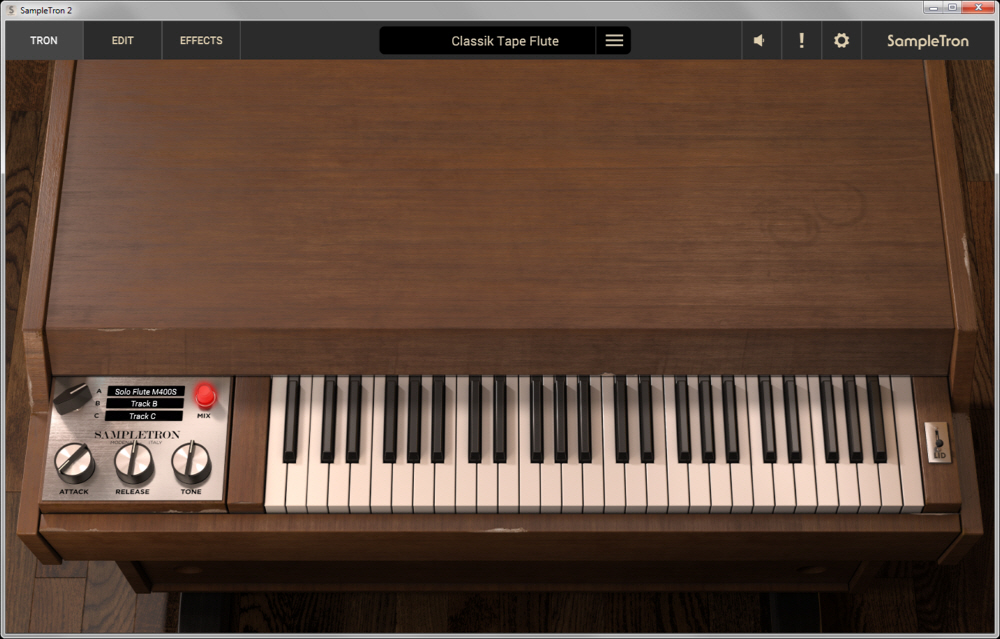 What Is It?
SampleTron 2 is a software emulation of tape and early digital playback keyboards, but not just Mellotron models. In addition to the Mellotron M300, M400, M400S and Mk II, it includes sounds from the original tape-based keyboard, the Chamberlin M1, a Mattel Optigan and it’s professional spin-off, the Vako Orchestron, a 360 Systems Digital Keyboard (the world's first synthesizer to feature sampled sounds on IC chips!) and a rather rare Roland VP-330 analog vocoder. It includes copies of many original factory sounds and over 100 new sounds (over 400 sound tracks in all). All of these can be processed with some excellent FX, tape defect processes and amp processors to add color and, if desired, add audio degradation to any sample. It also enables you to add your own sounds and process them with these processors.

If you are not familiar with the technology of these early machines, particularly the tape-based players, they were fascinating beasts. The Mellotron 400, for example, used tape strips for each keyboard key, with each tape including three instrument tracks, such as a flute on one track, strings on another and brass on the third. There was a read head for each key, and when you pressed a key, you actually pressed a roller against the tape to start it moving past the read head! The strips played for about 8 seconds maximum at a time, and when a key was released, the strip was pulled back to the start by a spring mechanism. The three tracks on each tape strip were 1/8” wide and there was an “A/B/C” selector switch on the front panel that physically moved the playback heads side-to-side to align with a given sound! Moving this control halfway between two tracks “kind of” played both of the sounds together! And even the M 400, the lightweight model, weighed over 120 pounds (over 54 kg). You can understand why these instruments were not loved by roadies and instrument technicians! 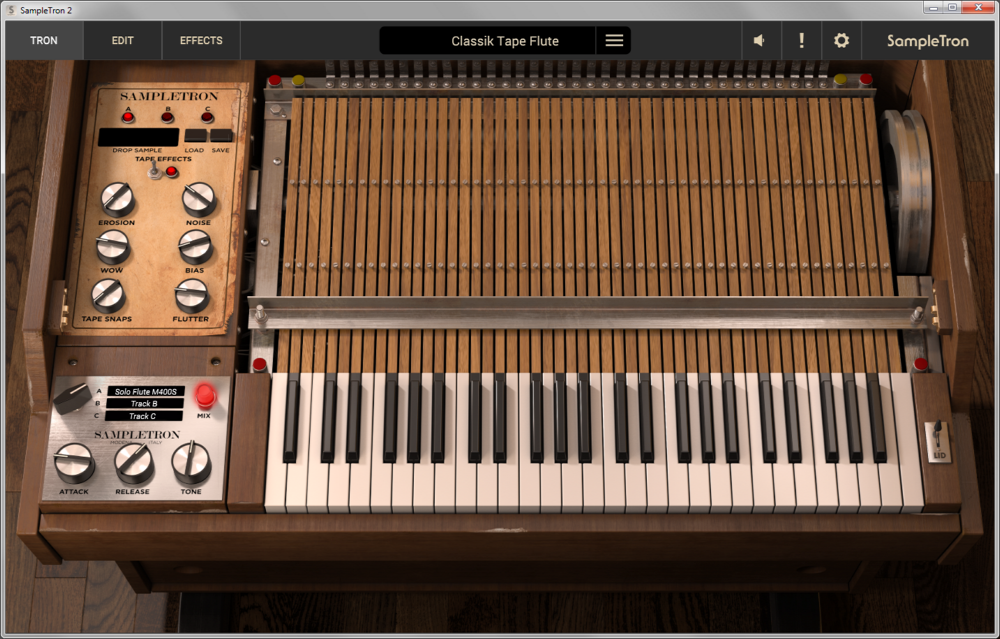 Tron open to show tape emulation settings on the left

Tapes wear out when played over and over, both mechanically and magnetically, so the sounds, which were not always the highest fidelity to start with, degraded over time, and not in the same way across all the keys! In addition, like any tape machine the playback was subject to wow & flutter, and in the case of mechanically moving tape by keyboard pressure, wow & flutter, and even momentary tape “slippage” could occur in severe ways. Such variation in the sounds is part of their charm! SampleTron 2 (SampleTron) lets you control a number of these effects, even when using “clean” samples, including wow & flutter, tape “snaps”, tape wear level, and noise level.

SampleTron provides three tracks like the Mellotrons, but any one, two or all three these may be played at once, with volume adjusted and panned separately. And each of the A/B/C tracks may be freely loaded with any of the included sounds, and as mentioned, with sounds you load. The Preset system includes 101 factory examples and you can make you own – presets load all three tracks and all other parameters like the tape conditions and all settings of the Edit and FX panels (described next). Note that changing instrument sounds in a real Mellotron requires removing a large tape frame and installing a different one! Not something you could do during a live gig! Changing SampleTron sounds takes from less than a second to a few seconds depending on the complexity of the preset.

FX Anyone?
SampleTron has an Edit tab where you can select the sound for each of the A, B and C track positions and process the sounds in various ways, such as setting volume, pan, transposing notes, fine tuning, and setting note and velocity range for each track (which enables creating keyboard splits and layering). There is also a panel with a filter and synth-like amplitude envelope control that can be applied to individual tracks or to all three tracks at once. This enables some nice evolving sounds. 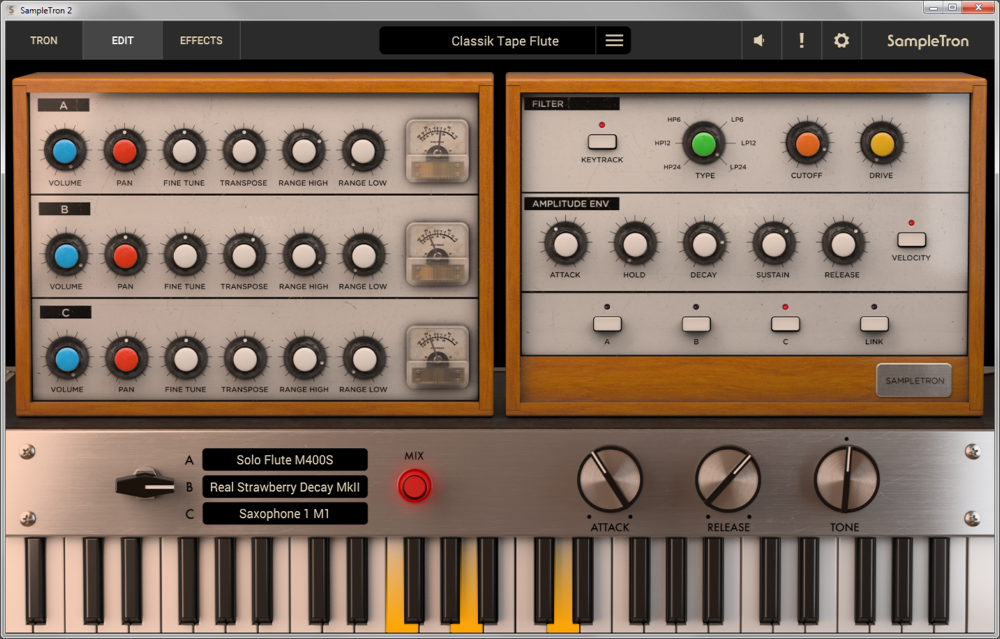 The Edit panel provides very flexible control of each track.

There is an Effects tab that opens a 4-slot FX rack. This has a channel strip with EQ and compressor, a vintage stereo tape delay, a multi-modulation unit with six different classic modulation effects like flanger, chorus, phaser and rotary FX, and a vintage plate reverb. Note that the order of these FX is fixed, although each can be used or bypassed. I actually found this refreshing since many FX racks I have, including some from IK Multimedia, enable infinite permutations of FX units which can take you down a long path of messing around with too many possibilities! These FX are all excellent and certainly do the job for any of the keyboard emulations. Note these FX are global, processing the final output after mixing tracks and applying any tape and amp effects, and they are saved with any Preset. 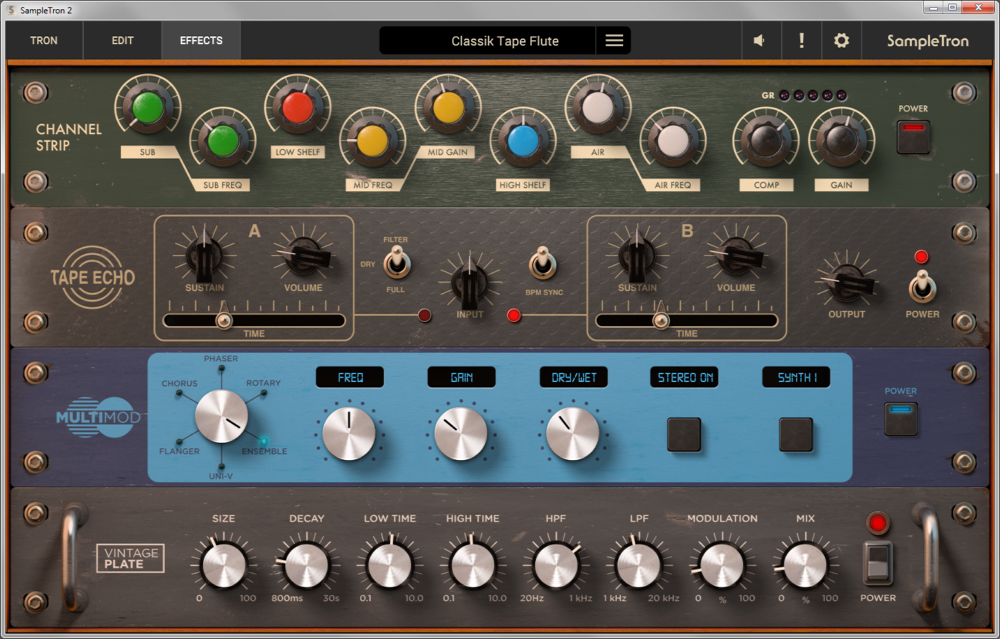 Missing in Action
There are a few functions I found lacking – in standalone mode there is currently no MIDI learn function and no no assignable MIDI controllers like volume control. A query to IKM indicates they plan to add this in an update. On the other hand, in a DAW you can control any of over 60 parameters using the DAW’s MIDI automation so in a live performance you could, if you dare, play SampleTron through your DAW. Actually, I found using my MIDI controller pedal on the master volume is not ideal since that controls the final output, post FX, so that reverb and delays are also affected by volume – I set up MIDI CC 11 to control the three Amp volume levels in the Edit window which enabled reverb tails to continue when I muted the SampleTron sounds. Of course using SampleTron in a DAW project you can automate many parameters leading to extreme sound variations.

Another issue I had was with trying to use my own sounds – the user manual is a bit sketchy and it took some fiddling to get a sound to play. And I realized that if I assigned a sound file to a key, say to C3, then C3 would play that sound. But no other keys would play anything. You can load a folder of sound files, one file for each semitone, in order to map as many octaves as you want, but this is a rather tedious operation! You need to create all the sound files first, store them to a folder in the right order (and/or with specific file names), and then load this folder. I have other sample players that automatically stretch/compress frequencies using Elastique to cover multiple octaves from a single sample input, but this isn’t found here. Of course using Elastique does not create the note imperfections of a real tape player, and keeping in mind that such keyboards as the Mellotron used different tapes for each key with different samples on each, SampleTron’s approach is more “realistic”. Still, I’d like to see an Elastique option!

And of course the Roland VP-330 analog vocoder sounds are “fixed” since there is no way to input a modulator signal (usually the human voice) – for a real vocoder effect you need separate carrier and modulator signals to get that good old robotic effect.

The new user manual had some issues, being a bit sketchy in a number of places while at the same time repeating the same information (even the same text) in a couple locations. Hopefully this will be cleaned up by the time you read this. However, for the most part I didn’t need the manual to figure out how to load presets and sound files, or to use the various Edit and FX controls.

How Does It Sound?
As always, IKM have delivered some excellent sounds and great flexibility. Of course some of the included “factory sounds” are of moderate fidelity, but that’s the reality of sampled sound technology in the 50’s, 60’s and 70’s. Sounds from the later models are better than the earliest sounds, and as mentioned before, there are over 100 new, hi-fidelity sounds included (though you can “trash” them as much as you wish!). My main problem evaluating SampleTron was finding that hours had passed by before I knew it, as I pulled up all kinds of instrument and FX combinations and got lost in the sounds! Truly a fun and flexible sound machine.

I used REAPER and Studio One for testing in a PC Audio Labs Rok Box PC (Windows 7 64 Bit, 4-Core Intel i7-4770K, 3.5 GHz, and 16 GB RAM) and it worked without a hitch. One instance of SampleTron in a project uses about 1.5 GB of RAM – that’s not a typo. It’s big. I found total CPU load varied from under 1% when idle to peaks as high as 10% - 15% when playing the most complex instrument combinations, and in the 5% range for many presets. So SampleTron is not a lightweight!

Conclusions
SampleTron 2 is a different approach to the Mellotron era of sample players than I had previously seen, with some innovative functions (tape snap, bias and erosion) and excellent sound processing capability. And it includes some wonderful historic sample player sounds. It can deliver anything from clean sounds with beautiful FX to extremely mangled sounds, and it covers a range of instruments beyond the Mellotron including some very rare devices like the Mattel Optigan, the Novatron and the Vako Orchestron. While missing a few possible tricks, it delivers an excellent range of sounds and is another great emulation of classic gear from IK Multimedia.

Pros
Some great historic sounds from the Chamberlin, Mellotrons, Mattel Optigan and the 360 Systems Digital Keyboard.

Runs as a standalone instrument as well as a plug-in.

You can control any of over 60 parameters using MIDI automation.

Supports all sample rates up to 192 kHz.

Cons
It’s a large program and uses considerable CPU processing which may be an issue if you are using a very old computer, but runs fine on my six year old PC.

There are currently no assignable MIDI controllers in the standalone version, and you can’t control volume level with a pedal or set up any controls for a keyboard controller. However IKM have indicated this is planned for an update.

Using your own sound files is a bit laborious, but the option is there for the perfectionist who wants to create new “classic” tape samples.

Last edited by Sound-Guy; 2 weeks ago at 04:55 PM..
Review this product Get the facts