Comprexxor for T-RackS 5 by IK Multimedia

I’m not hurting for compressors, and as many readers no doubt have, I have dozens, including a couple hardware units and piles of software emulations. In fact, T-RackS already had over a dozen models, but every compressor model brings something different to the table. The Comprexxor, just added to the latest T-TackS 5 update, is unusual in that it’s a software emulation of a hardware compressor introduced in the late 90’s, a unit that itself emulated the classic compressor sounds of the 50's to 70's! So it’s an emulation of an emulation! And it adds a number of very fine features to the original design. Definitely worth a look and listen.

What Is It?
The Comprexxor is a software emulation of a monophonic hardware compressor/saturator, enhanced to process stereo and mid-sides signals, with ganged or separate controls. Whereas the original hardware was packaged in a full rack width 1U-high box, the Comprexxor, as you can see, is 2 U-high! All kidding aside, the format is very clean and convenient for on-screen use, and includes all the original features with enhanced functions and additional capability.

The Comprexxor is based on a VCA soft-knee design that had a few twists, including tube and tape distortion emulations (via 2nd and 3rd harmonic distortion). Like the original, there is no threshold control – the Comprexxor unit has a “fixed” internal threshold level and an input gain control, and driving the input harder and/or turning up the input gain increases the amount the amount of compression which is applied. I found the threshold varies with the Ratio, Attack and Release settings, but generally in the -18 dBFS to -25 dBFS range.

A 16-LED gain-reduction meter at the top shows how much the signal peaks are being reduced, and in addition to Attack, Release and Output level, there is an Optical button. The function of the first three of these should be obvious, but Optical sets the Attack, Release and Ratio values to a preset level (ratio to 10:1, the attack to 10 and the release to 0) which is intended to be a starting point for an optical-style response. You can still vary these three parameters but if attack is set below 4 or release above 2, the Optical light goes out since the response is no longer in an optical compressor range. BTW, I found Attack times ranged from under a 100 microseconds to about 50 milliseconds in most modes. Release times ran from about 50 msec to several seconds in normal modes, and from very fast (about 1 msec) to about 500 msec in the GB mode (see below). There are many interactions with different ratios and other settings and I may have missed the results of some combinations, but in short, there are a lot of possibilities for dynamic control!

The ratios are switched by a Ratio button (or directly by clicking a Ratio “LED”), with seven ratios from 1:1 to 20:1 and Max – a brick-wall limiter mode. The reason for including a 1:1 setting is so you can still use the distortion facilities if you don't need compression. And each ratio has its own unique “color” – in the original hardware unit there are actually several different circuits used for different ratios. 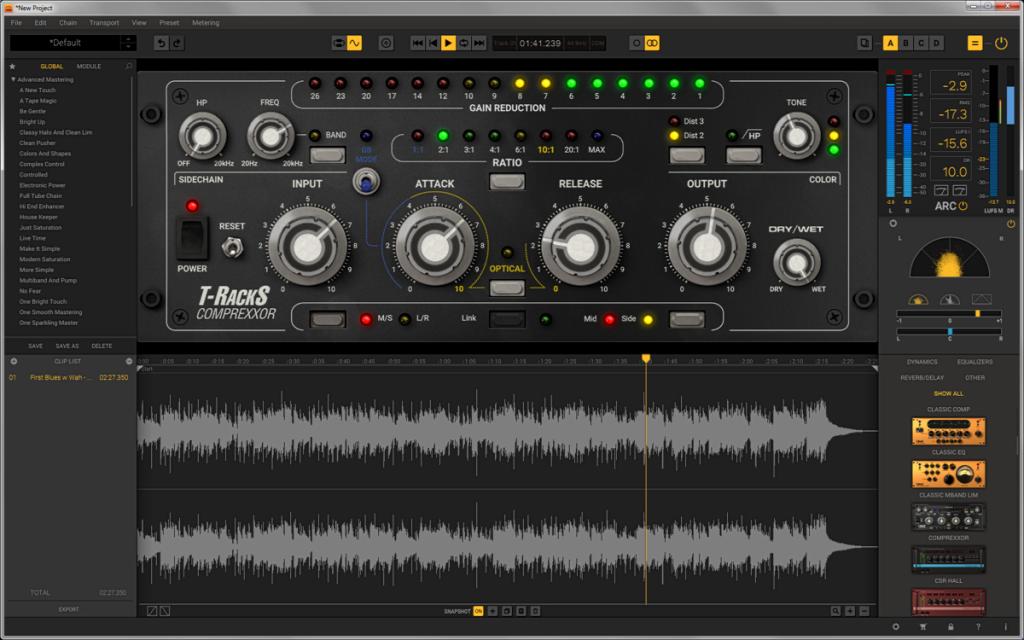 There is also a unique GB mode which acts like the ALL-IN mode of an 1176 compressor. This mode switches the Ratio to 1:1 and Attack to 0, which like the Optical feature is a starting point for using this mode – but even with the 1:1 ratio setting, the GB mode actually provides a very high ratio. The Ratio settings, Attack, and Release controls have complex effects on the resulting threshold and ratios in the GB mode – best to use your ears when tweaking in this mode.

Distortion Anyone?
There are a variety of harmonic distortion characteristics available using the DIST 2/3 button and the TONE control. Actually, even with DIST 2/3 turned off there are harmonics that vary with input level, from very low (0.001% at inputs -20 dBFS or lower with the INPUT dial at 5) to over 10% with high input levels (+20 dBFS). At an input level of 0 dBFS and the INPUT dial at 5, I found THD was a low 0.01% with DIST 2/3 set to Off, and increased to about 12% with DIST 2 on and about 10% with DIST 3 on. While the DIST 2/3 control enables more emphasis of the 2nd and the 3rd harmonics respectively, there are always some level of each type, as well as higher even and odd harmonics. There is also a unique bipolar TONE control that adjusts the overall distortion level for each distortion mode. Turning it clockwise it will increase the harmonic levels, while counterclockwise it will decrease them. The original unit as no such control. I found the TONE control can vary distortion components by about 40 dB (100:1), which is “huge”. So there is a lot of adjustment possible for harmonic distortion, and I found results excellent on tracks like bass, drums and guitar, and on full mixes.

The Color meter shows how strong the harmonic emphasis is when DIST 2 or 3 is on. With a green “LED” coming on when there is a very low level (THD less than about 0.03%), yellow comes on when DIST 2 or 3 is approaching 0.1% THD, and red when THD is approaching 0.5%. If DIST 2/3 is off, I found the harmonic distortion is still very low even when the red “LED” lights up (about 0.01% THD), but you can push the level and/or the TONE control up way past “red” to still get considerable distortion as indicated earlier. Distortion is always “analog” with no digital clipping or other artifacts. 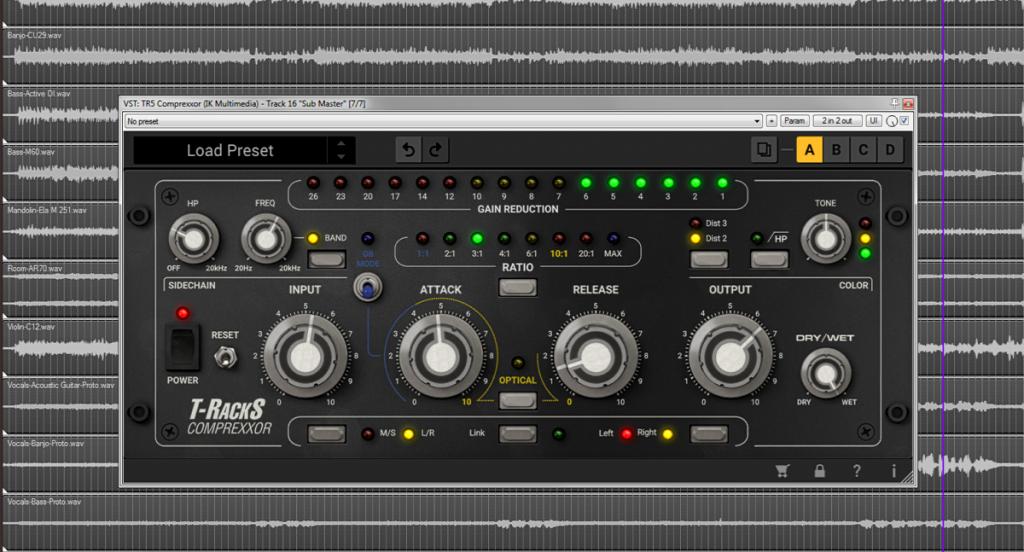 There are also the usual IK Multimedia features like Presets and A/B/C/D quick comparisons, wet/dry control, and the ability to set the parameters separately for left and right, or mid and side channels, which is especially useful in mid-side mode. And of course the Comprexxor is part of T-RackS 5, operating both within the T-RackS standalone module for mastering duties, and available as a plug-in for your DAW.

How Does It Sound?
In short, excellent! Although I don’t have the original inspiration for the Comprexxor, I would hazard a guess that this is an excellent emulation of that beast, and of course is much more, being fully stereo/mid-sides capable with several significant added features to the original. It also costs a lot less than a new or used one, and doesn’t have noisy pots and switches of a 25 year old rack unit!

Tech Data
Available in 64-bit AAX, AU, VST 2, and VST 3 plug-in formats, for MacOS 10.9 or later and Windows 7, Windows 8 or Windows 10. Note Windows requires an ASIO compatible sound card. I used REAPER and Studio One for testing in a PC Audio Labs Rok Box PC (Windows 7 64 Bit, 4-Core Intel i7-4770K, 3.5 GHz, and 16 GB RAM). The first instance of Comprexxor in a project uses about 115 MB of RAM; but additional Comprexxors use about half as much per instance. To estimate CPU load I used REAPER’s Performance Meter and found the load for once instance varied from just under 1% to just over 1% – so call it 1%! And I measured latency at a constant 73 samples, 1.5 msec at a 48 kHz sample rate.

Conclusions
Not just another compressor, the Comprexxor can provide excellent results on many types of tracks and mixes. It can yield mild to extreme dynamic control as well as adding mild to extreme harmonic distortion, and all very ‘musical’. It greatly expands what the original unit can do and not only looks fine, but sounds excellent. Another great emulation of classic gear from IK Multimedia.

Excellent audio quality with both dynamics and saturation processing.

Stereo and Mid-Side processing with ganged or separate L/R-M/S controls.

Extra range of control for harmonic distortion with the Tone knob.

Includes an “ALL-IN” mode of an 1176 compressor and the characteristics of an optical compressor.

Runs in the standalone T-RackS 5 mixing and mastering workstation as well as in plug-in mode for a DAW.

Supports all sample rates up to 192 kHz.

Cons
I see and hear nothing to complain about!