...sounds like an expensive mic should: something special; something magical.

Intro: The BB29 is a large-diaphragm cardioid condenser mic, part of the Signature series from JZ Microphones. The BB29 is hand-built in Riga, Latvia.

Out the box: In terms of looks, in comparison to a range of mics, the BB29 doesn't stand out in any aesthetic way – it blends in. On closer inspection the muted shape and texture is of high-quality and constructed of solid materials and well-finished. The BB29 is high-quality in a discrete way. In the hand it feels good and easy to position and adjust in the elastic suspension.

There is little fuss or drama in the JZ Microphones BB29 and that ease-of-use extends to recording: generally a high-quality sound, full and rich, forgiving of positioning and needing little EQ/dynamics in the DAW session. The BB29 took quite a bit of treble EQ around 4kHz without breaking up; similarly it took bass boosts well too. EQ cuts don't cause phase issues.

The EQ and dynamics are just needed to position the BB29 in the mix rather than for correcting deficiencies or flaws in the tracking recording. 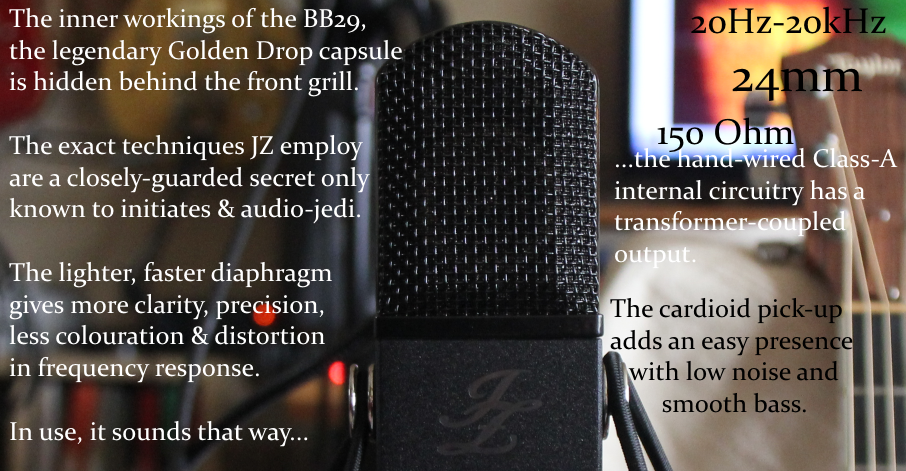 Although the BB29 is able to be EQ'd or compressed in a DAW post-recording this just highlights it's capability in simpler recording e.g. solo vocal and guitar; or a solo instrumental, for here everything is balanced wonderfully and there is literally no need to EQ or compress. It is a particular ambience that might not suit all styles or occasions but it is certainly classy, high-quality, and expensive-sounding. The old cliché 'sounds like a record' is fitting with the BB29.

The BB29 is clean and neutral too and more flexible, for a variety of roles, than the fixed-cardioid would suggest. Presence can be easily achieved (by making the source prominent to the mic) but equally sound 'set back' by distancing from the mic leading to natural results in the mix. 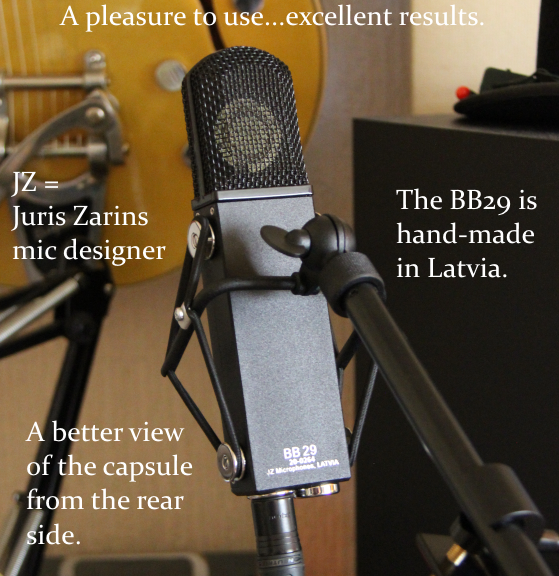 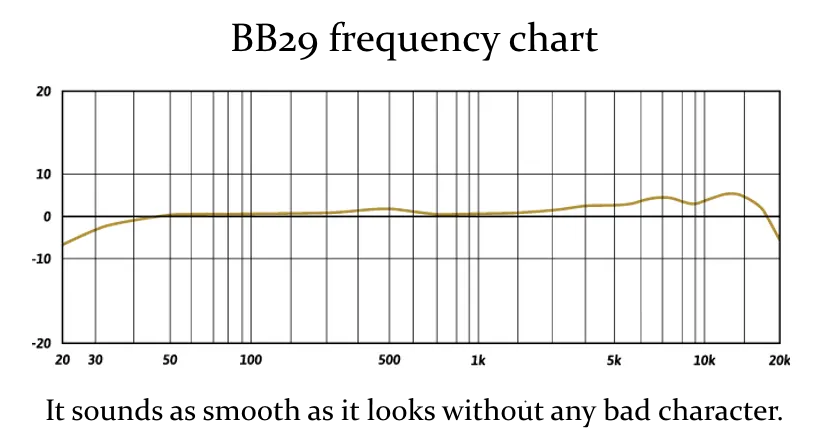 Like the mic, the custom accessories are high-quality, robust and do the job perfectly, and therefore reasonably-priced. The suspension is an elegant design and effective – I didn;t notice and rumble or tremors from foot-tapping. 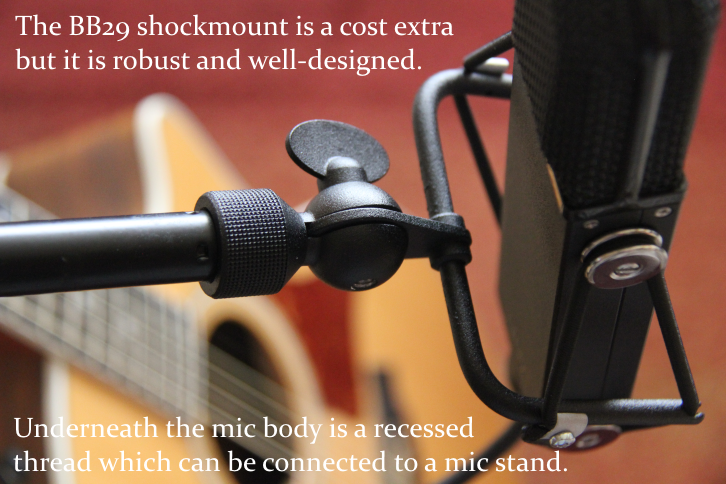 In Use: I tested the BB29 with BAE1073mpf, Cranborne Audio EC2, Sound Devices 702. Audient EVO4, and Focusrite Saffire PRO24DSP. The BB29 remained clear and detailed with the more coloured preamps/settings and non-harsh, warm, and colourful with cleaner preamps.

I liked using it on and with everything.

Using the BB29 inspired confidence during performance through the signal quality/clarity and its effect on the monitor mix, Good strong signal that positions the vocalist/performer to their own monitor soundstage.

I could hear that the BB29 had a flattering effect on my own vocal; it brought out favourable characteristics (which other mics missed) such as faint tremolo and nuance. I felt that I could be more adventurous in the next project and the capability of the BB29 expanded that horizon.

As an engineer recording other artists I imagine that the BB29 would be an easy choice: despite having some character (that might not suit every occasion) it would probably work in most cases rather than less. 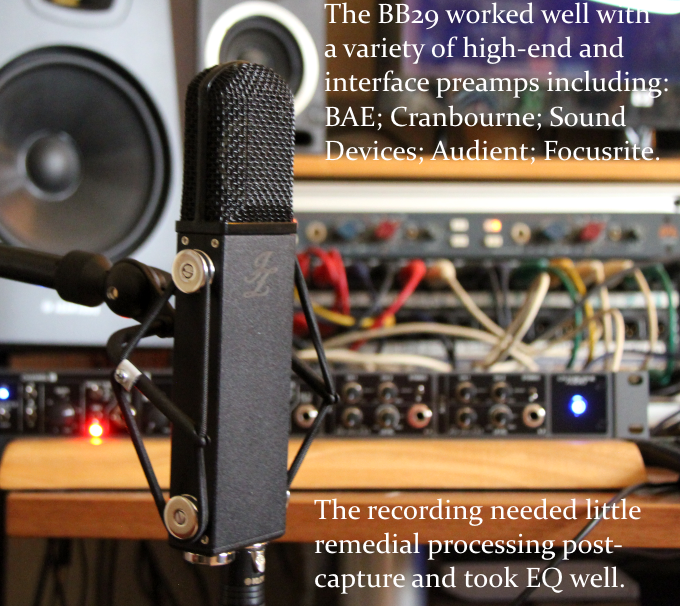 In the mix, having several sources recorded with the BB29 imparted some character into the soundstage - a bright, solid representation with a plate-like ambience (with similar treble to the Aston Microphones Spirit but in higher quality). Despite acoustic guitar, vocal and bass amp being mic'd and in the mix the separation was still good and a spacious 3-dimensional air was added between sources. In a sense this helped to keep the soundstage cohesive

In all, a very positive first experience with JZ Microphones and the BB29; always a pleasure to use and review such high-quality products. 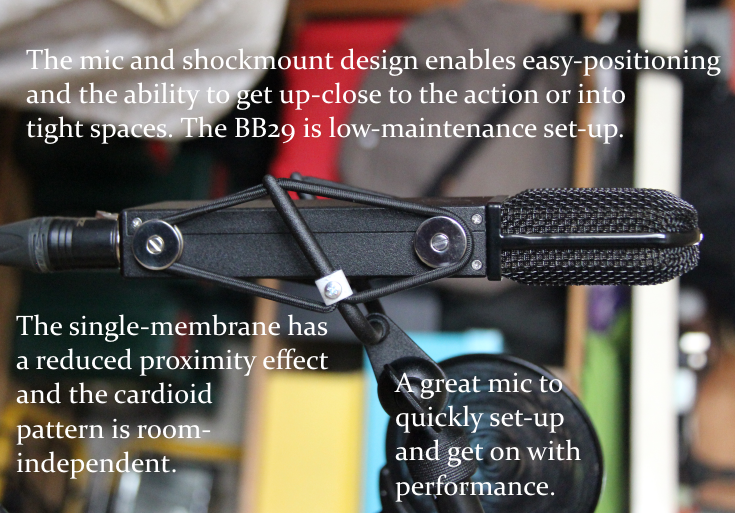 There are more audio examples available at the JZ Microphones website. 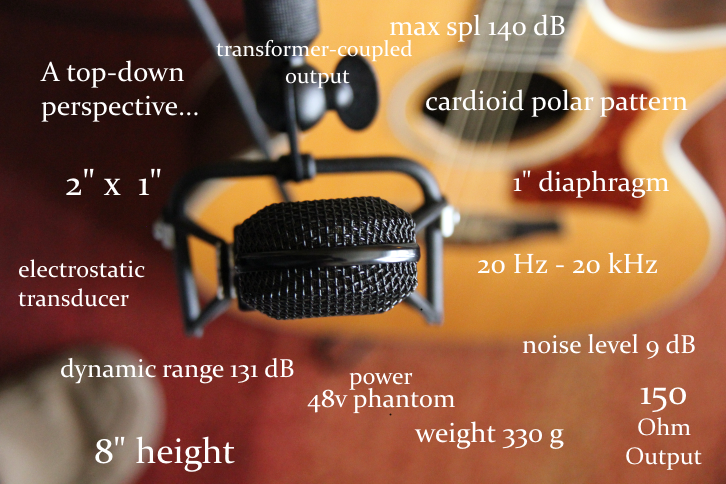 Conclusion: The BB29 is the kind of mic you'd want to get decent results on many sources with a minimum of fuss. Reliable sonically and in terms of workability. It sounds like an expensive mic should: something special; something magical. The kind of mic that leads to classic sounds effortlessly. 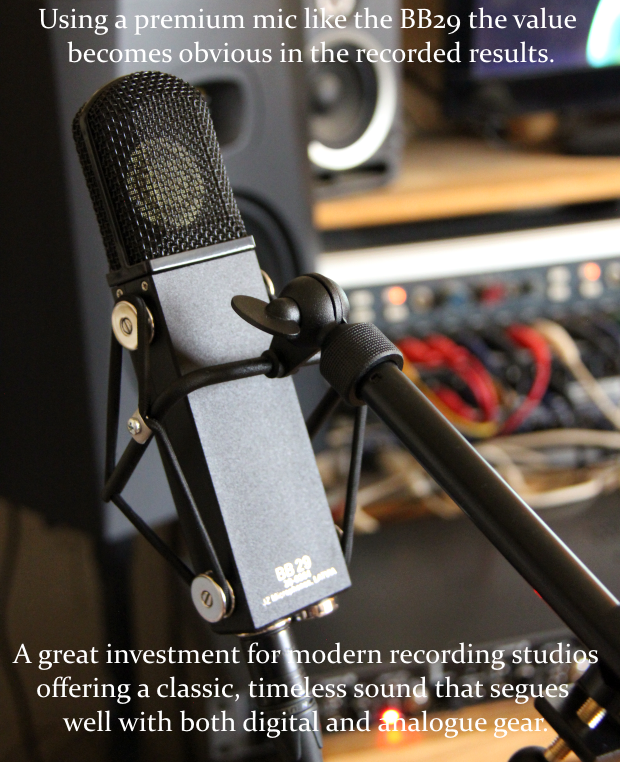 Gearslutz Points.
Sound quality: 5/5 Fittingly, for a hand-built microphone, the sound is epic. The talent is the limit. The BB29 offers perfection at source. Despite the increased high-frequency capture there is no harshness. A full, smoothly-controlled bass capture with a subtle proximity effect.
Features: 4/5 No features such as high-pass filter, or pad, or variable polar patterns. The BB29's microphone mount is not-included with the microphone and is a cost-extra and given the uniqueness of the suspension design it cannot be used with a regular mic holder. There is a recessed screw thread that enables the BB29 to be fixed on top of a mic stand.
Ease of use: 5/5 It would be difficult to get a bad result even with careless or sub-optimal positioning or mediocre connected gear (e.g. budget preamps). Easy to position. Works with many sources. Sounds good in the DAW session.
Bang-for-buck: 5/5 The BB29 sounds like a luxury workhorse mic and IMO well-worth the money given the possible results.
Last edited by Arthur Stone; 9th March 2021 at 10:10 PM..
Review this product Get the facts