A very comfortable chair with a different look.

Chairs may seem the least necessary gear in a studio until you consider how much time you sit (I assume you are tracking, mixing or mastering, not standing while shredding on your 1959 Gibson Les Paul). Chairs come in a wide range of styles and prices, with many at your local office supply running from $50 to $300. And many of these are reasonably comfortable for a short sit – but may not be friendly to your backside if you sit for hours at a time.

The “standard” in pro studios and many project studios has been the Herman Miller Aeron series, and I say series because they come in a range of options, with the basic model listing for $995, and by the time you add an adjustable lumbar support, adjustable armrests, and a tilting seat bottom (not the back rest which tilts even on the basic model) you are up to about $1245, which may be more than you paid for your computer or audio interface, and at least is more than you paid for your DAW.

I have used a number of office chairs in my studio over the years, and most were reasonably comfortable for half an hour or so, and got a bit annoying if I didn’t get up and walk around frequently. Actually, you should get up and about every once in a while, to stretch muscles of your body and to listen to playback in different areas around your studio, but even doing so, most chairs I’ve used also caused some “kinks” in my backside (by which I mean back of the legs all the way up to my shoulder blades and neck). My last usable chair cost $200 (on sale from $300) and was actually nice except after an hour or so I felt like I was sitting on a hot plate, and the backrest didn’t really support me, so I ended up leaning away from it, which didn’t help my lower back.

Enter the eChair from Carl Tatz Design (CTD) in in Nashville. The PhantomFocus eChair to be correct. If you don’t know of Carl, one might ask where have you been? Carl owned Recording Arts Studio for many years, a world-class music recording facility in Nashville that was named one of the "Great Studios Of the World" by Mix Magazine in 1995. Multiple gold and platinum records were produced there and Carl himself had a Grammy nomination in 1999, but he became very interested in studio acoustics and saw an opportunity to help improve rooms all over Nashville and all over the country. He sold his studio to Sheryl Crow in 2003, and as they say, the rest is history.

You can check out his site and see the range of products and services offered – if you are seriously working as a mix or mastering engineer and need a really fine space in which to work, CTD can design and modify or build about any size space you need. And using his proprietary PhantomFocus System monitor tuning protocol along with acoustic treatment and audio products like monitors and amps, will guarantee the resulting sound will be as near perfect as possible. CTD has many successful installations and multiple TEC Award nominations and a TEC win in 2015 for studio design.

In addition to audio gear such as monitors, CTD offers a range of chairs, actually two main styles each in several color combinations. They are not cheap, but quality never is and they are built very well and all offer adjustable seat height, “back” tilt, seat tilt, armrest height and swivel. I say “back” tilt in quotes since the eChair does not have a normal seat back, but only a lumbar back support which I find works very well. You can lock the back position or “float” it so it rubs your back a little if you lean forward and back. The seat bottom also tilts a little forward and back when you shift your weight which keeps you more evenly supported. The lumbar support and the seat bottom are both a mesh design, so they let your body breathe. I’ve found myself at midnight or 1 am surprised that it was so late (or early!) having let a couple hours slip by as I mixed music or tested audio products.

As for not cheap, they are basically half the cost of an Aeron. So they are certainly not overpriced for the features and comfort they provide. There are two basic models, the eChair ($569) and the Master Engineer Series eChair ($719), as well as “large seat” models for $75 more. Since I can’t claim to be a mastering engineer I bought the normal eChair! My studio is very compact, so my optimal listening area is small – I like to stay within about a foot of the “sweet spot” and spent maybe half an hour to an hour spread over a week to “tune in” the height, tilt, lumbar setting, and position of my eChair. I don’t roll around on a chair due to my small room and the fact that, as Carl Tatz has stated, “There is only one position that can be accurate and that’s your position in front of the monitors”, and in a small room that “sweet spot” is small. After two months of nearly daily use, I’m very happy with the purchase. In fact, some times when I haven’t been working in the studio (it happens) I walk by the door, see the eChair, and walk in just to sit a few minutes!

Pros
Well designed with excellent build quality
Cost about half the “industry standard” chair
Comfortable for extended seating (but you should still takes breaks!)
Free shipping in the USA

Cons
More costly than a Home Office special! But your backside will thank you. 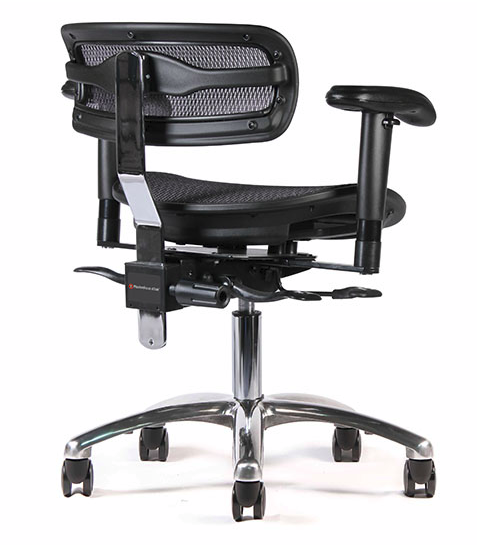 http://www.carltatzdesign.com
https://www.phantomfocus.com/product-p/echair-rc.htm
Last edited by Sound-Guy; 4th December 2020 at 12:01 AM..
Review this product Get the facts