Leapwing Audio creates plug-ins that don’t try to look analog or try to emulate what analog processing can accomplish. The RootOne processor is their latest product and is a new approach to creating sub-frequencies, an octave below the input signal. And it can also produce harmonic overtones above the input frequencies. Note this review is of the latest update, version 1.2, which is what you should be using. 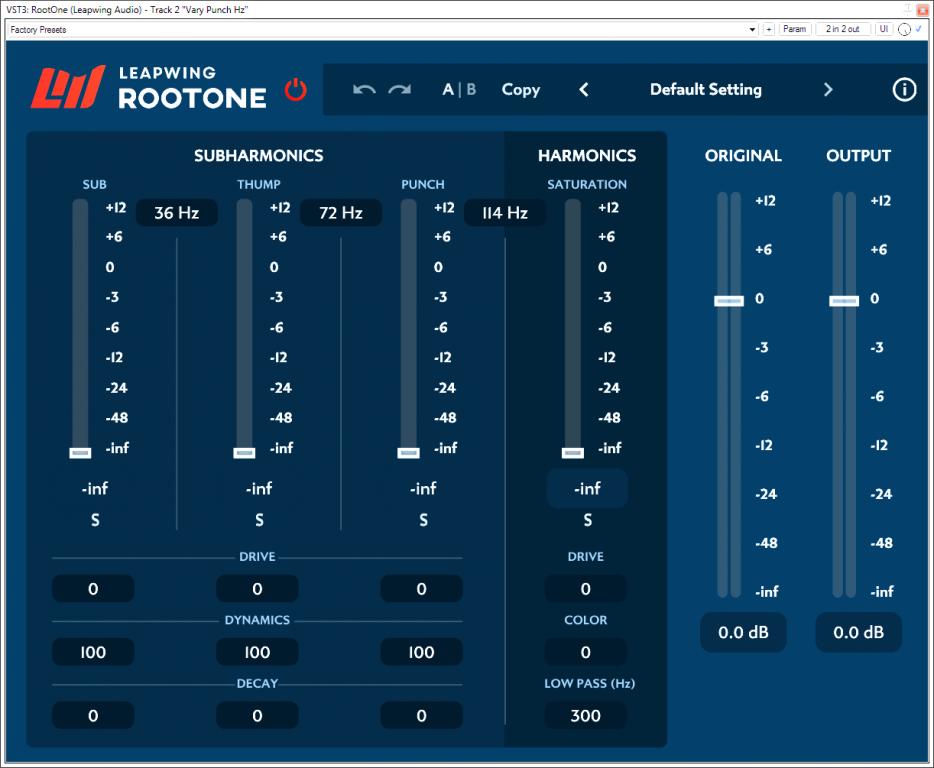 What is it?
RootOne is a sub-harmonic processor using a unique digital analysis process to create sub-frequencies, and unlike other “sub” generators I’ve tried, RootOne keeps the sub-harmonic in phase with the input signal. This prevents phase cancellation issues so that the sub-frequency is always supporting the input frequency rather than sometimes fighting it. RootOne apparently “looks” (“listens”?) for a signal in the input sound that is an octave above any frequency in its analysis range, and then supplies a clean sine wave tone to track the input at half the frequency. On the listening side of testing, RootOne certainly produces strong sub-frequencies that track the input very well. At times I found my sub was pumping out bass below 40 Hz that literally flapped my trouser legs

As you can see in the view of the GUI there are three bands of sub-harmonics called Sub, Thump and Punch. These names define three ranges of sub-frequencies generated from the input, and the ranges are adjustable using the window seen to the right of each band’s level meter (the defaults being 36 Hz, 72 Hz and 114 Hz) with the set frequency being the crossover frequency to the next higher band. For example, with the 36 Hz in the Sub band and 72 Hz in the Thump band, any generated sub-frequencies below 36 Hz are controlled by the Sub band and frequencies above 36 Hz are “passed on” to the Thump band. And frequencies generated between 36 Hz and 72 Hz are controlled by the Thump band, with frequencies above 72 Hz passed on to the Punch band. The level of any generated sub-frequency is controlled in each band by an associated fader so that you can tailor the result to your needs. BTW, each band will produce only a single sub-frequency tone – if there is more than one input tone within twice the band’s frequency range, it will lock on to the loudest frequency. However, all three bands can create their own sub-frequency tones at the same time within their own frequency range, but I can’t imagine ever needing sub-frequencies for piano or guitar chords! And it’s unlikely you’d have chords falling in the appropriate band ranges. The lowest tone that RootOne can generate is 10 Hz, lower than I’d ever need!

The Sub band upper corner frequency can be adjusted from 32-56 Hz, the Thump band from 62-104 Hz and the Punch band from 110-196 Hz (although my testing found the upper limit appears to be ~190 Hz which is no serious deal). In addition each of these three bands has three adjustments at the bottom of the control panel: Drive, Dynamics and Decay. These can be adjusted two ways, by click-dragging the number in the window or by clicking once in the window to display a horizontal control fader. Drive adjusts a send level, taken post fader, and sends it to the fourth “saturation” band described below. The Dynamics control adjusts the dynamic range of the new low frequencies in each band relative to the original signal. Decay is an envelope control enabling the sub-frequency to cut off rapidly or decay more slowly. Each band also has a Solo button to hear only the contribution of its frequency range. Soloing a band mutes not only the other bands, but also the original signal output. You can solo any number of bands at once and shift-clicking a solo button enables XOR selection causing all other solo buttons to reset. 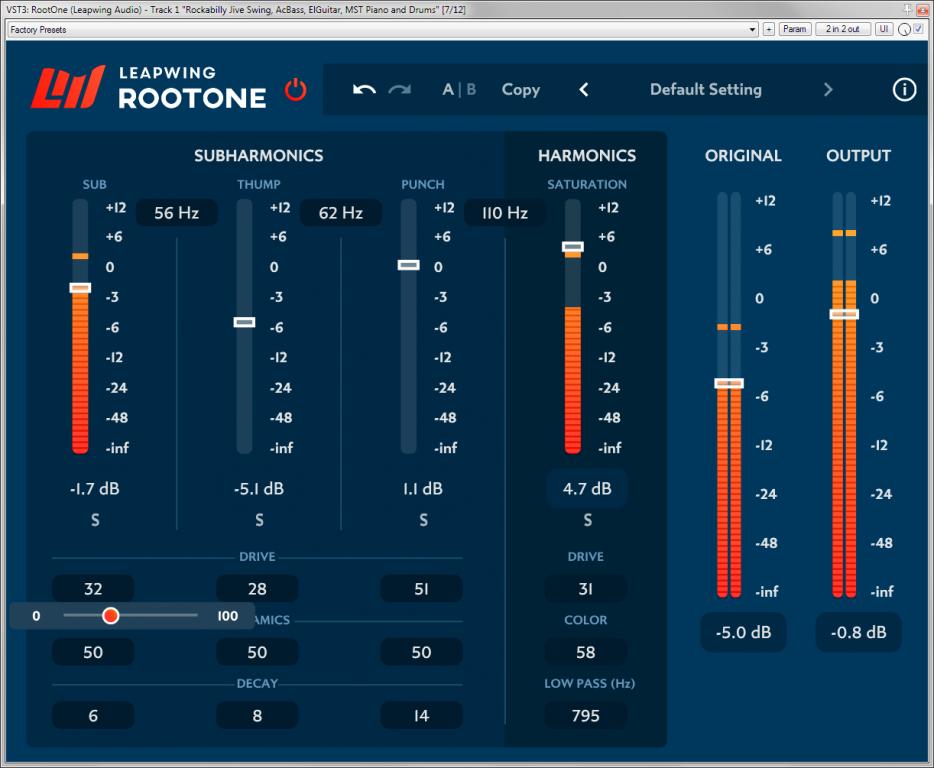 In addition to the Sub-harmonic bands there is the Harmonics (Saturation) band that can produce harmonic overtones rather than sub-frequencies. As mentioned, the Drive function for each sub-harmonic band feeds the saturation engine, but even with all Drive levels at zero, some signal is still processed through the saturation section. The input signal is also processed with this section. This band also has a Solo button and three controls, Drive, Color and Low Pass. Drive adjusts the level of overall harmonics while Color controls the character of them. Drive and Color interact to some extent, but low Color settings create higher odd harmonics compared to even harmonics and high Color settings create more even harmonics, especially the second harmonic. To add to the complexity of harmonics you can create, the signals you send from each sub-harmonic band create harmonics of those sub-frequencies. So if you have an 80 Hz input tone, you can get 160 Hz, 240 Hz, and 320 Hz from the fundamental, and also 120 Hz (3rd harmonic of 40 Hz) and 200 Hz (5th harmonic of 40 Hz) and so forth! Low Pass is a 12 dB/octave low pass filter on the output of the Harmonics band, handy to limit generated harmonics from overcrowding the mid-frequencies if needed.

On the right side there are two faders and meters, one for Original (input) sound and one for the Output which is the sum of the input signal (as set by the Original fader) and the contribution of the four processing bands. Overall there is a lot of control available and the combination of sub-tones and harmonic saturation can shape bass sounds in many ways.

All the faders and meters have a range from -oo to +12 dB with 0 dB calibrated to provide output level equal to input. There is no equal loudness bypass function, but as processing only affects bass through lower mid-range frequencies, I didn’t find that to be a concern. RootOne does have a “power” switch above the Sub-harmonics section that will switch all processing on and off while maintaining latency which is a rather large 4096 samples. That feature is useful since at 48 kHz this is 85 msec of delay. This is not a unit to use for a real-time performances, but I can’t imagine why anyone would want to create sub-frequencies while performing!

Nerdy Stuff
OK, what about this phase-coherency stuff? I used an oscilloscope to view waveforms in order to see if the sub-harmonic signal was truly “in phase” with the input signal and stable. It was, even when harmonics were added to the picture:

It turns out phase alignment wasn’t working right in the original release version, so if you are using a version before 1.2, please check out the Leapwing site for an update. The earlier version did produce sub-frequencies, but they were not always correctly phase aligned and though the results sounded OK for some of my testing, I figured something was off – trying to view waveforms as above resulted in constantly shifting shapes as the sub signal drifted in and out of phase.

Presets?
There are 14 factory presets in four categories, Bass, Drums, Melodic and Mix-Master, and you can create and save your own presets using the “Save as” option. And you can make your own subfolders in the preset folder that will show up in the dropdown menu as subcategories. There is also an A/B comparison switch to instantly compare two treatments.

RootOne also has Undo and Redo (with multiple levels) which I found very handy when trying different settings. And all of these features provide instant, glitch-free switching, so comparisons are not compromised by extraneous noises. 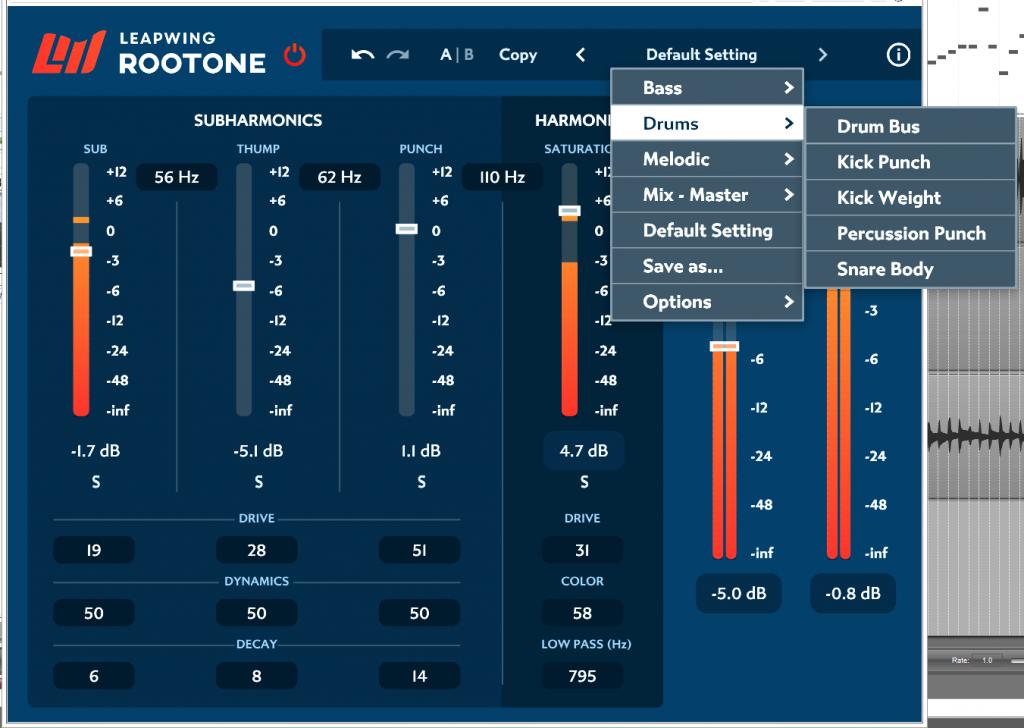 How Does It Sound?
I am really impressed. I was surprised to see a preset category for “Mix-Master” – I thought using RootOne on a mix might lead to serious confusion, but RootOne was able to find appropriate low frequencies and cleanly support them on several mixes I tried. As I mentioned, each band will create only a single tone, but sub-harmonics are really the realm of bass guitar, electronic bass lines and kick drums, which are monotonic. RootOne can find those monotonic bass sounds in a mix quite well. When I used RootOne on a rock song mix, I couldn’t tell (and didn’t care!) when/ if it was supporting the bass guitar or the kick drum – it all sounded good, fuller and deeper. And playing with the Harmonics section enabled significantly modifying the tonality of the lower few octaves.

One mix I tried just for fun was a restoration I’d done a few years back of a 1950’s era Christmas album, an early LP “Hi-Fi” record that was very weak in the bass, but trying to EQ the low end had just added rumble and background noises. I was amazed how well RootOne brought up a strong clean bass sound from what was probably an acoustic upright bass, and didn’t increase the general low end noise. Quite a surprise. And of course used on single tracks such as bass or kick, it can provide very clean results and enable a lot of tonal variation.

Who Needs It?
If you are creating dance music for clubs you will certainly want very low bass, and RootOne can produce frequencies down to 10 Hz. Even if you are creating “radio-ready” tracks for broadcast or streaming, RootOne can help produce tones that will cut through a mix and play better on limited bass systems. One word of caution: very low frequencies can eat up your headroom, so you need to watch your overall spectral balance. But RootOne can help where the low end needs a boost and when you need to adjust the spectral balance up to a few hundred Hertz without using overall EQ.

The Tech Details
RootOne has a lot going on under the hood, and thus is not light on CPU requirements. In my test system (PC Audio Labs Rok Box PC running Windows 7 with 4-Core Intel i7-4770K, 3.5 GHz, and 16 GB RAM) I found it used about 0.7% of my CPU resource at most (measured with REAPER’s Performance Meter) which is higher than most “common” plug-ins, but RootOne is not common! I expect few people would use more than one instance in a project, maybe a couple if they wanted to extend both bass guitar and kick drum tracks with different settings. As mentioned above, latency is a healthy 4096 samples and is constant even when the on/off bypass switch bypasses the processing, so this processor is intended for mixing and mastering.

Conclusions
Overall RootOne is very impressive, producing low end “welly” that really supports input tones, and is able to create a range of overtones that can shape a track or mix. It is not a cheap plug-in, but does what it does better than other subsonic plug-ins I already had (won’t likely be using them in the future!). There is a free demo available from Leapwing so you can try before you pull out your PayPal wallet.

RootOne has a Retina interface available for those who need it, and is supported for Mac OSX (10.9 +), Windows 8 and 10 (64-bit only) in AAX, VST, VST3 and AU. However, all my tests, using VST and VST3, were run on a Windows 7 machine with no observed issues. Leapwing can no longer officially support Windows 7 since it is "obsolete" but I have observed no issues with recent software releases I've tried running in '7' and if I do I just won't use that software!

Dynamics and Decay controls allow fine-tuning the sub-harmonic response in ways I’ve not seen before.

Cons
Moderately high cpu usage, but not more than other complex plug-ins.

Not cheap, but good quality and unique processing capability never are!