There is some great audio software from France these days and UVI in Paris have recently added another product to their arsenal, the Drum Replacer, a plug-in has already had some very positive reviews online. Drum replacement is a common technique in music production, whether it be to perfect “almost good” recordings, to replace drums outright, or to layer new sounds with the existing ones. For a thorough presentation of the Drum Replacer capabilities you can watch the 30 minute overview from UVI (see UVI video link below). There are a number of drum replacement plug-ins out there and I’ve used a gate at times to provide drum enhancement since many gates have the option of sending a MIDI note when the gate opens.

New Tricks
There are a couple unique features of DR. The most impressive to me is a built in spectral analysis function to increase detection accuracy. The other unique feature is the ability to host a VSTi sound module “inside” of the program. This hosting function, of course, doesn’t actually put a drum module into DR, but integrates some control and its output within DR. One problem I found initially was that one of my sound modules did not show up in the UVI browser at all. This is being reviewed by UVI and may be fixed with an update by the time you read this. I found a “workaround” that seemed to solve the issue by putting all my “drum machine”” dll’s in one folder and making that the only folder that DR scans. This also speeds up the scanning process and is a good way to force DR to use a specific set of sound modules – I mean how many do you really need! One real limitation is that DR does not recognize VSTi3 at all. So if your drum modules are VSTi3, you’ll need to get VSTi2 versions installed – I did this with two of my drum programs to gain access to them. 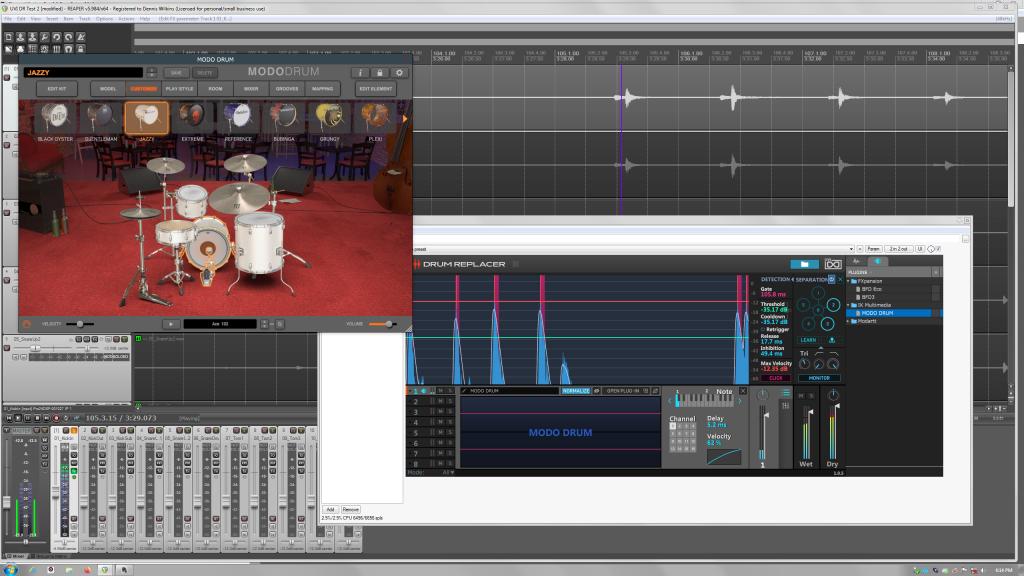 The other unique feature of DR is the Separation module which uses “machine learning” to separate the incoming signal into spectral components. UVI correctly do not claim this as “artificial intelligence” but it is a very effective process that separates the source sound into fives bands of key sounds plus a residual channel which is mostly very high frequencies like hi-hats and the top frequencies of cymbals. You can use a Monitor button to hear what these bands sound like, and there is a handy Click button that will produce a beep for each trigger even without using a VSTi or sample sound. And the upper trigger display enables viewing exactly what the detection circuit is seeing – adjusting the Gate time and the selection of Separation bands can really improve the accuracy of the trigger pulses.

One fascinating use for the Monitor feature is to use the monitored sound directly as a layer to enhance a drum sound without even using a sample or sound module! I had to route the original kick sound to a parallel channel, but the result was impressive. The DR user manual doesn’t promote such use, but the UVI official Drum Replacer video (below) does indicate how useful this can be – if you have a kick or snare track that is fine but picking up more cymbal bleed than you want, you can keep the Monitor on, uncheck the Residual button and you will get a cleaner drum track (see 13:22 in the video). I found this works very well.

The Separation module helps DR identify the drum sound you want to enhance or replace even when the drum performance varies over a song. I found it to work better throughout a song than other drum replacement software I’ve tried, although extreme variation in the source performance can still cause mis-triggering. In one “stress” test I used DR on a full drum bus so that it wasn’t trying to detect the kick from snare and tom bleed, but in a mix where snare and toms were right up in the mix. Using only the Selection buttons 1 and 2, it was able to pick out the kick almost perfectly and it worked far better than I’d expect. It ended up adding a few extra hits that made the kick performance different from the original, but they were perfectly fine improvisations! So maybe that’s a use that UVI hadn’t figured?

Back to Basics
I won’t say too much about the basic features since you can see more details in the linked video. Using sound samples (I tested WAV, up to 24 bit 96 kHz, and MP3 files, as if you’d ever use them!) you can load files into eight “slots” and they can be triggered either all together (layered – with a handy mixer window to balance levels), in round-robin fashion (both sequentially 1 to 8 and randomly), or by the intensity of the input sound so that slot 1 plays the lowest velocity and slot 8 the highest – although you don’t need to use all eight slots. How ever many slots you use, the sensitivity to the source waveform loudness will be split into ranges – for example, with four slots used (say 1, 2, 3 and 4) the waveform intensity will divided into four MIDi ranges: 1-32, 33-64, 65-95 and 96-127 which means that any drum hit that would have sent a MIDI velocity of 30 will activate the lowest slot, slot 1, and a hit that would have sent a MIDI velocity of 72 would play slot 3, etc. This enables you to use samples with different intensity or different qualities, and trigger them based on the original sound intensity. Very nice.

When using sound clips there are some useful editing functions available including levels, pans and waveform inversion. And there are some additional controls such as trigger delay (positive and negative), velocity and velocity curve (to adjust sound response to trigger velocity), a 3-stage envelope editor to shape the amplitude (Attack, Hold, Decay), polyphony to control how many sounds can overlap, and tune (+/- 48 semitones) with an auto-tune mode to match sample to source, very useful for toms. And the audio quality is impressive even stretching a sound a couple of octaves.

The VSTi hosting mode also has eight slots available, but you cannot mix VSTi and audio slots. It’s one mode or the other. When you use a VSTi sound module the MIDI velocities will be sent to the sound modules so you can have up to 127 different levels if your drum module has that resolution. And you can have different VSTi in the eight slots! So you can get some rather complex results by using sound sets and drum patterns that create creative interactions. There are also some editing features when using VSTi, but the VSTi host will provide the most complete control since it provides the sounds. DR still provides trigger delay (positive and negative), velocity and velocity curve (to adjust sound response to trigger velocity), and has MIDI settings (note and channel).

Using either samples or VSTi there is a real-time waveform display that shows both the source signal in red and the sample or VSTi signal superimposed in blue to enable alignment using the trigger delay. And using Ctrl (Cmd) and the mouse wheel let’s you zoom in for more precision.

Missing in Action
One function missing that other drum replacers have is the ability to send MIDI notes out to another track. While this may seem unnecessary with it’s ability to host a sound module, not having MIDI out limits what you can do. The good news is that UVI are actively working on a MIDI output feature which will be provided in an update, hopefully soon. In fact, I found DR already has MIDI outputs recognized by my DAWs, it just isn’t sending data out yet. This will also solve the VSTi3 issue and let you do all kinds of additional things, especially in REAPER.

The Drum Replacer window is fixed in size at about 1350 X 560 pixels which is an OK size, but variable size or several alternates would be useful.

One Thought
While the built-in VSTi is unique and interesting, it doesn’t really save any computing power since you still have to run the Drum Replacer and any VSTi’s you use. I tested cpu resources and found the total was the same whether I used a drum module inside or the same module separately (triggered by a simple gate to be sure the drum module was active). Also you still need to open the VSTi GUI as a separate window to set its parameters, so you end up with the DR GUI and the VSTi GUI opened on your screen the same as if they were linked via a MIDI output. The one difference is the audio path through DR can mix both the original source sound and the VSTi generated sound on a single audio track, which is clean and simple. No need for a separate instrument/MIDI track.

How Does It Sound?
In short, excellent. The triggering system is accurate and extremely flexible and although it takes some care to best tune in the parameters, the controls and displays make these adjustments fast. The included sound samples are of excellent quality, though limited number, but you can use any sound clips you already have (you likely have thousands) and of course VSTi sound modules.

Technical Details
Drum Replacer is available in Audio Unit, AAX, and VST2 – for 64 bit OS only. In my test system (PC Audio Labs Rok Box PC with 4-Core Intel i7-4770K, 3.5 GHz, and 16 GB RAM) a single instance of Drum Replacer used from 0.4% to 0.5% cpu resource with one slot holding a sample sound (no VSTi module). Using a VSTi adds the cpu requirement of the particular VSTi – I found FXpansion’s BFD Eco adds only about 0.2% per instance whereas IK Multimedia’s MODO DRUM adds about 1.5%. So no problem using several instances on individual tracks.

Conclusions
An excellent drum replacement/enhancement tool with more flexibility, better control and accuracy than any such device I’ve used before. The Separation module is unique and effective. And Drum Replacer is very reasonably priced. The few issues I found are being investigated by UVI and as reported the past few months in forums, they have been actively making improvements.

Excellent set of editing controls for both audio samples and VSTi.

Flexible mixer for both sample sounds and VSTi output with level, pan, solo, mute and a great combo LP/HP filter.

Can use sound files in a variety of WAV or MP3 formats.

Cons:
Minimum latency is 4096 samples so Drum Replacer is not for real-time live performance drum triggering – it is for drum control in a DAW project.

At time of this review there are still a few issues with some VSTi and some DAWs (for example, REAPER will crash if I try to use BFD3 as the hosted VSTi – Studio One has no problem with BFD3) – UVI are looking into these issues. Note these issues are only when using a VSTi within Drum Replacer – I had no issues using audio samples.

No MIDI output at this time but is in planned for release in an upcoming update – a MIDI port is already part of the design!

No VSTi3 support. This could be a problem in the future when no one makes VSTi2 sound modules, but UVI will no doubt add support when really needed.

Authorization requires an iLok account (free PACE system can be used) which can be a bit ‘messy’ to use.

The user manual, while clear in what it describes, is rather short and a bit light on details. Would benefit with a set of examples on how/why to use some of the controls.