I like to play electric guitar along with my favourite band's recordings and live concert videos on YouTube.

Before now I've had two ways to do this, both involved cabled set ups

1. Vox Amplug. A small dongle that plugs into the guitar jack. Cables needed were a) my (wired) headphones and b) a 3.5mm headphone jack output from my iPhone playing Spotify or my laptop playing YouTube . So 2 cables. Both were always a pain in the ass to manage as either my phone would get dragged to the floor from my desk or the headphone cable would get in the way of the strings.

2. A guitar head plus the following: a TwoNotes Torpedo load box / speaker simulator, an Eventide Space pedal and a mini mixer. the mixer was to add myself with stereo reverb to the play-along track. This sounded great but involved about 8 cables and took up a lot of space. If I wanted to use headphones for silent playing, I had the same dangling cable issue.

Waza translated from Japanese can mean technique or master craftsman - and the "Waza" in Japanese character writing on the headphone earpieces looks very cool to me. So time to master this headphone - and then hopefully on to mastering my guitar better.

It accepts auxiliary music input via Bluetooth. (Perfect for Spotify, or YouTube playback from my laptop or phone).

For your guitar there is a wireless, seemingly latency free connection (more about that later) guitar jack dongle

The Boss Waza amp technology is housed inside the (surprisingly lightweight) headphones.

Play-along music level is adjusted via your bluetooth source, so you phone or laptop's volume control.

As for guitar level, you simply blend in as much as you want via a dial on the right earpiece. Simples! 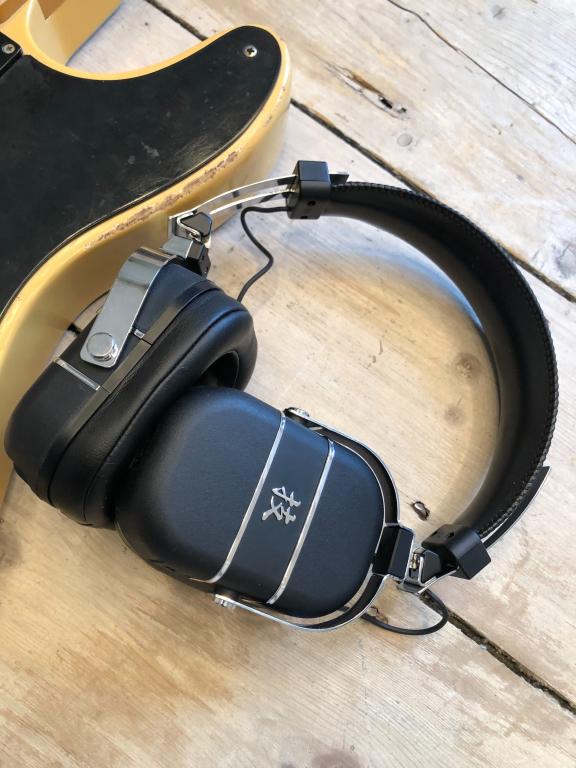 First thing I wanted to do was get myself happy with the music playback. I have some hearing loss from age and time in the biz so I like the high frequencies cranked up in my headphones to compensate. Luckily Spotify has a workable eq in its playback settings. I used the graphic eq to lift (a lot of) high frequencies to get to where I was happy. I took one star off sound quality not for guitar tone but because I had to add more eq to the headphones than I expected to. They are slightly 'dark' sounding.

Then on to guitar tone. I downloaded the Boss Waza controller app (available in iTunes App store and Google's Playstore) to dig in and fine tune preset 1's parameters. Visually on screen they are knobs but they rotate with up/down finger slides.

It took me a while to figure out the signal chain to strip back the delay and reverb on the preset crunch sound and add and tweak the parametric eq. I knew I wanted a spring style reverb and the Waza Amp has one. There is a lot online about Waza amps and I think the app controlled version in the Waza Air is great and very tweakable. The app tweaks are via Bluetooth Midi. So that's two Bluetooth connections. One for play along audio, one for Waza amp parameters and a 3rd, unknown type (!) connection between the guitar jack and the headphones.

Some people put the wireless dongle at the end of the chain on their pedal boards. (I suppose you set a general clean tone and let the pedalboard do its thing). I just plugged mine straight into the guitar.

While tweaking I was carefully pressing save a lot so as not to lose my tweakage.

At the time of writing I have saved just two sounds, a Keith Richards rhythm sound and a distorted Brit crunch power chord sound that I call Bad Company. No 'darkness' here - it was plenty bright - and the tone 'cut' just as I wanted it to. 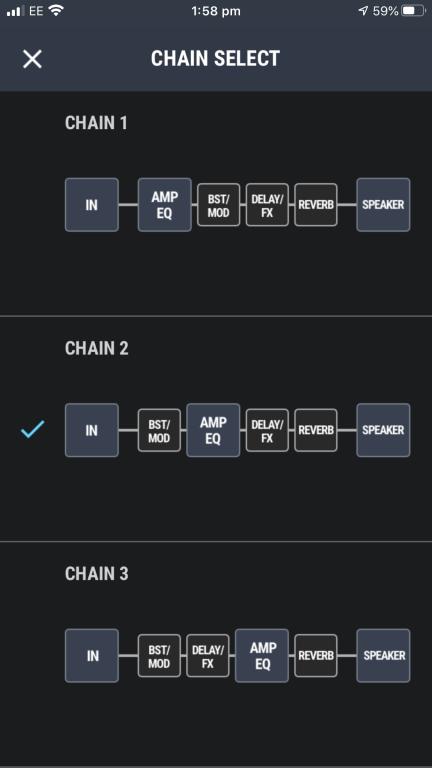 Play-along volume (and track eq) is controlled on my phone or Laptop. Guitar volume is controlled via the metallic look silver 'knurled' knob on one earpiece. Perfect!

so I took a break. I went back to play an hour more afterwards.

This is addictive and a great gadget!

There are a lot of presets and multiple pedal board style FX signal chains possible but all I really like to do is play along with Keith and the rest of The Stones - so I mostly just need a basic cranked vintage Fender Twin rhythm sound.

The Waza Air has impressive, optional, gyroscopic movement detection capabilities where either the band you are playing to moves side to side 'behind you' as you move to face left or right. And another setting that moves your guitar left and right 'on the stage' depending the way you turn. I gave these all a try but quickly determined that I like to be centrally panned with a solid, fixed stereo of "the band" behind me. I may return to experiment with these in future...

The real "miracle" of the Boss Waza Air - is that the wireless connection from the guitar jack dongle to the headphone amp unit is NOT Bluetooth but a "proprietary Boss technology" so doesn't suffer the latency you would expect from Bluetooth. (educated guesses are that it uses Wireless Lan but Boss would not confirm or deny this when questioned on it)

As for any latency in the bluetooth play-along track transmission - who cares? It starts when you hear it and you play along! Simples! Bluetooth latency is a non issue there. Perfect!

If like me you make excuses not to play because of the time it takes to set everything up - this is the IDEAL home / travel / hotel room practice rig.

Very recommended!
Review this product Get the facts