It sounds great, it's very flexible with several voicings...very good value for money.

Now you see it:
Having previously reviewed the Spirit LDC and Starlight SDC microphones, I had high hopes for the Aston Stealth dynamic mic and I wasn't disappointed. Two cliches: the Aston Stealth is 'worth it's weight in gold' and 'if someone doesn't make hit record with the Stealth, I will eat the box.'

OK a bit of hyperbole but I'm impressed with the Stealth and with good reason. It sounds great, it's very flexible with several voicings, and it represents very good value for money.

First to clear a couple of misconceptions about appearances: the body looks similar to a large-diaphragm condenser but it's a dynamic mic and it is addressed from the normal 'pointy end on' dynamic position.

Aston Microphones have continued to innovate: an in-built selectable Class-A preamp (that auto-senses phantom-power); the suspension is in-built and the mic simply screws into a stand. No pop filter is needed as protection is in-built. 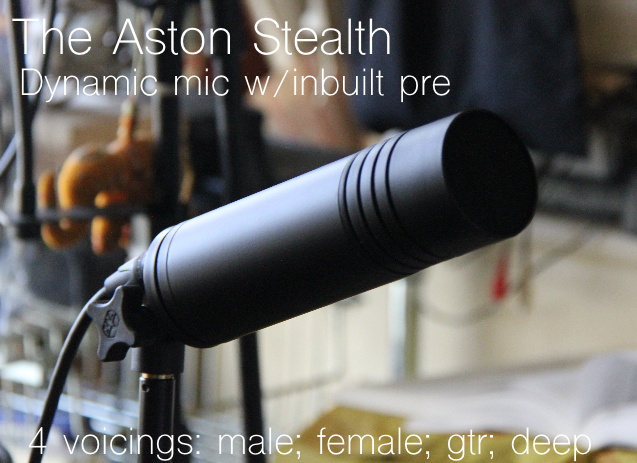 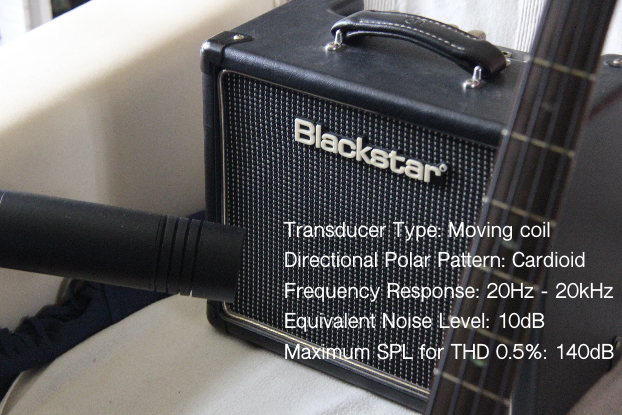 the design process:
James Young of Aston discussed the process of design whereby a panel was presented with the sound of prototypes and favourites were chosen by a panel of pro audio experts. From this informed knowledge-base, the Aston Stealth was designed. This 'bottom-up' constructivist approach differs from the processes of manufacturers who will design from 'top-down' - a targeted market sector at a price – which can often lead to design or manufacturing compromises.

As noted previously, it's refreshing to see a 'design-by-committee' approach working well across a range of products; in effect design by people who will actually use the gear rather than someone who will never use it.

The Stealth has a moving coil transducer – similar to many dynamics mics: in this system the sound pressure of the source moves a diaphragm attached to a moving coil in an electromagnetic field, and this interaction produces the electrical signal.

The Stealth's body is larger than many dynamic mics (people have confused it for the larger condenser mics) and this is due, in part, to the internal suspension (three Sorbathane hemispheres) and also the inclusion of an internal Class-A preamp which auto-senses the presence of 48v phantom power and switches on the circuit giving extra gain and headroom. This is another first from Aston! 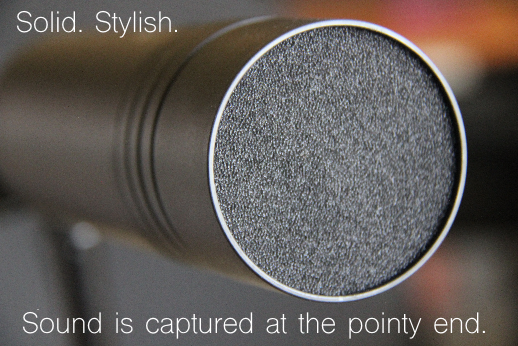 What? No lasers?
Aston haven't included any lasers (as featured on their excellent Starlight mic) on the Stealth. There is a fetching backlight in pale purple which kinda looks cool and denotes the presence of the mic which can disappear in a dark or shadowed environment like a ninja. Unlike the Starlight, the Stealth backlight doesn't (detectably) affect the audio signal and can be turned on/off via a button recessed on the bottom. It does require phantom-power to light up. 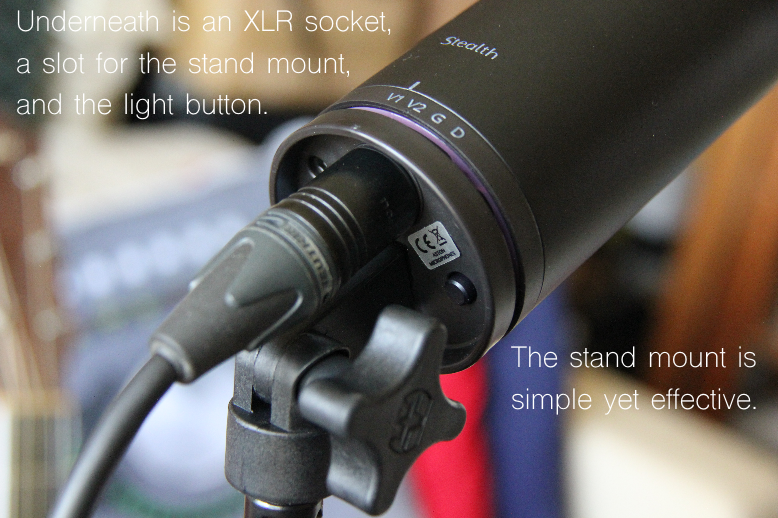 Dial M for meh:
Surprisingly the rotary dial to switch the voice settings is a bit meh. Most unlike Aston! The dial which switches between V1, V2, G, and D, is a plastic rotating sleeve inset around the circumference of the mic body. It has a smooth surface and is sometimes hard to grip and rotate especially from the 'talent end' of the mic. It does loosen up after a few uses but the clicks are a bit indistinct and with the muted legends it's not always easy to see which voicing is set. This is the weakest link on an otherwise well-engineered mic but not enough of an issue to lose a Gearslutz point especially given the price point. A milled steel or alloy version would probably have added quite a bit to the cost.

Aston say that the ring is designed to be quite tight so as not to be accidentally moved and in retrospect, this seems like a positive feature on a dynamic mic.


The Voice:
The four voice settings (eight if we include the powered-versions) are well-judged and make the Stealth suitable for a variety of roles and this adds to the mic's usefulness and value.

The V1 setting is suitable for male-ish vocals; the V2 for stereotypical feminine vocals (less deep); G is for guitar; and D (Deep) has, what Aston describe as, a gentle ribbon-mic style roll-off of the higher frequencies. Apparently the naming of the V1 and V2 as male/female oriented voicings 'created some ripples in the pond of political-correctness' but I think it is appropriate. Obviously different voicings will suit different sexes, genders, styles, genres and circumstances and the important thing is that they are available whatever they are called.

Historically, in musical nomenclature, adult males voices tend to be (from low to high pitch ranges): bass, baritone, tenor, counter-tenor; and adult female voices: contralto, mezzo-soprano, and soprano. As a kid I sang soprano but could not compete with Janet who could hit a 'top A.' Obviously there are exceptions. Whichever terminology one uses, the actual voicings work well. 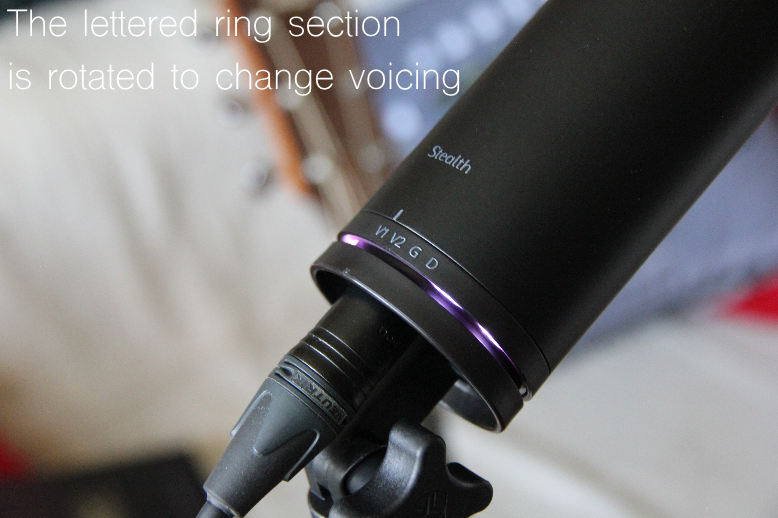 Audio tests:
I recorded 3 drum hits, 3 spoken words, and 3 acoustic guitar strums/single notes for each of the 4 voicing in unpowered (passive) mode and then repeated with the phantom-powered Class-A preamp on (active). The audio was tracked at 48kHz/24-bit (via a BAE 1073mpf preamp and RADAR Studio conversion into Propellerhead Reason DAW; files exported as WAV and then mp3 in Sony Sound Forge.

After listening through several times when tracking and editing I can clearly hear the distinct characters of the different voice settings (V1, V2, G and D): V1 accommodates a deeper vocal whilst V2 emphasizes that maleness to extreme and has a more mid-clarity and high boost; the G 'guitar' setting is brighter and mid-rich with a bass/high roll-off; and D 'deep' has a subdued tone but still clear, present and dynamic. The difference between passive and active modes is heard and the preamp sound of the Stealth is clear and bell-like and this is shared across the four voices bringing them closer in mid-range character than the passive, unpowered voices. 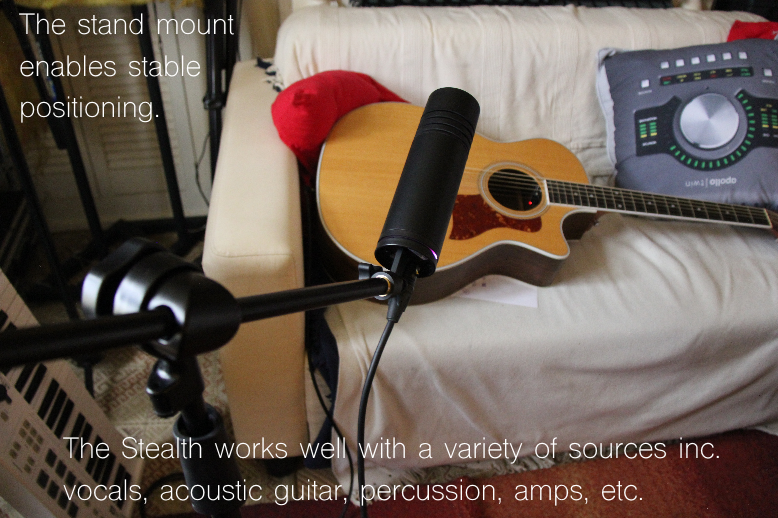 Conclusion:
Once again Aston have pulled a rabbit out of the hat – but the Stealth, like their other products, is no cheap magician's trick (and of course no rabbits were harmed). The Stealth is a great-sounding, flexible and well-made mic that offers innovation and unique features. Despite being a dynamic mic it shares some sonic and practical attributes normally associated with large-diaphragm condensor mics especially in terms of energy and fullness and range of sound. The voicings are genuinely useful and all sound great.
Highly-recommended.


Gearslutz Score.
Sound quality 5/5 Smooth, easy ride with none of the problems usually associated with dynamic mics e.g. muffledness, indistinctness, powerlessness. Good clear audio with pleasing timbres.
Features 5/5 Eight voicings. Effective internal suspension. In-built pop filter. Good mounting system. Auto-sensing phantom-powered Class-A circuit is a genuine innovation and very useful.
Ease of use 5/5 The only real difficulty is deciding which voice/position to use as they all sound pretty good. The rotating dial is the only weak link.
Bang-for Buck 5/5 Really, you're getting more than one mic. Super build quality. Stylish. Sonically-significant.