Although I haven’t been recording in live venues for years, the idea of a phantom powered preamp for dynamic and ribbon mics in my studio has been tempting. In fact, I thought of building a simple inline module a few years ago, but didn’t get around to it before Cloud Microphones introduced the Cloudlifter, which, when you think of it, is a rather obvious idea. Condenser mics always have an onboard amp/impedance converter, and dynamic mics, including ribbons, with their very low outputs, typically 20-25 dB lower than condenser mics, are usually expected to work directly connected to a preamp. This can require the preamp to be run near its maximum gain which often creates a few problems. First, with some “more affordable” preamps the highest setting may bring up considerable analog hiss and digital noise. Second, the frequency response of many preamps rolls off at the highest gain setting, dropping up to several dB at 20 Hz and 20 kHz. And third, the gain control of many preamps has low resolution in the last 10% or so of the control range, making it difficult to set it near the maximum setting.

And anyone needing to feed a dynamic mic signal over a long cable, and possibly in a venue with lots of electrical interference should really benefit if the unit does what it claims. Even with the very best preamp, any hum and noise picked up by a cable will be amplified, so increasing the mic signal by 28 dB will reduce hum and noise by the same amount.

My Focusrite interface doesn’t suffer from any measurable noise at the highest gain, and the lowest and highest audio frequencies drop only tenths of a dB at maximum gain, but the gain control is very touchy near the highest gain setting. I figured the Dynamite might be worth a look and listen even in my electrically quiet studio. 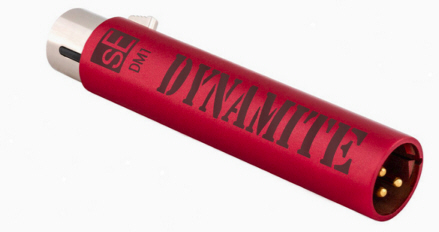 The sE Dynamite Inline Preamp with XLR input and output.

The tubular case is metal and feels rugged enough to drive a truck over it without damage (I didn’t try this, however!). It weighs less than three ounces (80 grams) and is under four inches (about 96 mm) long. The finish is excellent, pins are gold plated, mic lock works smoothly, and it feels very solid overall.

The Dynamite requires 48 Volt phantom power, but does not send it on to the attached microphone. It consumes a modest 3 ma to operate its amp. It is intended to provide a nominal 28 dB of gain to passive dynamic microphones including ribbons. The preamp is best attached directly to a mic so that the full cable length carries the boosted signal for maximum noise immunity.

The Claims
The Dynamite specs indicate a gain of 28 dB which is a voltage factor of 25 times. In other words, a mic that generates 2.8 mV at a given sound level (such as the ubiquitous SM58) will be boosted to 70 mV. Furthermore sE indicate the output impedance is very low so that the input impedance of the preamp following the Dynamite will not affect this gain significantly. They do, however, suggest a preamp with an input impedance of at least 1k Ohm, but my tests found even 300 Ohms didn’t reduce the gain noticeably. They also claim Dynamite is very quiet, “ high-grade FETs provide supremely low noise” and in fact the cleverly designed storage box for the device (a red stick of dynamite!) states “DANGEROUSLY low noise design”. And the frequency response is specified flat to within 0.3 dB from 10 Hz to 120 kHz! So, what did I find?

The Tests
I found the gain of my Dynamite to be 28.9 dB at 1 kHz and it varied only +/- 0.05dB over a frequency range of 10 Hz to 24 kHz. That is flat! I measured the same gain with a direct signal measurement using Room EQ Wizard, and using a ribbon mic with an output impedance of 300 Ohms on a mic stand a few inches from a speaker. I did not (and can not) test it out to 120 kHz, but have no need for such bandwidth! Phase response was also text book flat - essentially zero degrees from 10 Hz to 24 kHz, meaning no signal inversion and no phase shifting.

Noise, EIN and Distortion
The noise spec is stated as “Output noise level: 9 μV (JIS-A)”. Although I couldn’t find a good description of this standard (a Japanese industrial standard I believe), this appears to be A-weighted rms noise. I’ve read forums where a poster asked what the Dynamite EIN (Equivalent Input Noise) is, and of course it’s 9 μV divided by the gain, or about 0.36 μV, which I assume is A weighted. In terms of dBu this is -126.7 dBu. My own measurements found 0.4 to 0.5 μV, but I was using full 20 kHz bandwidth, essentially C-weighted. And even 0.5 μV is -123.8 dBu, certainly nothing I would ever worry about.

Of course the 9 μV value can be directly compared to the expected signal level of the mic being amplified, and taking the Shure SM58 as an example, its 2.8 mV output at the standard 1 Pa = 94 dB SPL sound level would be raised to 70 mV, and the Dynamite noise level would be 0.009 mV/70 mV = 0.013 percent of the signal level, or down about 78 dB. This is equivalent to a microphone self noise level (usually called Equivalent Noise Level) of 16 dBA, which is low enough for studio work. The short answer is the Dynamite is very quiet!

Distortion was difficult to measure since using an input in the low millivolt range did not produce harmonics above the noise level. To get a clean reading I had to use over ten millivolts and found total harmonic distortion appears to be composed primarily of the second harmonic with a smaller level of third harmonic. Fourth and higher harmonics are much lower and contribute nothing really measurable to the total. THD measured from about 0.1% with 10-15 mV rms input (equivalent to about 110 dB SPL into an SM58) up to 0.2% at the highest level I tested (equivalent to about 125 dB SPL into an SM58). And the distortion level is even across the audio frequency range. This is good distortion performance, certainly below the threshold of human hearing.

Wire with Gain
If you are looking for a solid, high gain signal booster that almost meets the old engineering goal of a “wire with gain”, I’d say sE Electronics have created it. There are other mic boosters available, and I admit I haven’t tested any of them (be glad to do so if they send me one to test!). From what I’ve heard and read, other brands have higher output impedance (gain not as stable with changing load) and higher noise levels, but some have variable input impedance (to affect mic tonality) if that is of interest, and may be suited for your needs. For me, the Dynamite fits the bill.

Cons
Won’t work with phantom powered mics, but active mics already have an amplifier that should be matched to the mic capsule - and increasing gain of an active mic’s output will not improve its signal-to-noise level since both signal and noise levels are increased.
Red color may bother some people!