The scope: sonible presents their first zero-latency tool, and it’s not your regular EQ plug-in. Deploying the technologies previously developed on the standout freiraum and smart:EQ plug-ins, we are now treated with a “live” version that (as hinted on its name) is optimized for live sound applications or anything that requires the use of equalizers with real-time monitoring. As stated above, this is not your everyday equalizer: at first sight we have the usual parametric EQ with LP/HP filters but on top of that there’s a “smart” functionality that quite literally does a big part of the job for us.

I’ll give a few usage examples below which should better describe what smart:EQ can or can’t do, but here goes the features at a glance before we move ahead:

• Six fully-sweepable bands of parametric equalization with +/- 24 dBs of range, with options for bell or shelf on bands 2 and 5, and shelf or sweepable low/high cut filters with free Q (resonance) adjustments on bands 1 and 6.
Spectrum analyzer with pre/post options
• Input/Output level meters and output level trim
• Freely resizable interface - check the attachments for a big 1080p screenshot
• Smart functionality: select a profile or source (vocals, guitars, piano, kick drums, etc) and the plug-in will analyze the incoming signal and apply a certain equalization curve tailored for the desired source.
• The analysis process can be tweaked to take into account slow or faster timings per frequency band.
• The “smart” curve can be set to only analyze signals that are past the threshold setting or restrained to only consider a certain frequency range. The smart curve can also have its range of action limited through its corresponding knob.
• Supports AU, VST and AAX formats on Mac or Windows and is also compatible with Waves MultiRack Native. 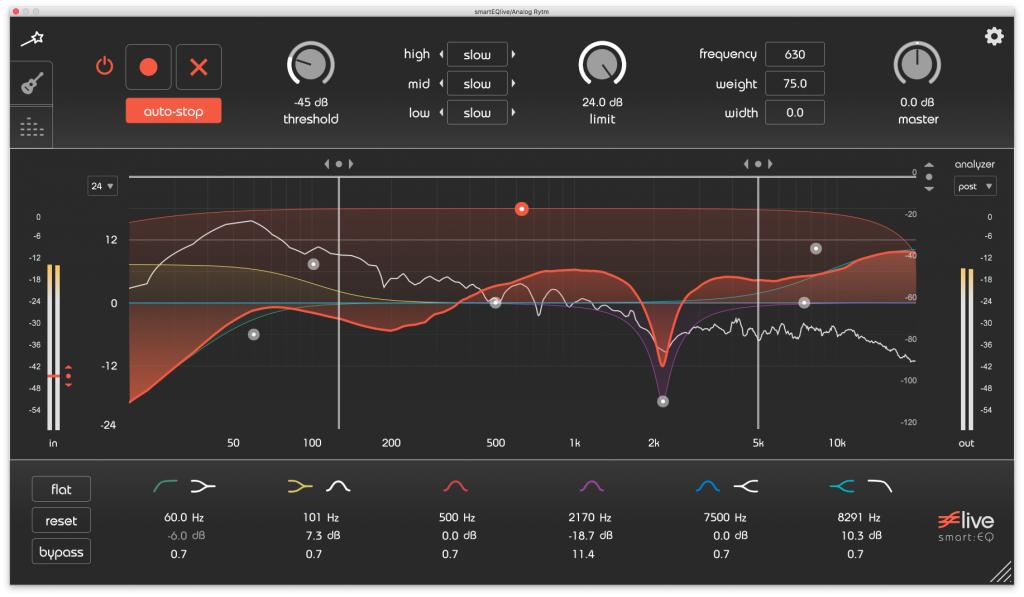 In use: Unfortunately I didn’t have the chance to try this plug-in in a live sound environment, so my tests were restricted to the studio setup. However, after over a decade of extensive work as a front-of-house (FOH) and stage monitor engineer, I’m confident that on my skills and professional experience to paint an accurate picture of how an EQ would perform under such circumstances.

As our audience probably knows, live sound engineering can be roughly split in two major categories: FOH and stage monitors. For the first I think that smart:EQ live will perform splendidly, allowing the operator to get mixes done fast, which is a key aspect of the job since time is a precious commodity when working on certain venues or events. Mixes have to do be done quickly, soundchecks are often rushed and having an EQ that speeds up the process is certainly welcome - and the feature set on smart:EQ live plays well into that. With that in mind, there are two ways to work with this plug-in: choose the desired sound source on the profiles and let smart:EQ live capture its average response and then tweak that curve if needs. Alternatively, you can do your adjustments like you would on a regular EQ and fine-tune with the smart functions. I can see it working both ways, but the first method should aid those who aren’t entirely familiar with EQs, and in this sense I think that this plug-in also provides a good educational value, and can be a good tool for teaching the basics of equalization for music mixing.

On the other hand, smart:EQ live has some limitations that will hinder its use for stage monitor equalization, most notably the absence of true notch filters and a limited amplitude range of +/- 24 dBs, which means it is a less than adequate candidate for cutting out a nasty resonance peak or pesky feedback loops that are easily found on stages with high sound pressure levels - things that are usually countered with deep notch filters. Lastly, I also miss an input level trim as there’s only an output level trim, and input trims are quite handy for any live or studio work.

For the studio smart:EQ live can work nicely as a “first line of equalization”, offering broad tonal changes and adjustments that will suit most mixing or even mastering situations. It can serve as a workhorse EQ thanks to its good feature set and transparent sound, only coming up short on jobs requiring super narrow cuts like on restoration tasks such as countering electrical hum on recordings or on creative tasks such as deliberately introducing comb-filtering effects. And again, the high-speed workflow can appeal to those working with rigorous time constraints and can’t really afford to spend hours EQ’ing the hell out of a drum kit.

The narrowest cut possible on the smart:EQ live compared to a popular EQ plug-in.
The Scores

Sound quality: If taken as a regular equalizer smart:EQ live is a fine processor, providing a clean and rather smooth sound both when cutting or boosting. I’d be happy to use it as such, but when the “smart” features are brought into the fold it becomes something else entirely, as the curves provided by this functionality can’t be obtained otherwise, layering high-precision tweaks to the equalization curve as seen on sonible’s other EQ plug-ins. And don’t get fooled by the looks of the curves obtained with this equalizer - after all, our eyes can’t hear a thing, right?

Ease of use: It’s quite an accomplishment to offer a tool with this level of complexity without overwhelming the user, but sonible managed to put it all together on a plug-in that should not present any big challenges. The presentation plays an important role, with an on board tutorial that clearly and concisely explains everything that’s shown on the interface. Speaking of interface, smart:EQ live GUI is quite clean and it can be freely resized to accommodate any screen size or resolution. There’s also a concise and well-written PDF user manual with 18 pages in case reading is preferred. Also worth of praise are the modest resource consumption and most importantly, it runs with zero added latency, making it a prime candidate for the “workhorse” EQ spot.

Features: I’m honestly quite surprised about the absence of notch filters on this plug-in, and to a lesser extent also surprised by the rather short amplitude range of +/- 24 dBs. Considering the fact that its prime focus is on live sound applications, these are aspects that shortens a bit its range of use, since the bandwidth can’t get quite short enough for notching nor it reaches low enough in amplitude. Other than that, the feature set is well-suited for its intended purposes and can tackle most situations where a parametric equalizer is required, be it on studios, live sound/FOH mixing or events with music or speech in general.

Bang for buck: The EQ market is quite a contested one, and perhaps one of the toughest areas of native plug-in development in terms of competition as there are many great offerings for all sorts of needs and pockets. It takes “something more” to stand out, and thanks to its “smart” functionality sonible managed to achieved that with this one. Priced at €229 (MSRP) smart:EQ live is not exactly super affordable although it is far from prohibitive, although it seems more viable for companies and independent contractors instead of individuals on home studios.

Pros:
• Clean and effective EQ with interesting yet optional “smart” function
• Provides good workflow for setting up mixes quickly, which is key for FOH work
• Light on system resources and of course, zero latency. That can’t be stressed enough!

Cons:
•Lacks proper notch filters and only has +/- 24dB of range, which hinders its use on stage monitor equalization or anywhere where needle-thin deep cuts are required.

Recommended for: live sound (FOH), recording and mixing engineers looking for zero-latency EQ with a facilitated workflow.
Review this product Get the facts