Presonus introduces the R80 studio monitors. These monitors deliver outstanding and realistic music reproduction, amazing clarity and superior transient response. The R80 features Air Motion Transformer (AMT) technology in the form of a 6.8-square-inch tweeter that responds superbly to the subtlest of waveforms to the highest frequencies perceived by the human ear. They also feature an 8-inch, custom-coated, woven Kevlar® low frequency driver which delivers a more consistent dispersion pattern across its frequency response range. This woofer is no slouch either, it’s biamped and driven by a 150W Class D amplifier. The R80 studio monitors are excellent both for the home studio as well as commercial post-production environments. The monitor’s main outer case is flat black in color with a blue colored faceplate which covers approximately 85% of the front surface, but not to worry if you prefer a traditional black color scheme, these monitors come with a black interchangeable faceplate. The R series studio monitors are also available in a smaller version, the R65 featuring a 6.5” Kevlar woofer. 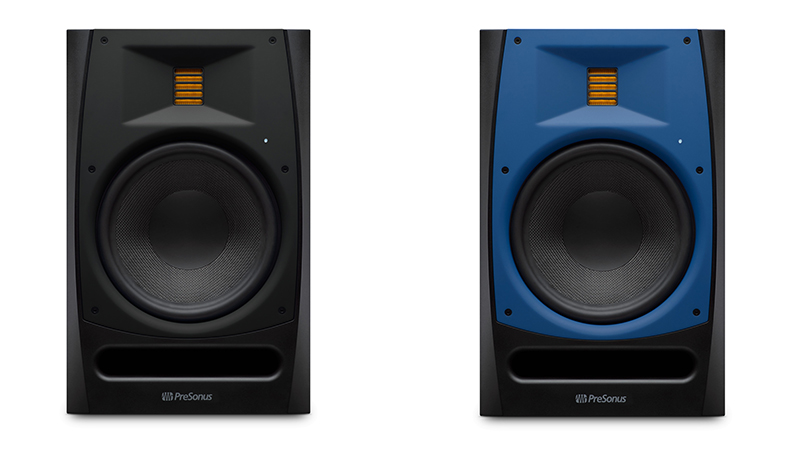 With an aesthetically pleasing design, these monitors look great whether mounted on a wall or placed on a stand. They are slightly smaller than its older counterpart, the Sceptre S8, and weighing at 19.8 lbs. they are no lightweights either, when it comes to superior sound reproduction and clarity. The design of the tweeter provides a limited vertical dispersion, which helps to reduce reflections from the ceiling and desktop that can cause phase coherence issues. The R80 can be customized with either the blue or black faceplates to match the look of your studio. The faceplates are held in place by six Allen screws and an Allen wrench is also included in the package. The R80 can be accommodated to suit any size space with the user-adjustable contour features of Acoustic Space (Linear, -1.5dB, -3 dB, -6dB), HF Driver (Linear, +1dB, -3dB, -6dB), and Highpass filter (Linear, 60Hz, 80Hz, 100Hz), which are located on the back of the monitors. They can easily be connected to an audio interface, mixer, media player, or other line-level source utilizing either balanced XLR or ¼” TRS as well as unbalanced RCA line-level inputs.

The monitors were set up in a 13.5’ x 12.5’ room and calibrated as per the manufacturer’s specifications. They were placed on a studio desk, with built in angled studio pedestals, at a distance of 64” apart. Medium sized shock absorbing stands were also used to eliminate potential vibrations. The monitors stood at ear level height while sitting at the desk. I connected them to a Steinberg UR824 interface via balanced ¼” TRS cables. To evaluate the character of the monitors, a series of high quality samples were used including various drum kits, orchestral symphonic samples, several HW synthesizers, recorded vocals, and various other instruments including electric guitars. The first thing that captured my attention was the crisp and clear highs coming from the AMT design of the tweeters, while at the same time I was blown away by the wide stereo image that was being projected by the R80's. Let me tell you, the transparent sound quality is phenomenal, and I’m very impressed by the twitter design and superior transient reproduction. The tweeter assembly utilizes an extremely thin, folded Kapton® membrane (<0.01 mm) with an inlayed aluminum circuit functioning as the voice coil, allowing the tweeter to move at the same instant as the electric current. When listening to the orchestral samples I felt as though I was smack in the middle of a concert hall! These must be heard to be believed! During the EQ phase of a mix is where you can also appreciate the pristine clarity of the AMT technology of the tweeters and the tight punchy low end of the woven Kevlar® low frequency driver.

Sound Quality: The sound reproduction is both amazing and spectacular. Highs sound ultra clean and refreshingly crisp. What’s most impressive about the R80, is the accuracy of the sounds it reproduces as well as the wide stereo image that's projected when playing back a mix. Synthesizer waveforms, tones, and semitones supernaturally spring to life and almost take on a lifelike form of realism when played through the R80s. The sound reproduction, clarity, and realism are so incredible that it gives one the impression of being right there in front of live performers when the music is playing.

Ease of use: Very easy to set up and calibrate using the manufacturer’s recommended specifications. Adaptable to various pieces of equipment including audio interfaces, mixers, or other line-level sources.

Features: The user-adjustable contour controls on the back of the monitors are exceptional in their ability to customize the sound for any size room environment. Interchangeable blue or black faceplates is a definite plus to match the décor of your studio.

Bang for buck: Very reasonably priced for a mid-level monitor with so many features and most notably the superior sound quality.

Overall: The R80 delivers spectacular sound that will make any mix sound its very best. This is a superior mid-level monitor that will proudly stand and perform beyond your expectations, whether in a home studio or commercial post-production environment. The R80 is capable of producing professional results and are ideal for mixing and mastering.
Review this product Get the facts