The fifth iteration of the industry-leading audio repair tool. 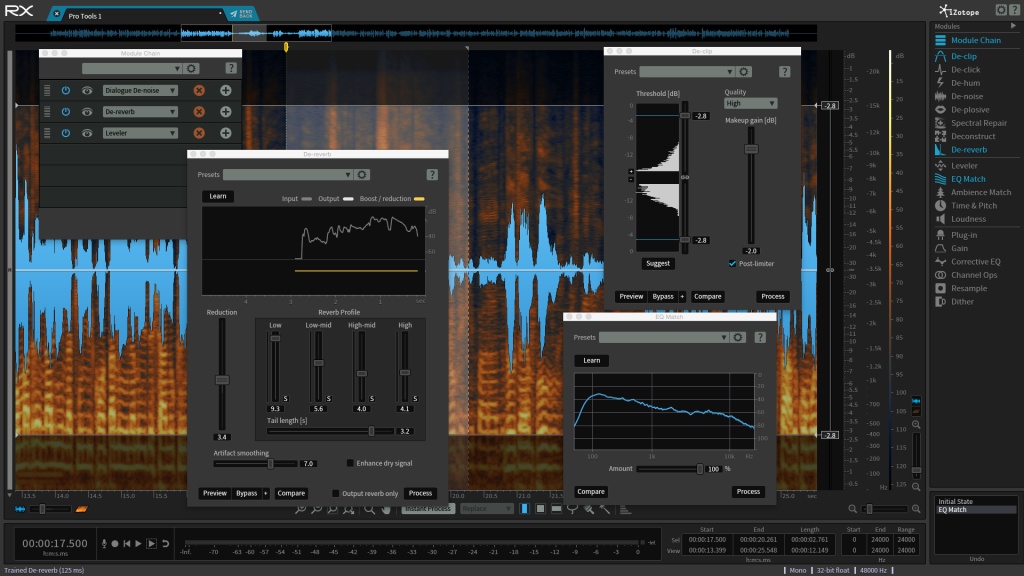 Having a set of audio repair tools is definitely one very desirable in most studios and on some they are just mandatory - any serious post-production facilities and mixing or mastering studios are bound to deal with damaged audio at some point. With that in mind, the question is: which one to choose? Fortunately for us this segment shows a busy yet not crowded marketplace, with a handful of great sounding and very capable solutions competing for attention but far from the over-saturated equalizer and dynamics segments. Having said that, the fact that not many developers put their efforts on making audio repair tools can be attributed to some extent to iZotope RX’s existence. Released back in 2008, RX simply took over. With an effective and powerful set of tools of the highest quality and a straightforward editor, iZotope pretty much dominated the market and although there are still some good competition out there, it’s safe to say that RX became a reference. We’ll go through it’s fifth iteration to see how far it goes in 2015 and if it manages to keep its crown. I’ll try to break down the editor’s major features, then do a brief run on the modules to wrap it all up in the end with scores.

RX’s audio editor features a clean layout with a very nice waveform and spectrogram display that can be customized to blend both visualization modes, offering a great deal of information about the amplitude and frequency of the audio material in place. The editor also features a clip-gain line, which provides very easy gain adjustment of the audio before it hits the modules. Right-section of the interface houses the modules - which I’ll go through in a moment and visualization options for frequency and amplitude. Lower section provides scrolling, further visualization and zoom controls, and the tools you need to select amplitude, frequency or time of the material and also a instant-process button that applies de-click, attenuate, fade, gain or spectral repair (replace) based upon common-use presets. This greatly speeds up the workflow and helps a lot if you’re dealing with lengthy material that needs a ton of small adjustments. Used in conjunction with the lasso tool it greatly straights up the process, allowing for quick repairs on the highlighted frequency, amplitude and time regions. Selection a region and right-clicking on the selection also brings up useful operations such as capturing the required frequency and amplitude information to feed specific modules that are based on frequency/amplitude “learning” functions such as EQ and Ambience match and De-noise. RX can also do audio recording with monitoring, which is good when doing restoration and archiving work since you can capture the material and keep everything within RX right from the very beginning. RX also comes with WAV, AIFF, FLAC, OGG import/export codecs so all bases (minus Apple codecs) are pretty much covered.

The RX modules and the Module Chain

Before I go through each module, I’d light to highlight one of the coolest RX features, the Module Chain, which lets the use combine multiple RX modules, providing a quick way to process audio with module-combos that you already know will work. I should mention that that the De-clip, De-click, De-crackle, De-hum, De-noise, De-Reverb and Dialogue De-noise modules are also offered as standalone as standalone plugins for your DAW, albeit at the cost of considerable latency and CPU resources on most cases. Nevertheless, it’s a welcome alternative to using the editor when you really need to deal with something live and/or with varying settings.

Using RX Connect, which links your DAW and RX, cleaning audio with RX without leaving your DAW is quite a breeze. You just need highlight the parts of your audio, select Connect from the Audio Suite menu and send the region to RX as a “round trip”, which means I’ll treat the audio with RX then send it back to Pro Tools. RX will open up, apply the desired processing, click the “send back” button and commit the changes with RX Connect. It hardly takes a few extra clicks than using the standalone app and I’d say it’s very much worth it. To test the RX-DAW integration I took a 2-track live recording of a music performance with vocals and acoustic guitar, which had over an hour of material to be edited. The performance was very good, but plagued with technical issues so I had to remove hiss from the not-so-quiet noise floor, clicks/crackles from bad connector on the guitar, attenuate clipping on the vocals track, rebalance the piezo mic from the acoustic guitar. In short, the material had to be repair and made viable for mixing and mastering, and so I went hundreds of times through the processes of “select audio - RX connect to send to RX app - work miracles on RX - send back function - render”. Over and over and over again until all clips were crystal-clear. Integration with Pro Tools with pretty flawless in that regard, and I’ve found myself working quite fast - RX’s stability was great in that regard. One thing that helped me to work easier was RX’s “monitor” plugin, which allowed me to monitor the changes through your mixing chain.

Sound quality - 5/5: Arguably the best sounding set of tools in the audio repair segment, RX can do things that are borderline science-fiction and will challenge common beliefs of what is possible and what is not. All around RX offers the best quality processing you can get but some of the modules really stand out, like the remarkables De-click and De-clip and also the extremely competent De-noise. De-clip really saved recordings that I initially considered unviable for anything serious, it’s really something special and would do great on a simple plugin on it’s own - I think I’ve said the same thing a number of times to be honest...but a man can dream. De-reverb and Ambience match are also worth mentioning and they’re arguably the best tools on their categories, providing spectacular results. Overall the sound quality of the modules are amazing, they became industry standards for very good reasons and will be very hard to be topped.

Ease of use - 5/5: RX is mostly accessible and easy to use, I say “mostly” because some of the modules have a steeper learning curve than others. I’d say RX is “easy as it can be” and in that regard it is expected that removing the room fan with Spectral Repair poses a tougher challenge than removing simple clicks or lowering a high noise floor without killing your top end. On most occasions RX is in fact totally straightforward - the De-noise, EQ match and De-Reverb modules are surprisingly easy for what they can do and achieve. The standalone app is really a breeze to use, with clean and uncluttered interfaces not only for the main editor but also for all the modules Using RX inside a DAW with the Connect plugin is a bit more laborious since you have to set up the Monitor plugin and RX’s output accordingly, but it’s nothing complicated. There’s also the possibility to use the provided plugins for most of RX modules as regular plugins in your DAW and that works well on some occasions but since the Connect/Monitor setup was so easy I ended up rarely using them. I should also say that the documentation is nothing but stellar, with a big HTML help file that covers everything in great detail, with a very clear language that really helps to get the best out of each module and of RX as a whole. If that wasn’t enough, iZotope recently released a website with a ton of tricks called the “RX cookbook”, with a good search mechanism that allows users to sort articles according to each RX version, module or real-world application - definitely very helpful resource that adds further points to RX’s ease of use.

Features - 5/5: Both standard and advanced versions are spectacular in terms of how much they pack. Needles to say that the advanced version provides greater depth and audio processing options that makes the “advanced” label a very deserved and rightful one, but standard version is also very well featured and will cover most common scenarios. Nevertheless, in true Gearslut fashion, I’d totally welcome less offline processing and more real-time action. I can understand the reasons behind “not having so much online processing” but it’s not a distant reality as computers are always getting more powerful and in that regard I’d like to see better online processing with lower latencies in the future.

Bang for buck - 5/5: Once you start using it, RX quickly reveals itself as an immensely valuable set of tools and it’s hard to imagine life without it. However, the gap between standard and advanced version still feels like it’s a bit too wide despite iZotope’s efforts to narrow it. Nonetheless, RX Standard offers an unbelievable bang for your buck and I would give it a six out of five stars if such score was possible. On the other hand, I feel like the bucks required for the advanced version are a bit too much and I’d welcome some further licensing options for single modules, two/three modules combos and anything that lessens the burden our pockets. Pricing debates aside and regardless of which version you end up choosing, RX is an investment that quickly proves to be very worth making and RX really inspires a lot of confidence.

The verdict: iZotope’s RX 5 arrives on its fifth iteration with as an extremely well rounded and matured solution to rescue your recordings most problematic moments and to save yourself a world of troubles that you’d end up without it. RX is the closest thing to insurance when it comes to audio recordings and it feels like having a safety net when you have no options other than face the situation and roll with that problematic recording. That might sound a bit dramatic but it’s definitely the case when you starting using it and the miracles start to line up in front of you. What RX can do can not be described in other terms. It’s really a decisive tool that can make a huge difference, both when turning bad recordings into something that can actually be used and when some polish is needed on less than stellar recordings. Once you realize its power, RX becomes almost as necessary and indispensable as your DAW.

Recommended for absolutely all professionals or studios dealing with any aspect of audio, be it on post-production for other medias or on mixing and mastering music. RX is also an indispensable tool for professionals doing forensic, restoration and archiving works.

Post-script: As I was on the closing stages of writing down this review, iZotope recently launched Dialog De-Noise, De-clip, De-click and De-hum as 4-plugin package called “RX Plugin Pack” that furthers the options for new users. As I’ve mentioned above I believe some of those would make fine products on their own, especially Dialog De-Noise and the incredible De-clip, and this package is a very welcome addition to their audio repair tools and a good entry ticket to RX’s universe. At $129 (MSRP) the pack definitely has some great value but I missed an upgrade path to RX Standard at a friendly price. As their past actions have show, iZotope certainly is not afraid of changing their pricing and distribution strategies so it will not come as a surprise if we see that happening at some point. Nevertheless, I really have to applaud the effort they’re making to make these tools available to a wider range of people and their respective budget limitations.