ValhallaRoom by ValhallaDSP is a natural, rich sounding algorithmic reverb plugin that is almost untouchable at its price point.

INTRO
ValhallaRoom by ValhallaDSP is a natural, rich sounding algorithmic reverb plugin that is almost untouchable at its price point. Nearly everything about this plugin is a painless pleasure. It’s easy to purchase, download (short wait for the link), install, authorize, launch, load (presets), tweak, and achieve an ear-pleasing room sound. The interface is neat, clean, straight-forward, responsive, intuitive, and visually pleasing. It’s easily scalable by grabbing and dragging the lower right corner of the GUI. However, I find the default size to be just right. It has a simple, yet effective color scheme, which proves that less is often more. To call it “no frills” is partly accurate, but it’s not cheap looking. It may be two dimensional, but it’s classy. There is no graphic display, which took me a little getting used to as I prefer to mix with the aid of my eyes. I’m not sure if this is a con or really a pro.

The interface workspace is divided into two distinct regions. On the left, there are five bar graph style sliders (Mix, Predelay, Decay, High Cut and Depth) with a Reverb Mode just beneath that has a dozen algorithms. I believe this began with four and has been updated and expanded three fold.

On the right, there are EARLY and LATE modules that toggle in and out, sharing the same interface space. The*EARLY module attends to the size and character of the initial short-burst space with an emphasis on modulation and diffusion. The LATE module deals with the late reverb decay, including bass and treble decay multipliers, and the stereo width of the late decay. Independently setting the decay time for bass, mids, and highs is wonderful. ‬All sliders, buttons, knobs, and pull-down menus are easy to grab and very responsive.

This is a perfect first reverb for a beginner. “Self Documentation” is engaged and displayed at the bottom/left of the screen when the cursor hovers over any feature or parameter. This is an indispensable gizmo that cuts the learning curve down substantially. It will invite new users to scroll around experiment without scaring them away. 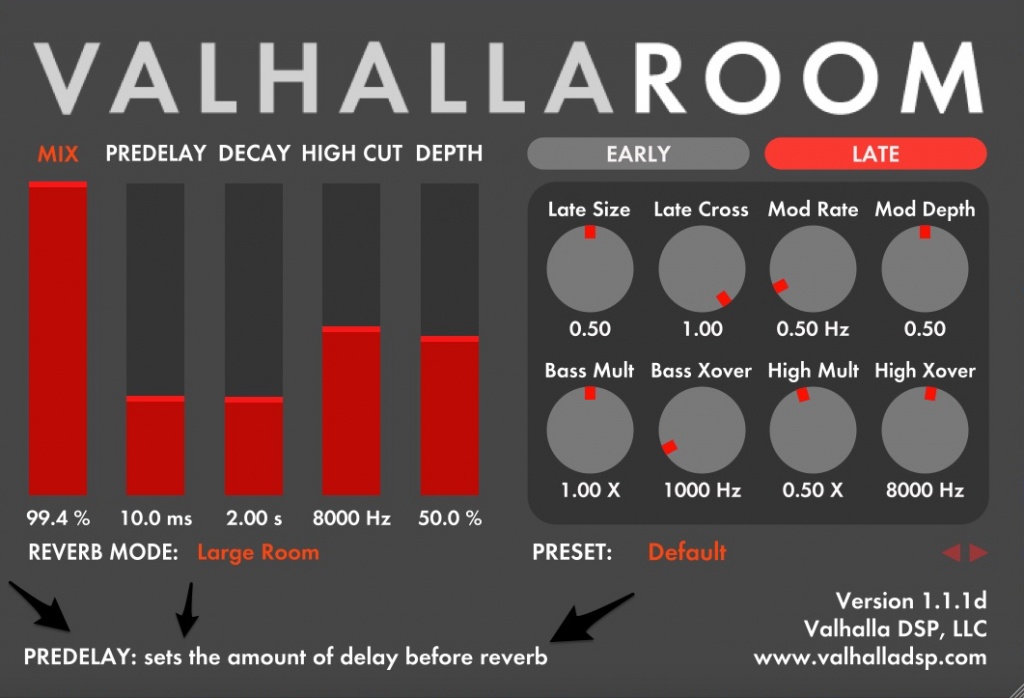 ValhallaRoom is also perfect for home studio musicians and professionals looking for a reverb that sounds fantastic and doesn’t get in the way. An important feature of any reverb is the quality of the tail. VRoom provides a smooth, creamy decay. The modulation is subtle and soothing. The chorus took me by surprise. It’s a nice bonus feature.

ValhallaRoom is versatile — capable of of anything from tight rooms to expansive realistic ambiences and everything in between. Cranking the decay control will yield some otherworldly effects. It should be noted that VRoom is does not specialize in crazy effects, hence the name, but it’s still capable of some cool ambient stuff. It’s also a very musical effects plugin that invites you to manipulate the parameters in realtime. To quote the developer, “Instead of creating a simple physical model of a simplified physical space, VRoom generates early and late acoustic energy that provides the spatial and phase cues needed to create an “idealized” room impression.” I didn’t see the point of paraphrasing. Well said! There are loads of well-managed, useable presets that sound good out-of-the-box and serve as a perfect start-point for tweaking.

FAVORITE USES
• Applied globally to the stereo mix
• Rhythm and arpeggiated guitar tracks will never be the same. 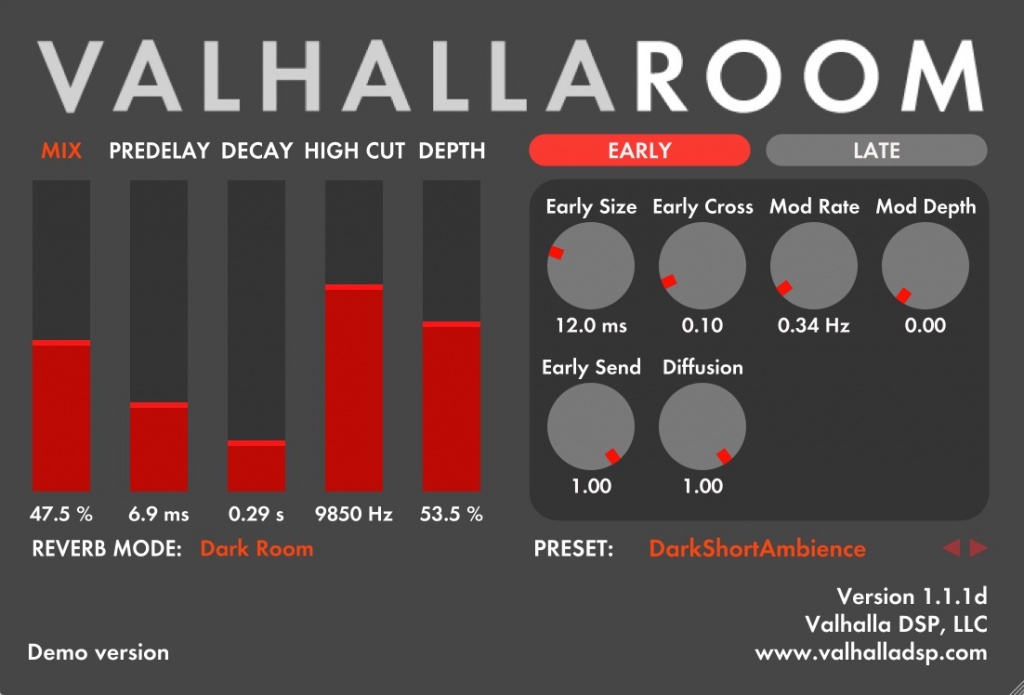 OTHER THOUGHTS
• Capable of surprising chorus effects by lowering the depth and raising the modulation. 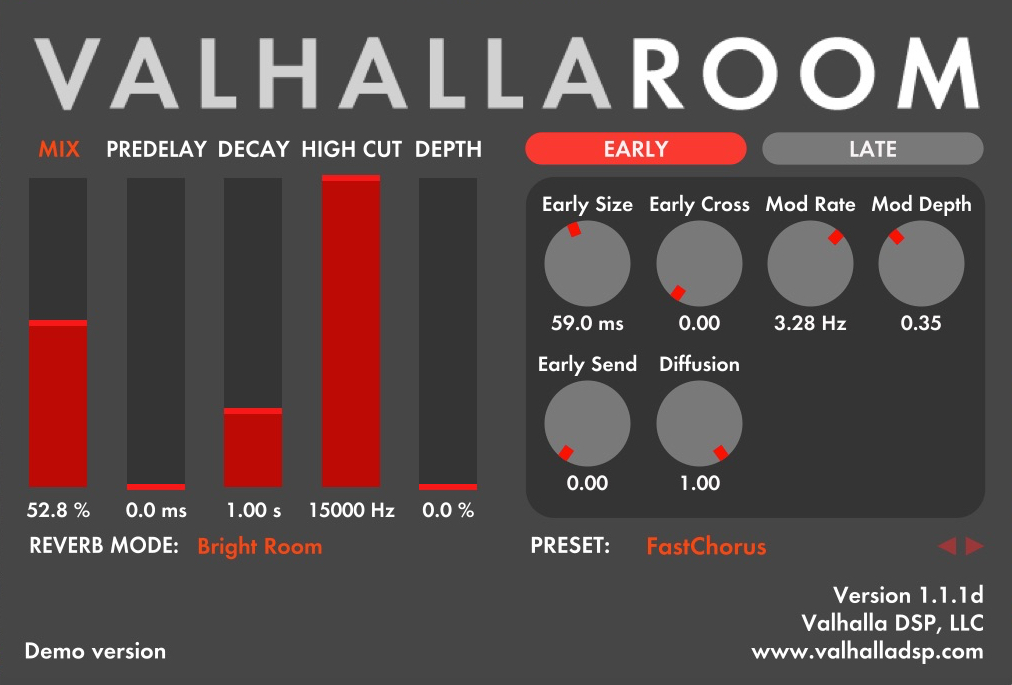 SUMMARY
ValhallaRoom is often compared to Lexicon. That, in itself, says more than my 900+ words. Is this my favorite reverb of all time? Well, it’s certainly one of my favorites! In truth, I have an ongoing love affair with another reverb, but since demoing this attractive gem, I may occasionally cheat! ValhallaRoom, a.k.a., VRoom has become a go-to workhorse for many, and for others it has become a creative sculpting tool for layering over and under other reverbs.

I highly recommend this fine reverb plugin to anyone working with digital audio. It’s perfect as a first reverb for a beginner, novice, or professional looking to spend more time making great sounding music and less time trapped in a bloat of features. It’s not perfect for someone looking for a zillion impulse response environments — It’s not a convolution reverb, but it is one heck of an algorithmic reverb plugin. Bottom line, this $50 reverb plugin sounds a lot more expensive! I give ValhallaRoom two well sustained thumbs up with a strong attack and gentle decay.
Last edited by Diogo C; 15th February 2016 at 01:44 PM..

This is not a review but an experience with this plugin, Valhalla Room.
My main use for this is to treat snares.
I insert on the channel.
I can make the snare longer, shorter, brighter, darker, fatter, also can change the length to fit into groove.
I tried those with others but no other plugin could do it with such ease.
It is not time strech, the tail of the reverb is so natural, it may act as the part of the source itself.
Some of my presets are attached as screen shots and valhalla preset files.